One of the biggest issues: The unrealistic expectations social media sets up about how life should be. Not only can seeing everyone else's perfect pictures make you feel your own life doesn't measure up, but recent research shows it can also hurt your finances. 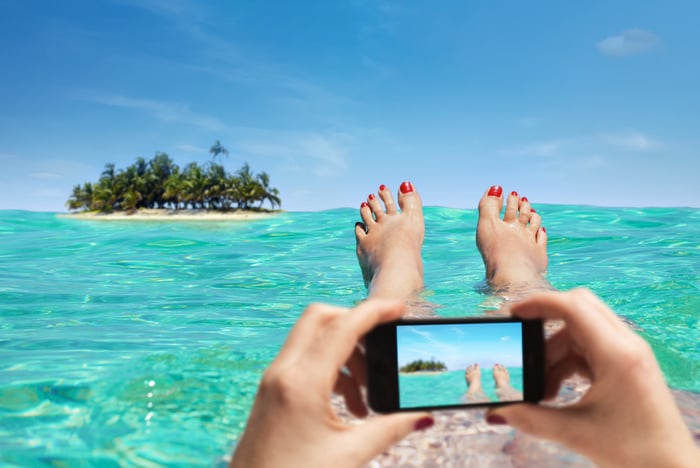 Social media affects the spending habits of millions of Americans

According to the 2019 Modern Wealth Index Survey conducted by Schwab, more than 1/3 of Americans have changed their spending habits based on their friends' social media posts. This change is definitely not a positive one, as survey respondents admit social media platforms are the biggest bad influence adversely affecting their spending choices.

Social media has such a detrimental effect on spending choices that 35% of all survey respondents admitted they spend more than they can afford on activities with friends, and 34% indicated they overspend on experiences thanks to their friends' social media feeds.

These excess expenditures are driven by feeds full of images of extravagant adventures that have caused 60% of Americans to wonder how their peers can afford them. They also happen because three in five Americans pay more attention to what their friends spend versus what their friends save.

How can you avoid overspending thanks to social media?

Staying off social media would be the best way to avoid the increased pressure to keep up with the Joneses -- but that's not likely to be a viable solution for most people who rely on their online networks for entertainment and social connections.

If you aren't ready to sign off your networks, then making a financial plan -- and sticking to it -- can help you avoid being swayed into spending more than you should by your friends' posts.

Schwab's survey revealed 60% of Americans with a plan feel financially stable, compared to just 1/3 of people with no plan who feel that way. Planners are also more than twice as likely as non-planners to save money monthly and to have an emergency fund.

If you have a clear financial plan, including long- and short-term goals and a budget to manage everyday spending, you're less likely to blow that budget just to keep up with your friends' adventures you see on social media.

It's also important to remember that social media isn't real life. Often, when your friends post seemingly unaffordable adventures on their feeds, those activities really aren't within their budgets. Instead, they may be funded by debt -- but your friends will never post pictures of the credit card bills.

Just say no to keeping up with the Joneses online

Overspending has long been driven by a desire to keep up with your peers, but social media has made things worse as everyone paints idealized pictures of their lives online.

Don't get caught up in the hype. Make spending decisions based on what's right for you and rest easy knowing that you have a plan to achieve financial security. Money in the bank to achieve your financial goals is worth far more than a bunch of likes on your photos -- and it will definitely make you happier in the long run.