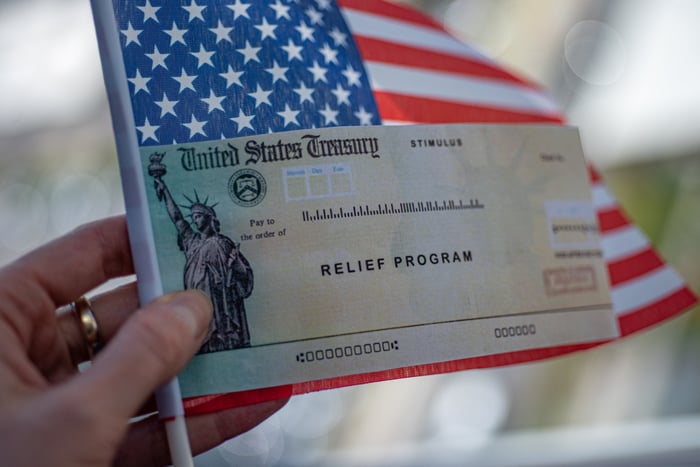 At long last, it's finally happening: Months of negotiations have yielded a second coronavirus relief package to follow up late March's CARES Act. The new deal comes at a $900 billion price tag -- a compromise many weeks in the making -- and includes boosted unemployment benefits, a second round of aid for small businesses, and, perhaps most importantly, a second direct stimulus check.

Earlier this year, eligible Americans received up to $1,200 per adult and $500 per child under the CARES Act. This second stimulus round isn't quite as generous, with individual payments topping out at $600 per eligible adult. But children will be eligible for $600 apiece this time, an improvement over the first round.

The big question, of course, is when will you actually get your money? Here's what we know so far.

Income limits will come into play

Just as there were income thresholds associated with the first round of stimulus checks, they apply this time around, too. This means single tax filers with no dependents earning over $87,000 won't be eligible. The same applies to married couples filing jointly earning over $174,000. These thresholds are lower than the previous limits of $99,000 and $198,000, respectively -- though many are wondering if this is a misprint and in fact the income limits will remain the same. This remains to be seen.

Who gets that money first?

Those who have their bank account details on file with the IRS will likely see their stimulus cash the fastest. Back when the CARES Act was signed into law, stimulus payments went out within weeks. Now that the IRS has a system for sending out those payments, it's reasonable to assume the first batch could hit recipients' accounts during the early weeks of January.

If you filed a tax return this year or last and received a refund via direct deposit, you could have your stimulus money fairly quickly. Similarly, if you haven't been required to submit a tax return (lower earners don't have to), but registered your bank account information on the IRS website earlier this year, you should land in a similar boat. The key is whether the IRS has a way to get you that cash electronically without having to deal with the mail.

Physical checks will go out later

As was the case for the first round of stimulus payments, anyone who needs to get a second stimulus check by mail will have to wait, since the IRS can only deliver about 5 to 7 million paper checks per week. Furthermore, if you don't have bank account details on file, you may get your stimulus cash via prepaid debit card. Many of those cards were issued during the first stimulus round and caught some recipients by surprise, because they may have looked like spam. But rest assured, the IRS-issued cards are legitimate. If you haven't shared bank account details with the IRS, don't be surprised if you end up with a debit card.

What about seniors on Social Security?

Many Social Security recipients get their monthly benefits through direct deposit. If that's you, you're in the same situation as any tax filer for whom the IRS has bank account details on record. If not, you'll get a physical check, which could take several weeks longer.

Sending out stimulus payments to the public will take time -- but possibly less time than you'd think. Considering the extent to which so many people have depleted their savings and racked up debt while waiting for that money, the faster the money arrives, the better.

$600 Stimulus Checks Are Coming: Who's Getting That Money First? @themotleyfool #stocks Next Article
Current