The new infrastructure bill puts over $1.2 trillion toward much-needed upgrades across the country. Investors rejoice -- this is money that helps you, too.

President Joe Biden signed H.R. 3684, commonly known as the "bipartisan infrastructure bill," into law on November 15, allowing for public infrastructure projects that have long been waiting their turn on endless lists to move forward finally. It's a big win for America, as aging infrastructure items are increasingly at risk of becoming safety hazards and traffic bottlenecks, but this legislation is also a potentially big win for real estate investors.

Money has been appropriated for every kind of infrastructure upgrade -- from the electrical grid to broadband -- as well as environmental clean-up and even replacing lead water pipes in neighborhoods across the country. Undoubtedly, this will have a knock-on effect for all kinds of property owners and investors. There are a lot of reasons the new infrastructure bill could be a win for you. 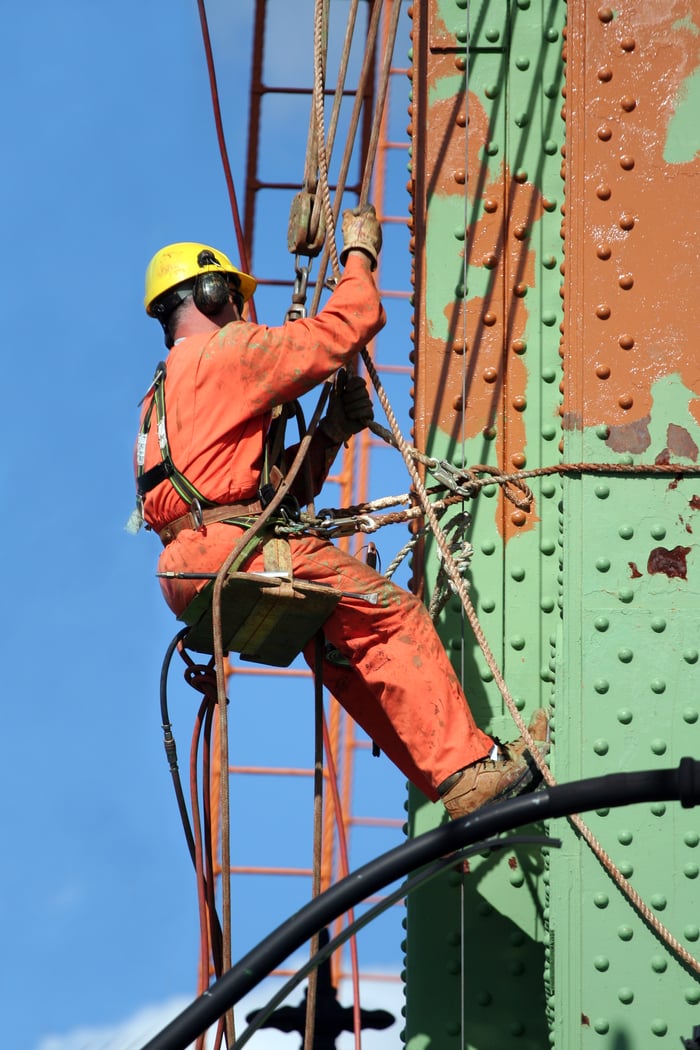 Neighborhood desirability will increase in many areas

The infrastructure bill's nature is such that there's a lot in it for everybody across all kinds of neighborhoods and communities. But it stands to disproportionately benefit older neighborhoods that have been allowed to slide into disrepair, simply by its nature. The bill's purpose is to repair and upgrade infrastructure, after all.

So, all those neighborhoods that continue to struggle with busted-up streets and ancient electrical lines -- and those lead water pipes I mentioned above -- are going to get a great deal of attention. The people who live there will see an increase in their living standards, which means that people outside any given up-and-coming neighborhood may decide to take a second look at the properties.

Suddenly, that older neighborhood that was falling apart has a lot of shiny new infrastructure, increasing the interest in it. This can be both good and bad, of course. Although the goal isn't to spur gentrification, it may happen anyway as neighborhoods become suddenly more desirable. Just like investors may see a spike in rental returns and property valuations, homeowners may see their homes' values increase. Hopefully, there will be backstops put in place to help keep owners in their homes in the face of unexpected rising tax valuations.

The infrastructure bill also includes $47 billion for helping to preserve properties that are affected by changes brought on by a warming planet, in addition to money set aside for things that will encourage more electric vehicles to get on the roads, like more electric-vehicle charging stations. That $47 billion goes straight to investing in infrastructure and tools meant to directly protect humans and properties in areas in significant danger from new, ongoing climate threats.

For example, the National Oceanic and Atmospheric Administration (NOAA) is slated to receive $492 million for tools to help better predict and model flooding potentials for inland and coastal areas. Other organizations set to benefit from this money include the Federal Emergency Management Agency (FEMA) and the Department of Agriculture.

A changing climate is one of the biggest threats to property values across the country. Rising oceans threaten to make thousands of miles of coastland totally uninhabitable. Wildfires burn structures indiscriminately. Floods force structural retrofits and cause renters and buyers alike to seriously rethink their interest in occupying properties in affected areas. This is all bad news for investors who are holding properties in regions that were previously popular spots and are now headed toward uncertain futures.

And even though $47 billion is probably just a very small percentage of what's going to be needed to adequately fight climate change across such a large country, it's a good start. The NOAA's tools that have already been promised -- funding, for example -- can help people living in affected areas to feel safer about staying there, rather than abandoning those places due to flooding potential. That's always good news for investors.

The bipartisan infrastructure plan has a lot for investors

Although the bipartisan infrastructure plan doesn't seem to really have much for investors, that couldn't be further from the truth. By supporting and building up communities, everyone -- renters, homeowners, and investors -- stands to benefit immensely. Even investors in more rural communities stand to get something out of this deal, considering the large amount of money being devoted to projects like broadband for all and bridge and road improvements in areas that may only have one bridge that everyone depends upon.

Your investment properties may soon experience some temporary upheaval as infrastructure improvements start rolling out. Still, in the longer term (after all, real estate is a long game), shiny new roads, faster internet, and early warning systems all go a long way to improving life in communities, both urban and rural. And people want to be where their lives are getting better.