Please ensure Javascript is enabled for purposes of website accessibility
Log In Help Join The Motley Fool
Free Article Join Over 1 Million Premium Members And Get More In-Depth Stock Guidance and Research
By Matthew Frankel, CFP® - Jul 16, 2016 at 7:03AM

Here's what you need to know about the financial condition of Medicare.

With the continuing retirement of the massive baby boomer generation, Medicare is projected to start running a deficit within the next few years. While it's no big secret that Medicare and Social Security aren't financially sustainable, the recently released 2016 Medicare Trustees' Report tells us that the situation has gotten worse.

The financial state of Medicare

First, the bad news. According to the 2016 Medicare Trustees' report, the Medicare Hospital Insurance (HI) trust fund -- also known as Part A -- is projected to be depleted by 2028. This is two full years earlier than last year's report predicted, so the Medicare funding situation just got a little more serious.

The revisions can be attributed to lower CPI assumptions over the next few years, and a closer look at last year's projections reveals that only small balances were expected in 2029 and 2030, so this really isn't as big of a financial revision as it may sound. Even so, running out of money two years early is a significant change to the forecast.

However, the news isn't all bad. Medicare Hospital Insurance is actually expected to run a slight surplus from 2016 through 2020 before returning to a deficit.

Furthermore, once the trust fund is out of money, Medicare benefits won't just stop. In fact, once the HI trust fund runs out of money in 2028, the incoming payroll taxes will still be able to cover 87% of the program's costs. So, as a worst-case scenario, benefits will need to be cut by 13% at that point.

It's also worth mentioning that the other Medicare trust fund, Supplementary Medical Insurance, which covers Medicare Parts B and D, is projected to remain adequately financed for the foreseeable future. These programs receive funding from general revenues as well as beneficiary premiums to meet their financial burdens, so by definition the trust fund holding its reserves is in no danger of being depleted.

What's the reason for the projected deficits?

In a nutshell, there are fewer people paying into the system than in previous years, and this is expected to become an even bigger problem over time. Historically, about four workers were paying into Medicare for every hospital insurance beneficiary. As of 2015, this figure had dropped to 3.1 workers per beneficiary. 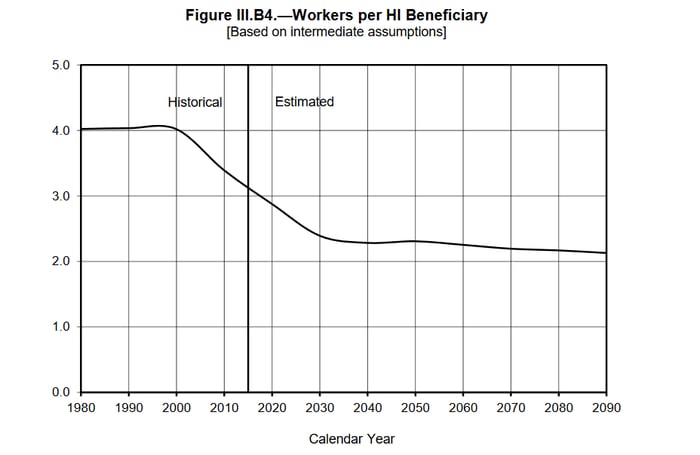 By 2030, however, only 2.4 people are expected to be paying into Medicare for every beneficiary, and this is expected to fall to 2.1 by 2090, the last year in the report's projections. In other words, there will only be about half as many people paying into the system as there have been in the past -- no wonder there isn't going to be enough money.

Fortunately, even with the revised projections, we have more than a decade until Medicare runs into serious financial trouble and cannot cover its promised benefits. And, there are several changes that could be made between now and then in order to close the funding gap.

The most obvious answer to the problem is a tax increase. Currently, the Medicare portion of the payroll tax is 1.45% for both employers and employees, imposed on all earned income. It's entirely possible that a tax increase could happen -- after all, Medicare taxes have already been increased on high earners and on certain investment income, and an across-the-board Medicare tax increase hasn't happened since 1986. In fact, these two taxes are a big reason Medicare is expected to run a surplus for the next few years.

Aside from a tax increase, there are some modifications that could be made to the Medicare program itself that could prolong its solvency. For example, we could restructure benefits and cost-sharing arrangements, increase the eligibility age beyond 65, or allow the government to negotiate drug prices.

A Kaiser Family Foundation survey found that 77% of Americans consider Medicare "very important" and feel that it needs to be preserved, so it's likely that something will be done to address the problem within the next several years. The bottom line is that some changes definitely need to be made before you can feel 100% confident that you'll have full Medicare benefits after 2028, but there's no real reason to panic just yet.