Food waste probably isn't something we think about too often, especially for those of us who don't struggle to afford groceries. But despite the fact that over 42 million Americans live in food-insecure households, collectively, we manage to throw out an estimated 80 billion pounds of food every year. 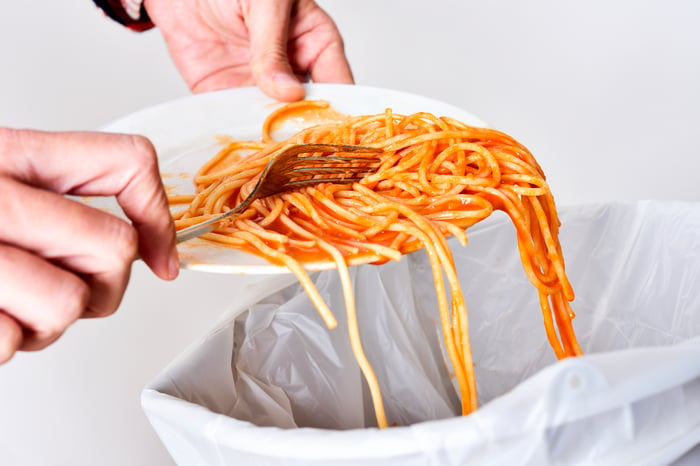 So just how much food does the average American waste? According to a survey by the American Chemistry Council, the average household throws out $640 of food each year. Furthermore, 76% of Americans admit to throwing out leftovers on a monthly basis. Since data from the Bureau of Labor Statistics tells us that the average American household spent $4,015 on food in 2015, this means we're throwing away almost 16% of the food we buy -- and that's not a number to be proud of.

Why are we wasting so much food?

So what's up with this bad habit? Researchers from The Ohio State University conducted a survey to arrive at an answer, and here's what they found:

Now let's talk about expiration dates for a minute. We're often taught or warned not to mess with them for fear of getting sick, but for many of us, the decision to toss expired products often boils down to labeling. Since there's no universal standard for labeling products, reconciling the various terminology out there can be next to impossible. After all, what's the real difference between the "sell by" date and the "use by" date? And then there's the "best before" date, which is even more ambiguous. Will eating a product after the "best before" date simply result in a less satisfying dining experience? Or will it put consumers at risk for food poisoning? It's hard to know, and so many of us err on the side of caution, wasting millions of dollars of food in the process.

What food waste could be costing you

While $640 a year may not seem like such an egregious number in the grand scheme of what many of us spend, imagine what $640 a year could do for your retirement savings. If you were to contribute that amount to a 401(k) or IRA each year, invest it, and generate an average annual 8% return (which is actually just below the stock market's average), after 30 years, you'd have over $72,000 to add to your nest egg. Now that's a good reason to rethink the way we buy -- and waste -- food.

It's time to make changes

Want to break the cycle and save yourself a good $640 a year? Then consider changing the way you shop for and consume food.

First, the obvious: Buy less. Many people are quick to assume that buying in bulk is always the most cost-efficient way to go, but supersizing your purchases might cause you to toss out more than you'd think. In fact, in the above-referenced survey, 53% of respondents say they waste more food when they buy in bulk. Unless you're absolutely certain you'll go through your entire haul before it expires, avoid buying food at warehouse clubs and wait for your local supermarket to run its sales.

Speaking of sales, don't buy food you don't need just because it's being offered at a discount. If you see ranch dressing marked down from $2.99 to $1.99 but you eat it once a year at best, you're not getting a deal. Rather, you're throwing out $1.99.

You should also take regular inventory in your fridge and pantry so you know what you have and what you're missing. That, and plan your weekly menus in advance so you're more organized while shopping.

Additionally, it probably wouldn't hurt to be a little less picky about expiration dates. If a perishable product is well-expired, or if it looks or smells funky, then by all means, trash it. But if you have products that are only a few days past their respective expiration dates, give them a whiff before tossing them out. Also, remember that freezing products can prolong their life, so if you find that you've overbought, try preserving some of your stash for later on.

Finally, learn to embrace leftovers in all of their budget-friendly glory. You have your entire life to go out and sample different cuisines, so if there's perfectly good day-old pot roast sitting in your fridge, there's no reason not to call it dinner.