But there were two key tenets of financial planning for retirement that were put to the test in 2016. Long-term, not too much has changed, but there are valuable lessons in each instance.

For long time, financial advisors would advise a stock-to-bonds mix based on your age. Typically, the rule of thumb was that whatever your age was, that's the percentage of your portfolio that should be in bonds, with the rest in stocks. So a 40 year old would have 40% in bonds and 60% in stocks. That helped allow for greater returns via stocks for young investors, while sticking with less volatile returns as you get closer/into retirement.

With rising life expectancies, however, some have changed the equation. Instead, some planners are saying that you should subtract your age from 115. Whatever the result is, that's how much of your portfolio should be in bonds, while the rest is in stocks. So our 40-year-old would now be 75% in stocks, and 25% in bonds.

The bottom line, however, is that since the Great Recession, the returns on typically "safe" investments has plummeted. 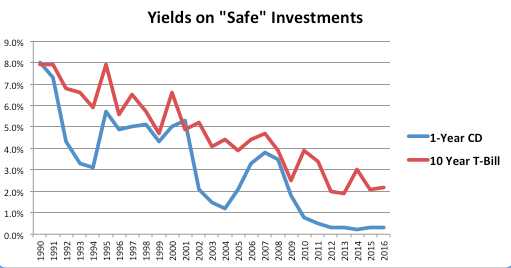 Still, the yields offered today aren't really enough to keep pace with inflation, and that means that if retirees want to be proactive, they need to keep more of their money in stocks. That's another reason that changing the equation to determine the right stocks-to-bonds ratio could be a savvy move on your part.

Selling on anticipation of turmoil

I have a family friend that decided this summer to sell his entire retirement portfolio and put it into cash. After the Brexit vote became final, he figured, there would simply be too much turmoil in the markets, and he saw them tanking in short order. He's not alone: The night after the U.S. presidential election, I had friends texting me saying that they were getting out of the market and were scared, as Dow futures were down almost 800 points.

It turned out to be a lot of worry about nothing. While the S&P 500 dipped 5.4% immediately following July's Brexit vote, the market is up over 3% since before the vote even occurred. And Trump's win? What was viewed as an overnight disaster for the markets turned into a record-breaking day for the Dow, as it hit an all-time high less than 24 hours later -- and has continued setting records.

The takeaway is clear: Don't let your emotions get the best of you. Remember that over the long run, the things that seem like life-or-death today will be funny stories to joke about in a few years. What really matters is being comfortable with how you're invested, putting in place a set-it-and-forget-it model that allows you to focus on the things that really matter in your daily life.

If 2016 taught us anything, taking such an approach is not only good for your nest egg, but for your emotional well-being as well.