Many of us face a fair amount of stress come tax season. Whether it's forgetting a major deduction or filing an inaccurate return and increasing your risk of an audit, the last thing you want to do is make a major tax-related error. But there's one tax mistake that millions of Americans make repeatedly, and it's a big one: They overpay throughout the year. 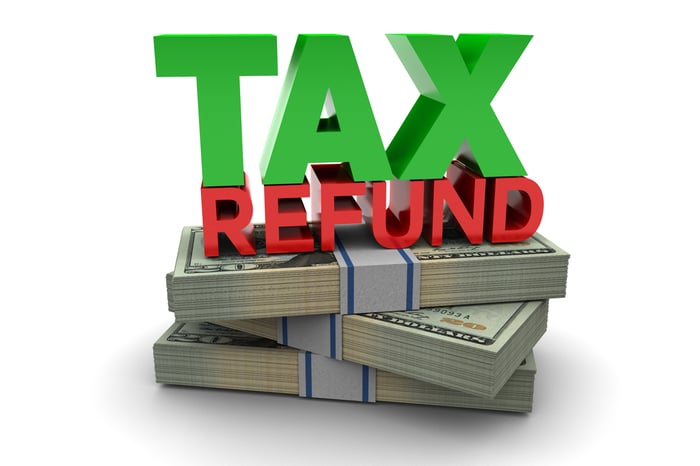 It's estimated that almost 80% of U.S. taxpayers get a refund each year, and while part of that trend can be attributed to credits and deductions, a lot of it stems from simply paying too much in taxes up front. While the idea of getting a refund may not seem like such a mistake, it's a move that could actually set you back big time.

How much money are you willing to part with?

A lot of people who get refunds look at that cash and think: "Awesome, I got just my hands on some sweet IRS money." But in reality, it's not free money, or found money, that you're getting in your refund -- it's your money. All your refund symbolizes is money you could've had up front, and the higher your refund, the more opportunities you lost along the way.

The average American gets a $3,120 refund, which is a lot of money to pass up month after month no matter how much you make. But what's more problematic is that those who earn the least -- and need that money the most -- are also the most likely to get a refund. According to IRS data from 2012, 84% of tax filers earning less than $25,000 a year received a refund, compared to just 34% of those earning more than $200,000.

Worse yet, the average refund that year among lower earners was $2,086, which means those who were already the most likely to be living paycheck to paycheck missed out on roughly $175 a month up front. And for many Americans, having an extra $175 on hand at any point in time could spell the difference between taking on debt or paying the bills.

Imagine you're living paycheck to paycheck, you don't have any savings (which almost half of Americans don't), and you come up $250 short one month. If you wind up charging $250 in expenses on a credit card and don't pay it back for a full year until you get your refund, you'll lose $25 to interest if your card charges 18% (which isn't even excessive -- many cards charge more). Now $25 may not seem like a ton of money, but for someone living paycheck to paycheck, it's a shame to throw even that much away.

The less cash you have on hand throughout the year, the more likely you are to take on debt or pay your bills late, which could damage your credit score and make it more expensive for you to borrow in the future. So if you find that you're getting a tax refund year after year, it's time to put an end to that pattern.

One of the easiest ways to avoid overpaying your taxes is to adjust your withholdings on your W-4. You can generally do this with your employer at any time, but you should especially look to make changes whenever you experience a major life event, whether it's getting married, having a baby, or buying a home. In fact, the IRS has a handy withholding calculator you can use to get your W-4 more on target.

Now if you're worried that adjusting your withholdings will cause you to owe money come tax season, there's a fix for that, too. Once you begin getting more money in your paychecks, take that extra amount and stick it in a separate interest-bearing savings account. If a true emergency arises and you need to tap into that money, so be it. Otherwise, let it sit and earn whatever interest it can, even if it's just a few dollars a year. (Remember, better for you to earn that interest than the government.) Then, if it turns out that you do owe some money when you file your taxes, you can withdraw what you owe from your account but retain your interest as earnings.

While it may seem like a nice thing to get a tax refund, all you're really doing is getting the money you've earned many months behind schedule. You're far better off pocketing that cash along the way and using it responsibly.