Nationwide, the average American under age 65 is earning $46,409 per year, according to the Census Bureau's Current Population Survey. However, average income varies significantly by age, and a more useful comparison for determining your financial preparedness may be your contribution rate to savings accounts. Are you on track for financial security?

Read on to learn Americans' average income by age, and how much average Americans are saving for their golden years. 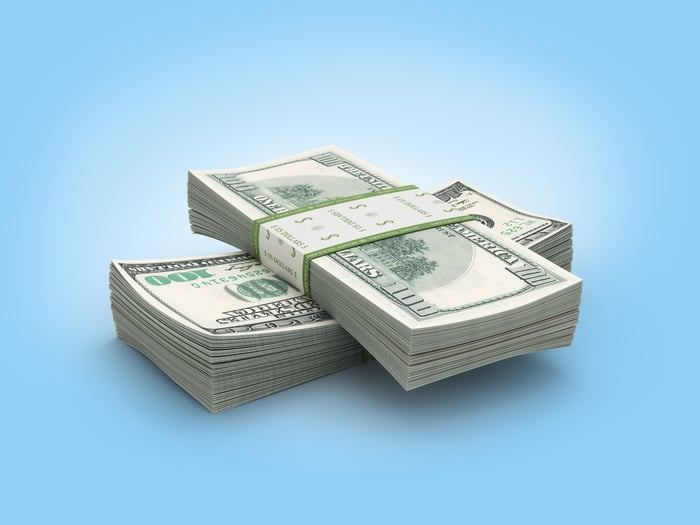 Because averages can be deceiving, it's useful to consider average (mean) income and median income. As a quick refresher, the median is the exact midpoint of a range of data, so there's an equal likelihood of falling above it or below it.

As the following chart illustrates, our mean and median incomes start off low, build steadily into our 40s, and then begin declining up to and throughout our retirement: If your income is above these figures, don't pat yourself on the back too quickly, because while the amount you earn has a big influence on retirement preparedness, an equally important figure is the percentage of income that you're saving. After all, a high income that's hardly saved at all won't guarantee financial security in the future.

Therefore, it's most useful to focus on -- rather than how your income stacks up -- the percentage of your income you're saving compared to your peers.

According to Transamerica, the average American worker is contributing 8% of income to employer-sponsored retirement plans annually. Baby boomers are socking away 10% per year, while Generation X and millennials are saving 7% of their income per year.

Typically, it's recommended that individuals withdraw no more than 4% of their savings annually in retirement, so those nest eggs aren't likely to kick off much in the way of retirement income. As a result, millions of Americans will rely heavily on Social Security.

Currently, one quarter of married retired couples and 43% of singles count on Social Security for 90% or more of their annual income.

Since the average Social Security check is expected to be only $1,360 per month in 2017, that's a worrisome statistic. Even more concerning, however, is the fact that more money is being paid out in Social Security benefits than is being collected in payroll taxes. Because that's forcing the Social Security Administration to draw down its trust fund, recipients could face steep cuts to their benefits as early as 2034, says Social Security's board of trustees.

Boosting income can obviously have a substantial benefit on your retirement savings. However, you can still make up ground by maxing out your contribution rate to your retirement plan, if a raise or job change isn't in the cards.

If your contribution rate is below average, then create a plan now to increase it. Even if your budget is too tight to increase your rate to double digits immediately, increasing it by 1% annually could get you on pace for success, without forcing you to make major changes to your lifestyle.