Please ensure Javascript is enabled for purposes of website accessibility
Free Article Join Over 1 Million Premium Members And Get More In-Depth Stock Guidance and Research
By Maurie Backman - Jan 22, 2017 at 9:18AM

Here's how much cash Americans have been keeping on hand in a checking account. How do you compare?

We all know we're supposed to save a portion of our earnings for emergencies or the future, and unfortunately, many of us are falling short in that regard. It's estimated that 69% of Americans have less than $1,000 in a savings account, while one in three workers has yet to even start saving money for retirement. 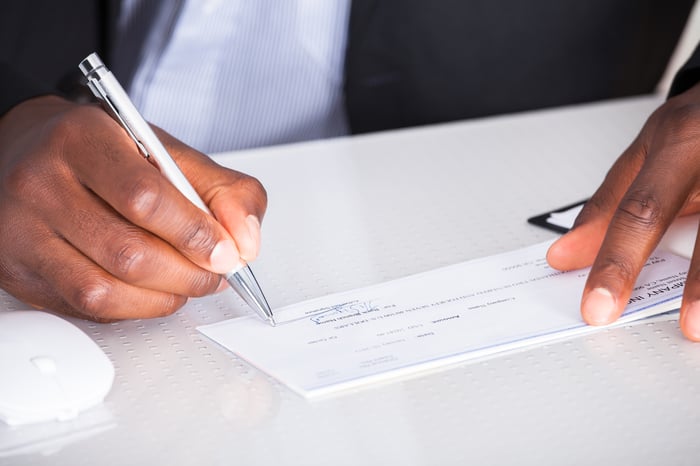 But perhaps our lackluster savings aren't an indication that we're spending too much of our earnings, but rather, that we're putting our money in the wrong place. According to a Federal Reserve study, as of 2013 (the last year for which data is available), the average American family had a checking account balance of $9,132. Not only that, but balances across the board have grown over time. And while having extra money on hand is a good thing in theory, it's a bad move in practice.

Here's what we've been keeping in checking accounts

Americans' checking account balances have largely been growing since 2001. Back then, the average checking account had $6,404. By 2013, that number climbed to $9,132. If these numbers seem high, we can assume that it's partly because the wealthy are bringing up the average. But there's more to it than that.

The following chart summarizes our collective checking habits over a 12-year span: 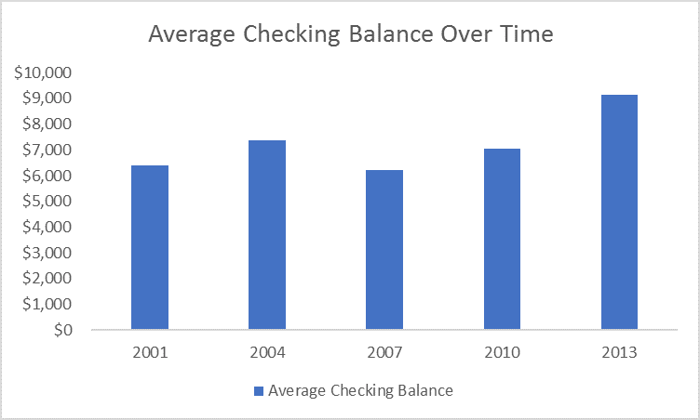 Why the trend? During periods of economic prosperity, many of us are more apt to keep our money invested. When the economy slumps, we tend to pull our money out of the market and keep it someplace safe, like the bank.

But then things picked up a bit. Unemployment rates dropped by mid-2005, and the Dow climbed from 7,674 in March 2003 to 10,508 by April of that year. And consumers followed suit, letting their checking account balances gradually drop between 2004 and 2007.

Of course, that sense of economic security was only temporary. Once the 2009 economic recession hit, many of us fell back into our former ways, keeping our hard-earned cash close by. And because the recovery from that bout was gradual at best, it's no wonder the average American still had over $9,000 in a checking account four years later. But while there may be some logic behind the decision to overfund a checking account, it's a move that could prove costly in the long run.

So how much money should you keep in a checking account? As long as you have a savings account with enough money to cover three to six months of living expenses, you really don't need much more than what it takes to pay your bills for the upcoming month.

Although some checking accounts do pay interest, most don't. And although today's savings account rates are nothing to write home about, it's better to earn 1% on your money than nothing at all. If you open a checking and savings account at the same bank, you can generally transfer money between the two instantly and automatically -- so if your savings account has enough money to cover three to six months of living expenses, you should be set. In addition, you should make sure your checking account balance is high enough to prevent your bank from charging a fee, but if you have enough cash to pay for three to six months of bills, you should be more than adequately covered.

Furthermore, as long as you have enough money in savings for emergencies, and enough money in checking to cover your near-term expenses, you should invest your excess cash, rather than let it sit in the bank. Even a relatively conservative investment portfolio can deliver an easy 5% return, which is much higher than what you'll see with a savings or interest-paying checking account.

The effects of checking account overdependency can add up over time. Imagine you house $9,000 in a checking account year over year, $5,000 of which you generally don't touch to pay your bills. If you were to invest that excess $5,000 for 20 years at a 5% return, it would grow to more than $13,000. Better yet, if you were to invest that money in stocks at an average annual return of 8%, you'd have $23,000 two decades later.

It's true that a checking account is a zero-risk prospect; the only way for you to lose money is to withdraw it yourself. But despite the fact that the stock market has experienced too many periods of volatility to count, if you're willing to ride out those ups and downs, you'll likely grow your money, rather than letting it rot away interest-free. Between 1965 and 2015, the S&P 500 underwent 27 corrections of 10% or more, but it ultimately recovered from every one. Difficult as it may be to relinquish some control over your finances, if you're willing to be patient and put a little faith in history, you stand a strong chance of coming out much richer in the long run.