As the so-called entitled generation, millennials tend to get their fair share of flak. But considering that they've weathered two recessions, among other challenges, it's time that we celebrate some of the things today's millennials are actually doing right. According to TD Ameritrade's 2016 Millennials and Money Survey, millennials have a fairly strong grasp on their finances. Here are some especially encouraging trends coming out of this often-misunderstood generation. 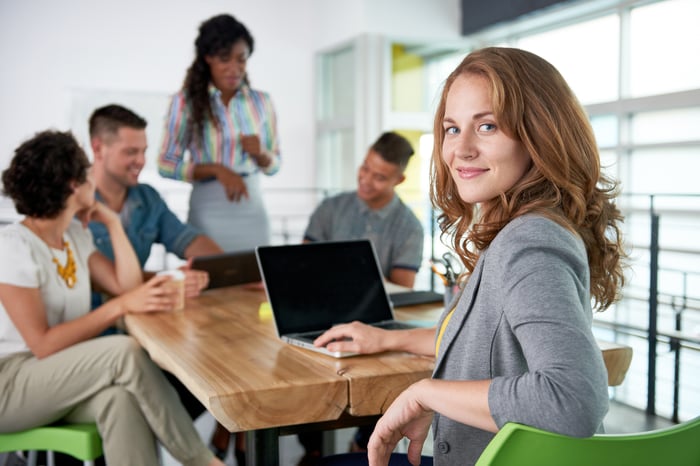 According to a recent U.S. Bank study, only 41% of Americans maintain a household budget. Twice as many millennials, meanwhile, understand the importance of tracking their finances this way. Without a budget, you're bound to have a much harder time understanding where your money goes and identifying opportunities to save. If you're not sure how to create a budget, you can follow these tips to get started.

2. More than half of millennials have an emergency fund

A recent GoBankingRates study revealed that 34% of Americans have no savings whatsoever. But without savings, you risk taking on debt, or losing your car or home, if you find yourself in a situation where you can't work yet have bills to pay. Most people need three to six months' worth of living expenses in an accessible bank account at all times. If you have variable income or a large number of dependents, you really can't go wrong aiming for nine to 12 months of expenses. Thankfully, millennials seem to recognize the importance of having an emergency fund, as 51% have money set aside for the unexpected.

3. A good 72% of millennials are saving for retirement

It's estimated that one out of every three Americans has no retirement savings at all. But millennials seem to be bucking that trend. Almost three-quarters of millennials are already saving for the future, and as such, they have a great opportunity to really grow their nest eggs.

Perhaps part of what's motivating millennials to take savings matters into their own hands is the ever-present worry that Social Security won't be available in its present form once they're ready to retire. The program's trust funds are expected to run dry by 2034, and when that happens, recipients might lose as much as 25% of their scheduled benefits. Throw in the fact that Social Security was never meant to be retirees' sole source of income in the first place, and it's a good thing millennials are being smart about saving.

If you're among the minority of millennials who have yet to open an IRA or 401(k), now's the time to take action. Both types of plan offer pretty generous annual contribution limits -- $5,500 and $18,000, respectively -- coupled with up-front tax breaks (unless you open a Roth IRA, contributions are made with pre-tax dollars). While many millennials (and older workers, for that matter) can't necessarily max out on these limits, setting aside even a few thousand dollars a year can go a long way thanks to the beauty of compounding. Case in point: Saving $200 a month for 40 years will leave you with a $622,000 nest egg if your investments generate an average annual 8% return.

4. Two-thirds of millennials are saving to buy a home

Though homeownership is an expensive prospect, millennials seem to recognize the benefits of buying versus renting. And the fact that so many are saving for down payments means many will get to avoid private mortgage insurance and the added expense that goes with it.

If you're among those socking away money in the hopes of buying a home, just be careful not to take on too high a mortgage. Ideally, your housing costs (which include property taxes and homeowners' insurance) should never exceed 30% of your monthly paychecks. Stay below that limit, and you'll be in a strong position to keep saving for other important goals even once you take on the responsibility of homeownership.

While millennials are doing a good job of getting their priorities straight, they're continuing to miss out on a few key opportunities. For one thing, millennials are part of the 60% of Americans who invest too conservatively for retirement. To illustrate the problem with playing it too safe, in our above example, we saw that saving $200 a month for 40 years gave us $622,000 with an average yearly 8% return, which you'll typically earn from the stock market. But if you stick to safer investments and yield just a 4% return overall, that $200 a month will only grow into $228,000, which represents a sizable difference.

Millennials also tend to be heavily influenced by social media. As such, 24% say they feel pressured to match their friends' spending habits, while 15% admit to spending money to make a good impression on others. Keeping up with the digital Joneses can really wreck your finances if you're not careful, causing you to take on debt or neglect savings. You're far better off ignoring thy neighbor and focusing on what's most important to you.

Despite these pitfalls, it looks like a large number of millennials are setting the stage for a lifetime of success. And the rest of us, no matter how old we are, ought to consider following suit.