Getting married doesn't just represent an emotional milestone, but a financial one as well. But while some couples get to enjoy certain tax benefits by virtue of getting married, others wind up with a higher income tax bill after tying the knot. Whether you'll pay less tax as a married couple versus two individual single filers will depend on your income level and other deductions you might be eligible for. 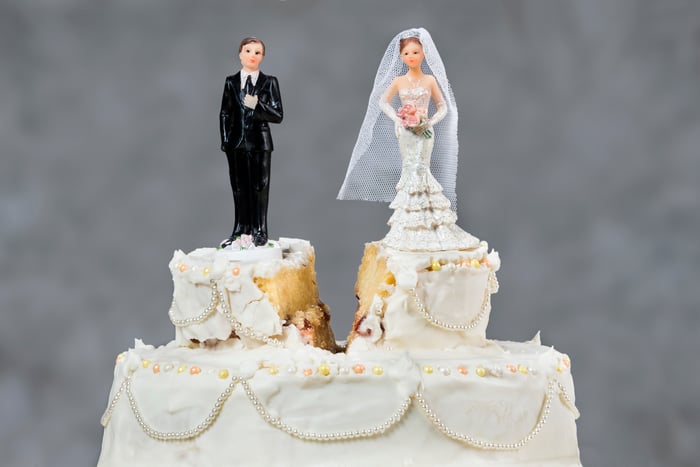 How will marriage impact your taxes?

Once you get married, you have the option to change your tax status to married filing jointly, and that can be a good thing or a bad thing depending on how your financial situation shakes out. If you're lucky, you'll get to capitalize on what's known as the marriage bonus. The marriage bonus applies to couples where one person earns a lot more money than the other. In these situations, both spouses' combined earnings will usually push them into a lower tax bracket so that less of their income gets taxed at the higher earner's previous top rate.

Of course, to really understand how marriage will affect your taxes, you'll need to know what tax rate you're subject to. Here's what the current breakdown looks like:

Now you should note that President Trump is proposing a scaled-down system with fewer tax brackets which would change some of these numbers. But for now, let's work with what we have.

Imagine you earn $35,000 a year and your spouse earns $100,000 a year. As single filers, you'd fall into the 15% tax bracket, while your spouse would fall into the 28% bracket. However, as a couple filing jointly, your combined income would put you in the 25% bracket, which means your highest dollars of earnings would be taxed at a lower rate than what your higher-earning spouse was previously subject to.

But watch what happens when you're dealing with two strong earners with similar incomes. If you earn $110,000 a year and your husband earns $125,000 a year, you'd each fall into the 28% bracket as single filers. But with a combined income of $235,000, you're right over that threshold to fall into the next highest tax bracket of 33%.

Now keep in mind that once you're married, you don't have to file a tax return jointly. But doing so typically works best financially, even if your taxes do go up as a result of getting married.

If getting married propels you and your spouse into a higher tax bracket, there are a few things you can do to ease the pain. You can start by maxing out your retirement plan contributions, which, unless you're dealing with a Roth account, will lower the amount of your income subject to taxation in the first place. Currently, workers under 50 can contribute up to $5,500 a year to an IRA and $18,000 to a 401(k). If you're over 50, these limits increase to $6,500 and $24,000, respectively. If you and your spouse each max out your 401(k) contribution, you'll knock $36,000 off your taxable income, which could push you back down a bracket.

Along these lines, be sure to take advantage of other deductions that can exempt more of your income from taxes. While owning a home instead of renting comes at the cost of a down payment, it also opens the door to the mortgage interest deduction, among many others. Similarly, donating to charity can serve as a legitimate tax write-off. Finally, if you have investments that haven't been performing well, selling them at a loss can actually work out in your favor tax-wise. Assuming you don't have capital gains for the year, you can use up to $3,000 in investment losses to offset your regular income.

While some couples are fortunate enough to see their taxes go down once they're married, others have the complete opposite experience. It's a good idea to examine the tax impact of your marriage and come up with a strategy to address it.