We all know that kids are expensive. But it looks like some would-be parents are overestimating the amount it costs to raise a child through his or her first year of life. Bankrate conducted a national poll asking participants how much they thought it would cost to raise a baby for a year, and the average estimate came in at $24,131. However, a study by the U.S. Department of Agriculture points to a much lower figure -- $12,680 -- for an infant's first year of life. 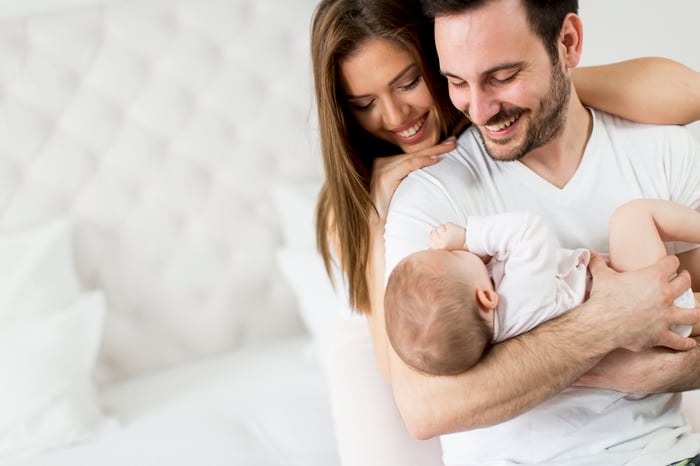 Of course, $12,680 is hardly a number to sneeze at. But given that the USDA's number accounts for everything from housing to medical expenses to child care to entertainment, it's far less intimidating than the alternative.

That said, the amount of money it ultimately costs you to raise your baby will depend on a number of factors, from where you live to what health issues, if any, your child is born with. But no matter what your personal expenses end up being, there are ways to prepare for the costs that lie ahead and ease the financial burden of parenthood.

Save ahead of time

The average American family pays $10,192 a year for a full-time day care center or $28,900 for a full-time nanny. In fact, child care might be the single largest new expense you face after bringing a baby into the picture -- unless, of course, you opt not to go back to work and forgo your former salary entirely. Throw in the fact that parents who have insurance spend an average of $1,297 on medical costs during a child's first year of life, and it's no wonder so many people postpone family building until they're in a more secure place financially.

If you're thinking of having a baby, it's critical to be prepared, and that means saving, saving, and saving some more. For most people, three to six months' worth of living expenses is considered an adequate emergency fund, but soon-to-be parents should, at the very least, aim for the top end of that range. That's because having a baby opens the doors to a host of expenses, from clothing to furniture to more diapers than you probably want to count.

If your emergency fund is lacking, you'd be wise to pump it up before introducing another dependent into the mix. And if you're among the 66 million Americans with no emergency savings whatsoever, let this be a wake-up call: You need to start saving now. Otherwise, you could wind up in serious financial trouble once the baby bills start coming in.

If you're already sweating the costs of raising a baby, here's some good news: The IRS offers a number of tax breaks for parents. First, there's the Child Tax Credit, which gives you $1,000 per child under the age of 17. As long as you earn less than $75,000 as a single tax filer or $110,000 as a married couple filing jointly, you'll get to claim this credit in full. Now, because this credit is nonrefundable, the most it can do is knock your tax liability down to $0, but a related credit called the Additional Child Tax Credit may give you a refund if you're eligible and don't wind up owing any taxes.

There's also the Child and Dependent Care Credit, which is designed to assist parents who pay for child care so they can work (or look for work). Depending on your income level, you can claim up to 35% of the cost of qualifying child-care expenses up to a maximum of $3,000 for a single child under 13, or $6,000 for two or more children under 13. Though this credit is also nonrefundable, you can snag an additional tax break if you sign up for a dependent care FSA, which lets you put up to $5,000 in pre-tax money aside per year to pay for child care so that you and your spouse can work (or look for work).

Finally, there's the Earned Income Tax Credit (EITC), which, depending on your earnings and the number of qualifying children in your household, can put up to $6,318 back in your pocket. The EITC is especially valuable because it's one of the few tax credits that's actually refundable, so if it knocks your tax liability down to $0, you'll get a check for the leftover credit amount.

There's no denying that children are expensive. But whether your costs come in higher than average or well below, the more you save and prepare in advance, the better equipped you'll be to handle whatever financial challenges might come your way.