Seniors usually aren't generally thought of as big-time borrowers, but according to the Employee Benefit Research Institute, older Americans aged 55 to 64 carried the highest levels of overall household debt as of 2010. Not surprisingly, many of those same people end up carrying that debt with them into retirement, and that's where things get even more dicey. 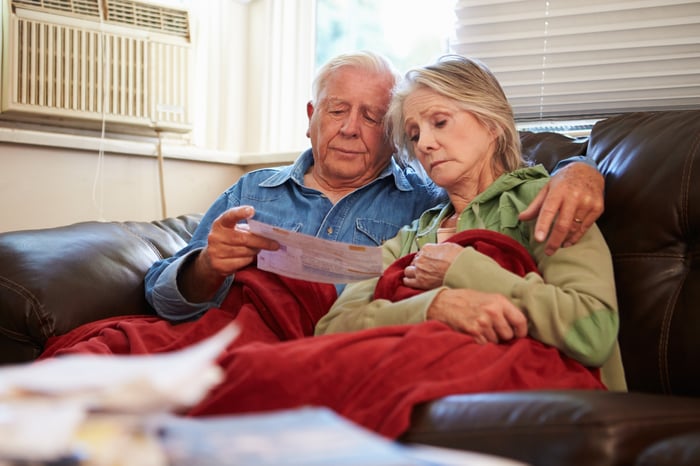 Because seniors on a fixed income tend to have little wiggle room in their budgets, there are many who never manage to wipe out those debts in their lifetime. In fact, back in May 2016, I reported that 20% of Americans expect to die without having paid off their debts in full. But here's some good news about that rather depressing statistic: A new study from CreditCards.com shows that just 12% of consumers with debt think they'll take it with them to the grave.

Of course, the numbers are still far from ideal -- after all, we're talking about 19 million people dying in debt. But it's an improvement over previous numbers.

Where's all that debt coming from?

Seniors aren't immune to debt, and they seem to be racking it up from a variety of sources. While many older Americans aim to enter retirement mortgage-free, things don't always work out that way. According to the Consumer Financial Protection Bureau, the percentage of homeowners 65 and older with mortgages climbed from 22% in 2001 to 30% in 2011. Among homeowners 75 and older, that rate more than doubled from 8.4% to 21.2%. While carrying a mortgage into retirement provides one small benefit -- the mortgage interest deduction -- those who continue to face monthly home loan payments in their senior years often end up struggling.

Finally, there's student debt, which impacts more seniors today than ever before. Back in 1989, retirees carried an average of $400 in student loans, but by 2013, that figure jumped to $2,300. It's estimated that as of 2013, seniors 65 and older had amassed a cumulative $18.2 billion in student loans, with roughly 706,000 retired households continuing to carry some amount of student debt.

Seniors clearly have ample opportunity to accumulate debt, but they stand a stronger chance of paying it off if they work toward that goal before entering retirement. If you don't want to join the ranks of older Americans who inevitably die in debt, you'll need to come up with a plan while you still have a steady paycheck.

Work on your debt while you're still working

Once you move over to a fixed income in retirement, you'll need every penny you can get to pay your living expenses. If you're serious about wiping out your debt, you'll need to take action while you still have a job.

You can start by figuring out which debts are costing you the most money so you know which to tackle first. A credit card charging 18% interest, for example, should take priority over a student loan at 5% interest.

From there, you'll need to work on freeing up extra cash to chip away at that debt. If you don't already have a budget (60% of Americans don't), create one and include a line item for debt payments. You may need to adjust other spending categories downward (like entertainment) to allow for those payments, but you need to factor them in nonetheless.

If cutting spending elsewhere doesn't free up enough money to make a sizable dent in what you owe, your next best move is to look into a side job to generate extra cash. Is working a second gig ideal? Probably not. But you'll have more energy for it in your late 50s or early 60s than you will when you're older.

Along these lines, you might consider postponing retirement for a year or two if doing so will allow you to enter that phase of life debt-free. Working part-time in retirement to pay off your debts is also an option, but be careful -- you may come to find that you need the extra income to cover your living costs alone, in which case you'll be stuck with that pile of debt hanging over your head.

If you really don't want to die in debt, you'll need to work on paying off that balance at a time in your life when you have regular income coming in. And the sooner you get started, the greater your chances of avoiding that unwelcome fate.