Many Americans eagerly await the day they can hand in their permanent resignation and kiss the workforce goodbye. But for a large number of workers, that dream may never come to be. According to human resources consulting firm Willis Towers Watson, 25% of Americans don't expect to retire before age 70. And while that's not necessarily great news, here's an even more depressing tidbit to process: A 2016 TD Ameritrade survey found that one out of every four Americans expects to never retire at all. But despite the overabundance of discouraging statistics out there, I'm here to tell you that you can retire on time. You just need to be willing to set goals, work toward them immediately, and make some modest sacrifices along the way. 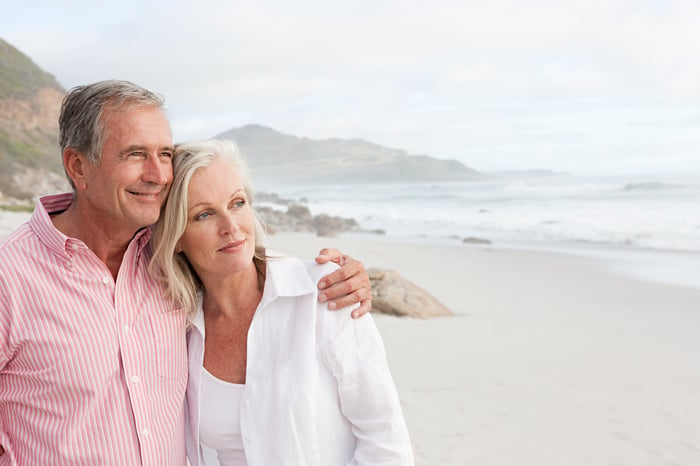 If retiring on time is important to you, you'll need to start setting money aside early on -- ideally, as early as your first paycheck. TD Ameritrade reports that while younger Americans usually start saving for retirement at age 26, the average age for boomers to have started saving is 31. And while five years may not seem like such a substantial gap, you'd be surprised at how much that half-decade of lost opportunity could cost you.

Let's assume you're able to save $300 a month for retirement, and that your investments generate an average annual 8% return (which is actually just below the stock market's historical average). The following table shows how much you stand to accumulate based on when you start:

Notice the difference between kick starting your savings efforts at 26 versus 31. Contributing just $18,000 more over the course of five years ends up increasing your ending balance by well over $300,000 thanks to the power of compounding. If you're willing to start saving early on in your career, you'll have multiple decades to grow your money into an impressive nest egg.

There's a reason stocks tend to offer higher returns than most other investments; there's more risk involved. That said, if you start saving for retirement early enough, you'll have plenty of time to ride out the stock market's ups and downs to come out ahead.

Investors who get burned by the stock market are typically those who aim to get in, make a quick buck, and get out. This approach can be dangerous, which is why I constantly tell people not to invest money they need on hand for the next 10 years. Your emergency savings, for example, should not be invested in the stock market, nor should the down payment you're hoping to put on a house in a couple of years. But if you start saving for retirement in your 20s, 30s, 40s, or even 50s, there's still enough time to ride out those waves -- and if you're willing to get aggressive, you can turn a smaller amount of savings into a nest egg that enables you to retire on time.

The following table shows how much money you stand to accumulate based on varying investment styles and their typical returns:

You can't help but notice the stark difference between a conservative investment strategy and an aggressive one, or even a moderate approach versus one that's more stock-focused. While $300 a month isn't a particularly large investment, over time, it can produce a pretty remarkable total.

Keep your living costs down -- both now and in retirement

If you're serious about retiring on time, one final thing you'll want to do is consistently live below your means, both during your working years and also in retirement. The lower your living expenses, the more money you'll have available to save, and the less you spend in retirement, the further you'll be able to stretch whatever savings you've amassed.

As an example, a large number of Americans spend far more money on housing than they should. Back in 2015, almost 12 million households spent more than 50% of their income on housing, when in reality, housing should never exceed 30% of your take-home pay. If you stick to that 30% threshold or, better yet, stay well below it, you'll have more wiggle room in your budget for savings.

The same concept applies to all areas of your budget. If taking public transportation is cheaper than owning a vehicle, sell your car and take the bus. If you're spending hundreds of dollars each month on restaurants and takeout, which typically charge a 300% markup for food, pledge to start making half of those meals at home, and pocket the difference in cash.

Retiring on time is an attainable goal if you're willing to curb your spending and alter your picture of what your senior years might look like. Perhaps you won't fill your days with exotic travel or spend your nights dining at five-star establishments, but if you can learn to be content with less, you stand a greater chance of retiring at a point in your life when you're young enough to enjoy it.