Generally, when you receive income outside of your usual paycheck, you'll also get a tax form summarizing your earnings. This form is known as a 1099, and it comes in a number of varieties. There's the 1099-MISC, which, as the name implies, is used to report miscellaneous income. There's also the 1099-INT, which reports interest income, the 1099-DIV, which lists dividend income, and the 1099-C, which covers canceled debt, among others.

Any time you receive a 1099, you're required to report that income on your tax return. But what happens if you didn't receive a 1099 form that you were expecting to get? Believe it or not, 1099s go missing more often than you'd think. Sometimes, they get lost in the mail. Other times, they're simply not issued when they should be. 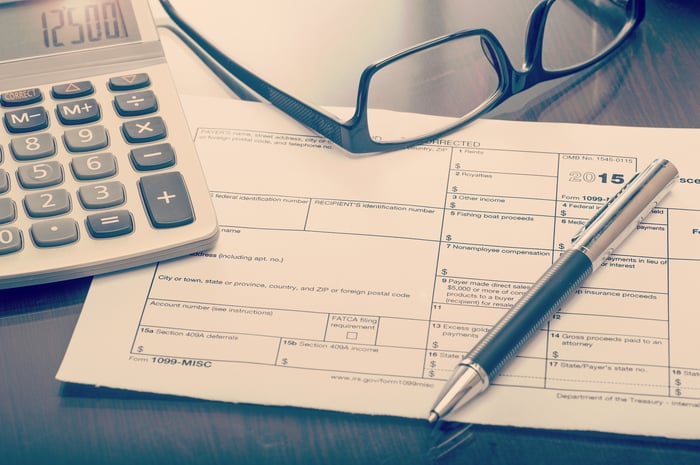 If you're wondering how to get a 1099 you never received, the answer is to reach out to the would-be issuer and request one. But do you need to take this step? Actually, no.

It's a question many taxpayers find themselves asking: Why didn't I get my 1099 form? There are a number of reasons you might be missing a form. Sometimes, companies are late in issuing them, and they do occasionally get lost.

But if you're expecting a 1099 for income from a company you did business with, you should know that you probably won't get a form if your earnings totaled $600 or less. However, you're still required to report that income to the IRS, even in the absence of official documentation.

Missing a 1099 is only a problem if you don't have your own records, and therefore don't know how much income to report. Unlike a W-2, which you're required to include with your taxes, 1099 forms don't get filed along with your return. So as long as you know what amount to report, there's no issue with not having the actual form.

That said, even if you think you have perfect records, you may want to reach out to the issuer to follow up on a missing form. The reason? Companies and entities are required to file 1099s with the IRS. If your copy somehow goes missing but the IRS gets its copy, and the amount listed on that form doesn't match your records, your return could get flagged for an audit.

Now keep in mind that mismatched information is only a problem if you list an amount that's lower than what your missing 1099 says. The IRS won't mind if you report income in a higher amount and pay taxes on it accordingly.

Of course, some people will tell you that, if you're missing a 1099 and know what to report, you should leave it alone rather than risk having a payor issue a potentially erroneous form. But if you're able to get in touch with the issuer and confirm the amount to be listed on your form, there's no harm in getting an official record.

While filing your taxes without a 1099 in hand generally isn't a problem, there is one exception, and that's the 1099-R, which lists distributions from pensions, annuities, and retirement accounts. You should receive a 1099-R if you collected at least $10 in distributions over the course of the tax year. And if you had income tax taken out of those payments upfront, you'll need to include that 1099-R on your return to show what was withheld. Otherwise, there's no actual need to go through the legwork of following up with your issuer.

While having all of your 1099s can make the tax-filing process easier, you technically don't need those forms to submit your return. So if you're missing a 1099, and the issuer doesn't get back to you with a copy, don't panic. As long as you know what to report, you can complete your return without having that piece of paper to reference.

What If I Didn't Receive a 1099? @themotleyfool #stocks Next Article
Current