Please ensure Javascript is enabled for purposes of website accessibility
Log In Help Join The Motley Fool
Free Article Join Over 1 Million Premium Members And Get More In-Depth Stock Guidance and Research
By Maurie Backman - Mar 6, 2017 at 6:43AM

College may be expensive, but here's some good news: You might recoup your costs sooner than expected.

Student debt is a huge burden for countless college graduates. It's estimated that more than 44 million Americans have outstanding student loans totaling close to $1.3 trillion. Meanwhile, the average Class of 2016 graduate now owes $37,172 for the privilege of having gotten a degree, up 6% from the previous year.

Despite these daunting figures, there's actually some good news on the student loan front: According to The College Board, it takes an average of just 12 years to recoup the cost of getting a bachelor's degree. This means that although many younger Americans will inevitably struggle during that first post-college decade, by roughly age 34, the cost of a degree will have paid for itself. 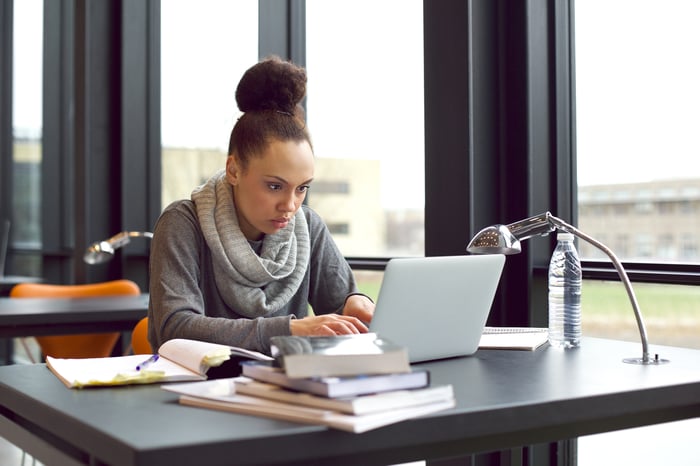 What's a college degree worth?

Though there are always exceptions, there's solid data out there showing that college graduates tend to earn more money than workers without a degree. And we're not talking small amounts. Last year, full-time workers with college diplomas earned a median of 67% more than high school grads last year, and that's not including college grads with advanced degrees. Furthermore, relatively recent college grads were far less likely to fall victim to unemployment. The jobless rate for 25- to 34-year-olds with a bachelor's degree was 2.6% last year, which is more than 5 percentage points below the unemployment rate for workers without a degree.

But to fully appreciate the value of a college degree, it helps to look at some hard salary numbers, and here goes: While the median income for 30- to 34-year-olds with a Bachelor's degree is $40,944, it's just $31,807 for those with a high school diploma alone. Although college is no doubt expensive, at the end of the day, if you borrow wisely, you stand to recoup your costs completely by your mid-30s and enjoy the benefits of a higher income for a solid three decades thereafter.

Of course, this 12-year repayment period doesn't apply to everyone. In fact, it assumes that you'll graduate college in four years, pay 4.3% interest on your debt (the effective interest rate for federal student loans for the 2015-2016 school year), and finish making loan payments in 10 years (the standard repayment period for federal loans).

In reality, graduating in four years is a more difficult prospect than you'd imagine. At most public colleges, only 19% of full-time students manage to graduate in four years' time. And as of 2014, in a survey of 580 institutions nationwide, only 50 said that the majority of their students manage to graduate on time. Furthermore, many students have no choice but to borrow from private lenders, thus subjecting themselves to higher interest rates and lengthier repayment plans.

In other words, just because you can recoup your college costs in 12 years doesn't mean you actually will. But if you take the right attitude and approach to a degree, you'll have a better chance of knocking out your associated debt quickly and reaping the benefits for a longer period of time.

We just learned that last year's college graduates borrowed $37,172 on average, and while that might seem like a lot of money, it's fairly reasonable given what a degree costs today. According to The College Board, here's what tuition and fees averaged for the 2016-2017 school year:

These numbers don't even include room and board, which can tack a solid $10,000 per year onto your bill. But if you're willing to stick to an in-state school and commute rather than live in a dorm, you can shave thousands of dollars off your total cost. Better yet, get the first half of your degree at a community college, where, based on 2016-2017's average numbers, you'll pay just $3,520 per year in tuition.

Another way to keep your borrowing to a minimum is to accelerate your studies by loading up credits while you're already enrolled full-time. Shaving even a single semester off your bill will save you over $4,800, assuming you attend a public four-year school in your home state. Finally, do your best to avoid private loans at all costs, as they tend to charge higher interest over time and don't offer the same protections as federal loans, like income-based repayment plans or hardship deferrals.

While waiting 12 years to recoup your college costs might seem like a long time, in reality, it's not such a bad return on investment. If you play your cards right and break even by your mid-30s, you'll still have the bulk of your career ahead of you, which leaves plenty of time to keep earning money and maximizing that degree to the fullest.