If you're a millennial, you're in a great position to give yourself a fabulous retirement. You have plenty of time to save, which will means compound interest can be a powerful wealth-building tool for you. And if you're like most members of your generation, you've already started putting money aside for retirement: The Transamerica Center for Retirement Studies reports that 72% of millennial workers have already begun saving, with a median starting age of 22. However, knowing how to maximize your returns on said savings can make a huge difference in how far that money will go.

Here are five steps that could go a long way toward making Future You rich.

Most employers who offer a 401(k) plan will match at least some of your contributions. In other words, they'll contribute free money into your retirement account if you make contributions of your own. Different employers offer different levels of matching; check with your HR representative to find out what your own company offers. Typically, employers will match your contributions up to a certain amount -- say, 5% of your salary. Once you find out how much your employer will match, make sure you're contributing at least that much each year. If you don't, you're throwing that free money away. 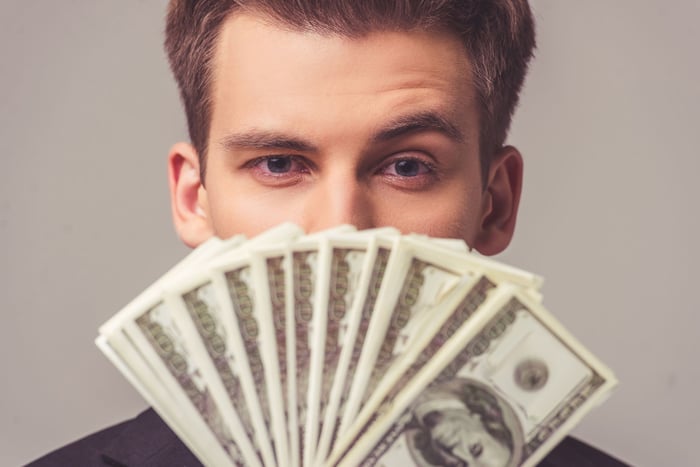 Traditional 401(k)s and IRAs allow you to contribute money tax-free. With a 401(k), the contributions come out of your paycheck before they're taxed, and with an IRA, you get to deduct your contributions, which means you don't have to pay taxes on that amount. However, you do have to pay taxes when you eventually withdraw the money to pay for expenses in retirement.

A Roth account works the other way around: The money you put into the account is taxed, but when you withdraw it, you don't have to pay taxes on it (assuming you meet all the qualifications). That makes a Roth account ideal for those who are just starting their career, because they're probably earning less now (and therefore paying a lower tax rate) then they will be when they withdraw the money. That means they could save a bundle in income taxes.

When it comes to investing, high risk and high returns usually go hand in hand. Riskier, more volatile investments -- those that tend to bounce up and down in value -- will generally earn greater profits over the long haul than investments that slowly but steadily gain in value. If you've wisely begun investing well before you will need the money, you can take advantage of this rule by investing in more volatile assets (typically stocks) and getting a higher return on your money. You won't actually need the money for decades, so it won't matter if your portfolio tanks in value this year; it'll likely rebound in the next. That can lead to some pretty heart-palpitating moments as your investments see-saw up and down, but just grit your teeth and remind yourself that it doesn't matter how much those stocks are worth today; what matters is how much they'll be worth when you approach retirement.

When you're young, there's nothing wrong with living life spontaneously and occasionally flying by the seat of your pants. But maybe make an exception when it comes to saving money. You don't have to micromanage your investments -- just learn the basics of asset allocation and tweak your holdings about once a year so they don't get out of wack. If a mutual fund you own is going gangbusters, then it will take up a bigger and bigger percentage of your portfolio. If that mutual fund later tanks, you don't want it to drag your portfolio down with it, so do some occasional buying and selling to keep your investments in check.

You also need to figure out how much money you'll need to have saved by the time you retire. There are tons of retirement calculators on the internet that can help you determine this number; try using two or three different calculators to get a ballpark figure of how much you'll need, then adjust your savings to make sure you'll reach it. And don't panic: That number may look huge now, but remember that compound interest will end up doing the heavy lifting. Here's a quick example to prove it. Say you invest $6,000 per year for 30 years and earn a respectable (but not exceptional) return of 6%. You'll end up with $503,000, even though you only invested a total of $180,000.

If you're earning a decent wage, saving as much as you can, and investing somewhat aggressively, then you'll be on track to save up hundreds of thousands (or even millions) throughout your career. Just contribute consistently to your retirement accounts and let the market take care of the rest.

5. Have some nonretirement savings, too

Don't make retirement accounts the be-all and end-all of your savings plan. Between now and retirement, you'll hit some rough patches. You'll probably experience medical emergencies, family crises, car breakdowns, job losses, and so on. And you'll need money to get through those emergencies. If all of your money is tied up in retirement savings accounts, you'll be forced to raid those accounts to pay for emergencies -- setting back your retirement plans significantly. Keep your retirement funds secure by setting up a bank savings account or other cash-equivalent account for the day that you really, really need some money.