Tax evasion is a serious crime, and it comes with serious consequences.

We all want to lower our taxes, and thankfully, there are plenty of legal ways to do so. But while there's nothing wrong with capitalizing on legitimate deductions and credits, deliberately attempting to defraud the IRS by hiding income or underpaying your taxes could really get you into trouble. It's a concept known as tax evasion, and while it's a practice often associated with super-wealthy celebrities and corporations, low- and middle-income earners have been known to do it, too.

Tax evasion is the illegal practice of willfully defrauding the IRS by not reporting income or not paying income tax on one's earnings, either in part or in full. Evading taxes is a serious crime, and anyone found guilty could face hefty fines, jail time, or both. That's why it's crucial to understand what constitutes tax evasion and where to draw the line. 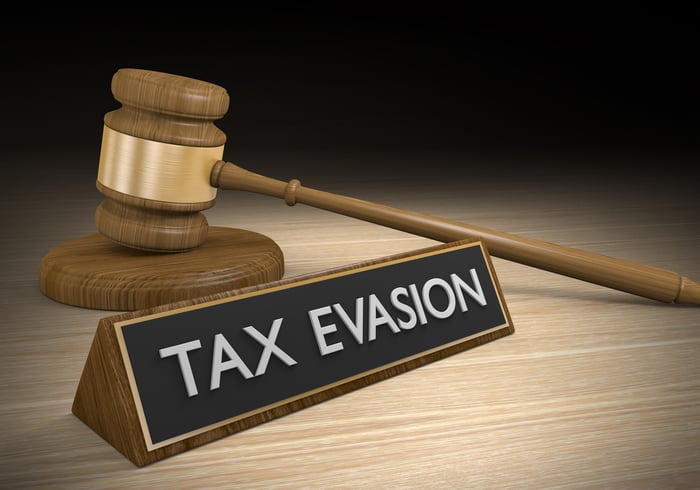 Some people use the terms "tax avoidance" and "tax evasion" interchangeably, but in reality, they're not the same thing at all. Tax avoidance, when done correctly, isn't a crime. Rather, it's the legitimate act of minimizing taxes through legal, IRS-sanctioned methods.

Some common examples of tax avoidance include:

Tax evasion, on the other hand, occurs when illegal measures are used to lower a tax bill. Common examples of tax evasion include:

Say you're self-employed and are paid frequently in cash. If you made $50,000 last year but claim you only earned $30,000 on your tax return, that's tax evasion. Similarly, claiming $10,000 in deductions to lower your taxable income when you're only eligible for $2,000 in deductions constitutes tax fraud as well.

The IRS estimates that 17% of taxpayers fail to comply with the tax code in one way or another when filing their returns, yet only 0.0022% are actually convicted of tax crimes. That's because the IRS can usually tell the difference between illegal activity and an honest mistake.

Because the tax code is extremely complex, it's not uncommon for filers to fall victim to errors. Along these lines, sometimes math mistakes happen to the best of us, and while filing electronic returns can help minimize errors, they can't stop tax filers from transposing numbers or copying down incorrect amounts.

So how does the IRS know whether it's dealing with carelessness versus outright fraud? As a general rule, tax fraud (which includes tax evasion) is defined as a willful attempt to cheat the IRS out of its money. If the IRS doesn't think the intent is deliberate, it typically won't pursue criminal charges.

For example, say your W-2 shows $65,200 of income, and you accidentally input $62,500 on your return and calculate your tax bill accordingly. Because that's a pretty obvious -- and honest -- mistake, the IRS will typically send what's known as a CP2000 letter proposing an adjustment to your taxes. And while you might still face a penalty for underpaying, it shouldn't be an extreme one.

On the other hand, if the IRS audits your return and finds that you've hid thousands of dollars in income, you could face some serious criminal repercussions -- namely, up to five years in prison and up to $250,000 in fines. Yikes.

Tempting as it may be to hide a little income here and there or slightly exaggerate a deduction to lower your tax bill, if you want to avoid problems with the IRS, your best bet is to always keep things legitimate and stick to the truth. Remember, you don't need to conceal millions of dollars in income to be found guilty of tax evasion; all you need to do is engage in activity designed to willfully defraud the IRS.

If you're ever unsure about claiming a deduction or reporting income or expenses, talk to an accountant who understands the tax code better than you do. It's a far better bet than taking chances and running into trouble with the law.