It may be more than you think.

While many people think $1 million is the retirement savings target they should aim for, the truth is that there's no such thing as a magic retirement number. In fact, if you're willing to live a modest lifestyle, you can quite possibly get by with far less and still enjoy a fulfilling retirement. But while you may not need to hit that $1 million threshold to retire in comfort, it's pretty safe to say that you'll need well more than $1,000 to cover your living expenses as a senior. But if a large number of Americans don't ramp up their savings efforts, that's all they'll have at the end of the day.

According to a new report by the Employee Benefit Research Institute (EBRI), almost 25% of current workers have less than $1,000 set aside for retirement. And while many workers have amassed significantly more than that, nearly 50% have less than $25,000 in savings for the future. Considering that most of the people surveyed by the EBRI think they'll need at least $500,000 in total retirement income, it's clear that many Americans are alarmingly far behind. 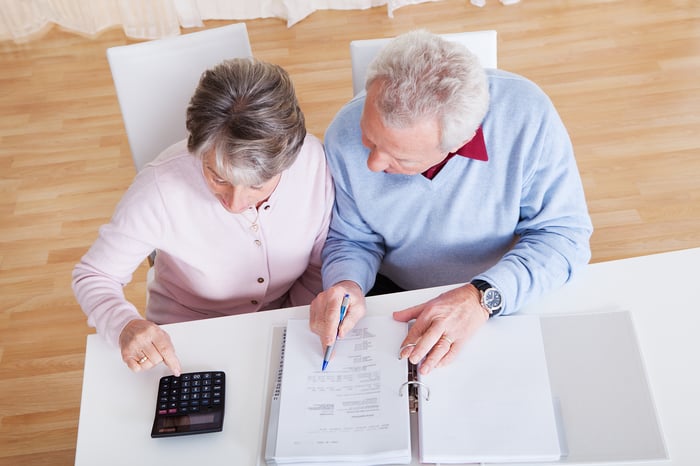 While this glaring lack of savings boils down to lifestyle choices for some people (taking on higher mortgage payments, choosing expensive colleges, and so forth), a large contributing factor is having access to the right savings tools. Among workers with less than $1,000 set aside for retirement, the majority do not have access to a 401(k). In fact, a good 55 million U.S. workers don't get the option to participate in an employer-sponsored retirement plan, and while that's not a deal-breaker on the road to savings, it is another hurdle to jump.

The beauty of 401(k) plans is that they're fairly seamless. All you need to do is decide how much to contribute from each paycheck, and your employer will arrange to have a portion of your earnings filter automatically into its plan. Better yet, if your company sponsors a 401(k), there's a good chance you'll snag some free money out of the deal, because 92% of employers that provide access to a retirement savings plan also offer some type of matching incentive. And a little bit of free money can amount to a lot over time.

Still, there's no reason to throw in the towel just because you don't have access to a 401(k). There are other savings avenues to explore that can help you meet your retirement goals.

Another way to save

In the absence of a 401(k) plan through your employer, your next best retirement savings option is none other than an IRA, the most popular versions of which are the traditional and the Roth. No matter which variety you choose, annual contributions are capped at $5,500 if you're under 50, or $6,500 if you're 50 or older. While these limits are far lower than the current limits for 401(k)s ($18,000 for workers under 50, $24,000 for those 50 and over), you still stand to save quite a bit if you max them out, invest wisely, and, most importantly, start early on in your career.

Even if you don't manage to max out these limits (which most workers can't do), if you make an effort to begin saving while you still have several decades of growth ahead of you, you can turn a series of fairly small contributions into quite a large sum. Remember, like 401(k)s, IRAs offer the benefit of tax-deferred (or, in the case of a Roth, tax-free) growth. This means you won't pay taxes on your investment gains along the way, so you can retain and reinvest your earnings year after year.

Take a look at the following table, which shows how much money you stand to accumulate if you start funding your IRA with $2,400/year at various points during your career:

You can't help but notice the gaping difference between kicking off your savings efforts at age 25 versus starting just five years later. While saving those five extra years means putting just $12,000 more of your own money into a retirement account, thanks to the power of compounding, you'll come away over $200,000 richer for it.

The sooner you commit to saving, the greater your chances of securing a financially stable retirement. So if you're among the 25% of workers with under $1,000 set aside for the future, consider this your wakeup call: You have the ability to change your fate. You just need to be willing to make the effort.