According to recently released data, the IRS has processed 128.8 million tax returns submitted in 2017 so far, and has issued more than 97 million refunds. The average taxpayer who received a refund got $2,763, an increase of roughly 2% over last year. Here's a closer look at the data and how Americans are planning to spend their tax refunds in 2017.

To be perfectly clear, we only know the IRS data on 2017 tax refunds (from returns for the 2016 tax year) through April 21, 2017. Since 11.6 million taxpayers filed extensions this year, we won't know the finalized data for 2017 for quite some time.

Having said that, out of the 128.8 million returns the IRS has processed as of April 21, three-fourths resulted in a refund. $268.3 billion has been distributed to 97.1 million taxpayers, which translates to an average tax refund of $2,763. This is $52 more than the average refund at the same time last year. 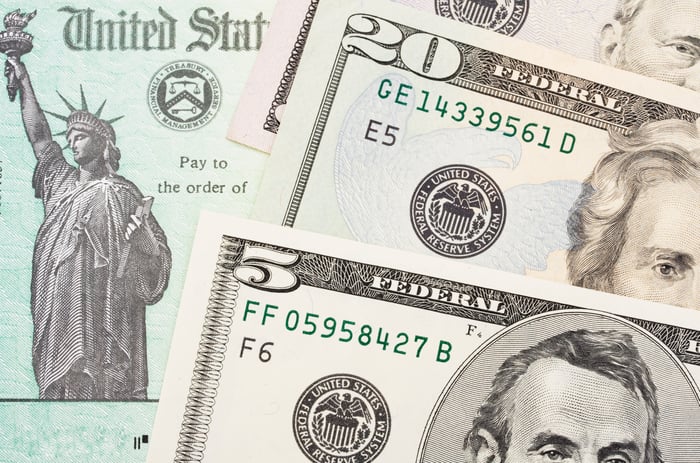 It's also interesting to note that taxpayers who had their refunds direct deposited had larger refunds on average. About 84% of refunds so far in 2017 have been direct deposited, with an average amount of $2,932.

How Americans plan to spend their tax refunds in 2017

According to a survey by GoBankingRates, the majority of Americans (79%) plan to either pay down debt or save their tax refund in 2017. Just a small percentage said they planned to use the money for a vacation or to splurge on a large purchase. Here's a breakdown:

A separate survey by Principal Financial found similar results. Nearly half of respondents said they planned to save or invest their refund, while 32% said they would use at least some of their refund to pay a short-term debt, like a credit card. The survey found that 21% of Americans expecting a refund plan to splurge on a big-ticket item, but this is somewhat distorted among age groups. Just 2% of millennials and 7% of Gen Xers said they would splurge, with most of this group consisting of older taxpayers (it makes sense -- baby boomers tend to already have more money in savings).

So, it's fair to say that despite the popular misconception of most Americans running out to the mall with their tax checks, most Americans actually plan to use their refunds in a financially responsible way.

Is a tax refund really a good thing?

As a final thought, it's important to mention that a big tax refund isn't necessarily a good thing. It's certainly better than owing the IRS a ton of money at tax time, but that's about the only benefit.

In a nutshell, unless it resulted from big tax credits like the Earned Income Tax Credit or the American Opportunity Tax Credit, a big tax refund generally means that you're having too much money withheld from your paychecks. It's important to keep one critical fact in mind -- a tax refund represents your money that you've lent to the IRS, interest-free, throughout the past year or more.

Maybe it's just me, but instead of getting the $2,763 average tax refund, I'd rather have each of my biweekly paychecks be $106 higher. That money could be used to save more for retirement, avoid accumulating credit card debt, or for whatever other expenses you have.

The bottom line is that if you got a big tax refund this year, use it wisely, but you may want to consider adjusting your withholdings to a more appropriate level with your payroll department.