Amassing $1,000 might seem like a reasonable enough feat, but the majority of Americans have yet to accumulate that much in a savings account. In a recent GoBankingRates survey, 69% of adults admitted to having less than $1,000 in the bank. Worse yet, 34% have no savings at all.

The problem with not having adequate savings is that you never know when an emergency might strike. You could lose your job, fall ill, or find yourself up against a major home repair that simply can't be postponed -- and if you don't have the cash available, you could end up in serious debt with an equally serious black mark on your credit history. If you don't yet have $1,000 to your name, here are a few ways to work toward that goal. 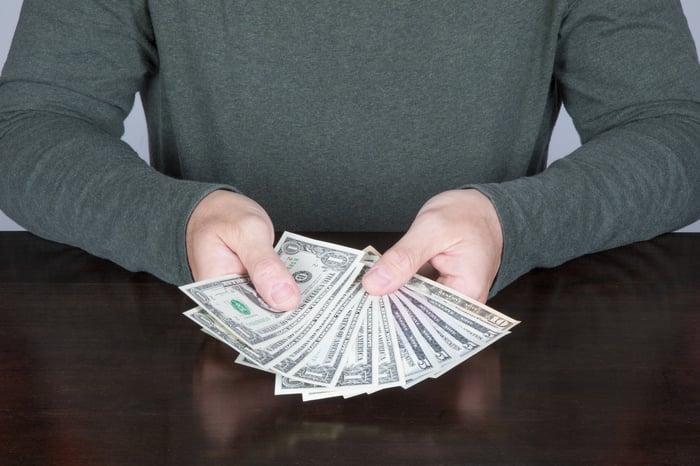 A household budget can open the door to savings by helping you identify your key expenses and get a better sense of where your money is going. But for some reason, nearly 60% of U.S. adults don't follow a budget. If you're serious about saving money, you'll need to create a road map of your various costs so you can see where there might be some fat to trim. Not sure where to start? You can consult this guide for ways to go about the process.

2. Cut back on small luxuries

While you may dread the idea of giving up your beloved morning coffee or brown-bagging your lunch on a regular basis, if you're willing to make a few smaller sacrifices, you can accumulate $1,000 rather quickly without having to compromise on the big stuff. Imagine that every time you walk to work instead of springing for bus fare, you shave $2 off your commute. Throw in the $2 you'll save by making your own cup of joe and the $6 you can easily save by packing your own sandwich, and you're looking at an extra $12 a day. If you do this twice a week, you'll have that $1,000 at your disposal well within a year's time.

Sometimes it's easier to eliminate one large expense than to give up the daily indulgences you've come to enjoy. But if you're willing to forgo that new TV or take a staycation instead of going away, you can save $1,000 in one fell swoop.

4. Pocket your raise or bonus

Depending on your company's fiscal year, your raise may not yet have kicked in. Similarly, if you work on commission or are eligible for bonuses, you may be looking at some additional income in the not-so-distant future. If you're about to get your hands on some extra cash, your best bet is to stick it right in your savings account. You can set up an automatic transfer with your bank so that the additional money that would normally appear in your paycheck never actually shows up, but rather, gets filtered seamlessly into savings. This will help you resist the urge to spend that money, and you won't miss it because you won't even know it's there.

5. Find a side hustle

Not everyone has the opportunity to get a raise or pick up extra hours at work. If your primary job doesn't offer a chance to snag some extra cash, your next best bet is to pursue income opportunities on your own. You might, for example, look into babysitting, dog walking, or teaching an instrument you've been playing for years. Or you might moonlight as a sales associate for a local business with a known busy season. You can even look into performing your regular job duties on a part-time, consultant basis on nights and weekends, provided your company doesn't have a policy forbidding such activity. You may need to get a bit creative, but if you're willing to put in the time, it's a surefire way to build up your savings.

While saving $1,000 is far better than saving nothing at all, most of us need considerably more than that to be truly protected in the face of an emergency. In fact, the typical worker should have anywhere from three to six months' worth of living expenses available in a savings account at all times, which means $1,000 alone just won't cut it.

That said, the last four tips on this list are fully scalable, so once you reach your initial $1,000 target, you can keep going until you've met your ultimate savings goal. It may take some time and some work, but the peace of mind you'll get in return will be well worth the effort.