Who wants to be a millionaire? The better question is, who doesn't? We'd all love a shot at that $1 million target, and while it might seem like an almost mythical sum of money, in reality, amassing that million is more doable than you'd think.

In fact, you may be surprised to learn that millionaires make up roughly 4% of the total U.S. population. And while some of these folks do inherit their fortunes or make a killing during their careers, for many people, attaining millionaire status is more a matter of working hard, saving well, and making smart investment choices. If you're looking to become a millionaire in time for retirement and you're willing to live below your means and consistently save a good chunk of your salary, you'll see that this goal is perfectly realistic after all. 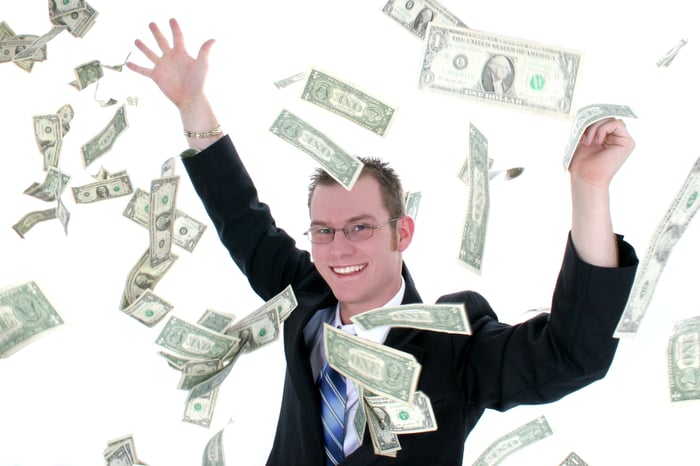 A solid million might seem like enough money to live the good life as a senior. But in the grand scheme of retirement, it's actually not all that much.

Seniors are living longer these days, which means you could be facing a 25- or 30-year retirement. If we stay optimistic and go with the latter, $1 million will give you $33,000 a year in retirement income. Now, think about the salary you're earning today. Chances are, it's higher than that. Even if we add in Social Security income, which, for the typical beneficiary today, is about $16,000 a year, saving that $1 million for retirement will give you an annual income of close to $50,000 over a 30-year period. Now that's an even more compelling reason to work toward that goal.

How to save $1 million

Saving $1 million might seem like an impossible feat, but the thing to remember is that when you start early, you get to take advantage of compounding on a long-term basis. Compounding is the concept of earning interest on interest, and it's what allows you to turn a series of relatively small contributions into a much larger sum over time.

Say you're earning $50,000 a year at age 30, and you're able to save 10% of your salary each year until you retire at age 67. Even if your salary never goes up, if your investments generate an average yearly 8% return, which is just below the stock market's average, you'll be a millionaire after 37 years.

Along these lines, say you get your hands on $50,000 as a lump sum of money (a generous amount, but far from $1 million). You could spend that cash on something fancy, like the sports car you've been eyeing, but if you save it instead, and it generates an average annual 8% return, you'll be a millionaire in 40 years' time.

To see what it'll take for you to become a millionaire, you can try plugging some numbers into the following calculator:

This tool uses your current savings, anticipated savings, expected return, tax bracket, and savings window to see what amount you'll need to set aside to accrue that $1 million.

Now one thing to keep in mind is that if you're saving for retirement with a tax-advantaged account, like an IRA or 401(k), you won't lose a portion of your earnings to taxes year after year. This will allow you to reinvest those savings and maximize your investments' growth until you're ready to retire.

It's all about priorities

Becoming a millionaire often boils down to getting your priorities straight. We just saw that saving 10% of a $50,000 salary will eventually yield a $1 million result, but giving up $5,000 a year of income at that earnings level isn't easy. That said, if you're willing to forgo certain luxuries along the way to make room for savings, you'll be much happier for it as a senior. This might mean taking a modest vacation every year instead of a luxury cruise, or driving a simple car instead of the decked-out model of your dreams. Or it might mean buying a smaller home and maintaining it yourself rather than outsourcing your upkeep.

Saving $1 million is doable in your lifetime, but it's probably going to involve a degree of sacrifice. If you start putting money aside at an early age and maintain that habit throughout your career, you're likely to join the ranks of those comfortable seniors who are proud to call themselves millionaires.