Though graduating college is a tremendous milestone worthy of celebration, those earning their degrees this spring and venturing off into young adulthood have a notable challenge to face: student loans. Last year, the average graduate came away with over $37,000 in debt, and this year's graduating class will probably be looking at similar numbers.

If you're graduating in 2017, you might be so initially overwhelmed by your loan payments that you forget to do one key thing: start saving. And while the idea of saving for the future might seem, well, downright laughable in the face of glaring debt, if you don't start putting money aside for retirement early on in your career, you'll be sure to regret it when you're older. 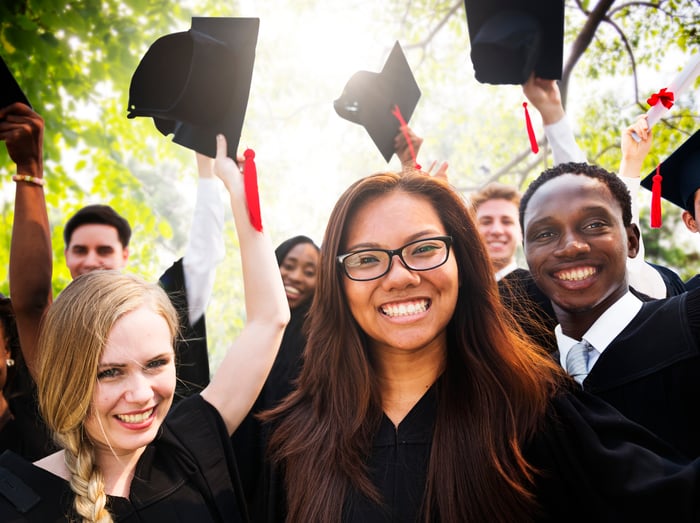 You may have heard that Americans are unprepared for retirement on the whole, but here's some news that might shock you: According to the U.S. Government Accountability Office, almost 50% of households 55 and over have no retirement savings at all.

Now while it might be tricky to pinpoint how much savings you'll need for retirement, it's pretty safe to say that $0 isn't going to cut it. But if you don't start saving at a relatively young age, you'll run into one of two scenarios: You'll either need to play catch-up when you're older, or you'll risk running out of money once you actually retire. Neither is good.

You see, contrary to what so many workers are led to believe, Social Security won't be enough to pay the bills in retirement. For the average worker, those benefits will -- at best -- replace 40% of what he or she used to earn. Most people, however, need at least 70% of their previous income to stay afloat financially in retirement, and without independent savings, you'll have fewer options for bridging that gap.

Furthermore, many retirees need considerably more than 70% of their previous income. Some, in fact, wind up needing more money than they did when they were working. That's why saving on your own is so crucial -- and the sooner you start, the less it'll cost you to amass a respectable nest egg.

Time is on your side

If you're first starting your post-college career, you might feel as though you're being held back by your student debt. But here's one thing you do have going for you: time. The more time you give your savings to grow, the more you stand to accumulate. It's a concept known as compounding, and it's something that recent grads in particular can benefit from.

The easiest way to illustrate the power of compounding is via the following table, which shows how much wealth you stand to accumulate if you start saving just $200 a month -- a fairly modest sum -- at different ages:

By kick-starting your savings efforts early, you have a chance to amass a $622,000 nest egg by contributing just $96,000 of your own money. That's because you'll have a 40-year window to earn money -- not only on your principal contributions, but also on your earnings.

But look at what happens when you wait until age 50 to start saving that $200 a month. Though you'll still have an opportunity to turn $36,000 in out-of-pocket contributions into $65,000, that's not nearly the same impressive gain we saw moments earlier.

For every year you work and hold off on retirement savings, you'll be losing out on a small piece of the compounding puzzle. And if you wait too long, you'll miss a real opportunity to turn a bunch of small contributions into something big. While finding the money to set aside might seem next to impossible, especially in the face of student debt, if you map out a budget early on and pledge to live below your means, you'll find ways to eke out small amounts of savings that can really add up over time. It's a far better alternative to ignoring your future and putting your long-term financial security on the line.