Please ensure Javascript is enabled for purposes of website accessibility
Free Article Join Over 1 Million Premium Members And Get More In-Depth Stock Guidance and Research
By Maurie Backman - May 28, 2017 at 7:43AM

A growing number of consumers are financing vehicles. But are they putting their credit at risk?

Americans certainly aren't strangers to debt. From student loans to mortgages to credit card balances, we've long been a nation of borrowers. But these days, a growing number of U.S. adults are adding one more form of debt to their tallies: auto debt.

According to data released earlier this month by the Federal Reserve Bank of New York, a whopping 107 million Americans have auto loans, up from 80 million people back in 2012. All told, an estimated 43% of the U.S. adult population owes money on a car.

In fact, auto loans have become so popular that they're outpacing mortgages. Five years ago, more people had home loans than they did car loans, but currently, those numbers have swapped. 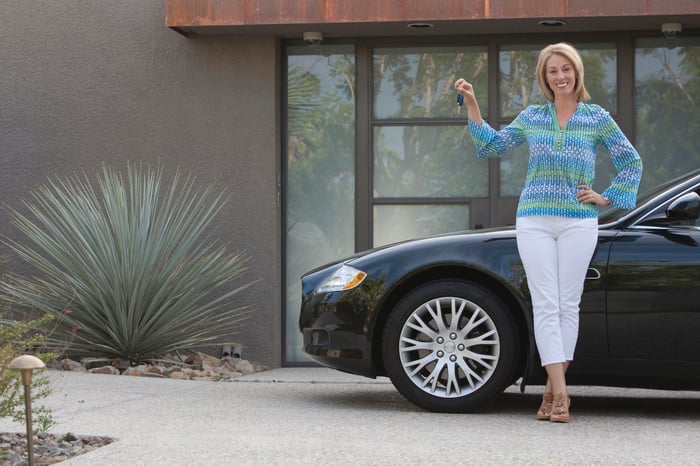 Now on the one hand, this increase in auto debt can be viewed as a good thing. If more people are getting car loans, it means more folks are in good enough financial standing to get approved for those loans. As my colleague, Matthew Frankel, reported earlier this year, the average American's credit score as of late 2016 was an even 700, which represents a solid 5-point increase from the previous year. And while a score of 700 isn't outstanding, it's respectable enough to make car ownership feasible.

On the other hand, any sort of increase in borrowing, whether it's housing debt, student loans, or auto financing, opens the door to an uptick in defaults. And that could spell trouble for borrowers whose credit is already on shaky ground.

Can you keep up with your car payments?

Most of us can't afford to pay for our vehicles outright, even if we're shopping in the used section of the lot. While there's nothing wrong with financing a vehicle, it's critical that you make sure you can really afford those monthly payments before signing a loan agreement. Otherwise, you risk falling behind on your payments, which could spell trouble for your credit.

Currently, an estimated 6 million borrowers are 90 days or more behind on their car payments. And that's bad for a couple of reasons. First, if you don't pay, you risk having your vehicle repossessed -- it's as simple as that. Because auto loans are considered secured debt -- meaning, the debt is tied to a specific piece of collateral -- you have more to lose by skipping out on those payments. Secondly, if you're habitually late on your auto loan payments, or don't pay at all, you'll risk damaging your credit score to the point where you can't get financing for other necessities for many years to come.

Though there are different factors that go into determining your credit score, your payment history carries the most weight of the bunch. Being late with payments, or skipping them entirely, could send your score into dangerous territory, at which point it might take you years to recover. It therefore pays to closely examine your finances to determine whether you can really swing that car payment month after month. Remember, just because you're approved for a loan doesn't mean that it's actually manageable. You may have other pressing expenses that don't come up on your loan application, so don't ignore what your lender can't see.

Finally, think about the cost of owning a car outside of your monthly payments. There's insurance, maintenance, and registration, all of which can drive up your total expense. In fact, AAA estimates that it costs $8,700 a year, on average, to own a vehicle, so if you have a lower-cost alternative available, like public transportation, you may want to hold off on car ownership until your finances are in a better place.

Owning a car is a luxury that many Americans enjoy, so it's natural to want to jump on that bandwagon. Just make sure you're in a good enough position to keep up with your payments before you take on a new form of debt.