For many years now, 62 has been the most popular age for older Americans to collect Social Security. And it makes sense, since it's also the earliest age seniors are allowed to get at those benefits. The problem, however, is that filing for Social Security at 62 means taking a lifelong reduction in payments -- something most Americans can't afford to do.

Yet a new survey from Fidelity Investments shows that Americans seem to be getting smarter about when to file for benefits. According to newly released data, a growing number of workers aged 55 to 61 are planning to wait past age 62 to claim Social Security. This year, in fact, just 28% of 61-year-old respondents think they'll file for benefits as early as possible, marking a steep decline from 2008, when 45% of 61-year-olds said they planned to file immediately. 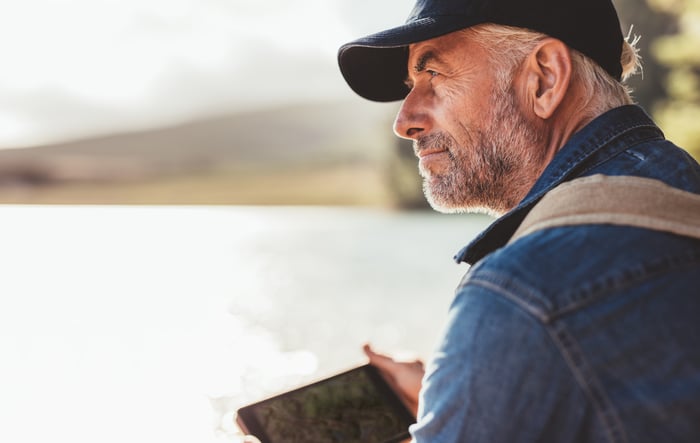 Meanwhile, 6% fewer respondents aged 55 to 61 say they'll take Social Security at 62. The average pre-retiree surveyed by Fidelity plans to claim benefits at 67, which is the Social Security administration's full retirement age for many of them.

Waiting on Social Security can help seniors maximize their monthly benefits, so the news out of Fidelity is certain encouraging. That said, a large number of Americans are still relying too heavily on Social Security to cover their senior living costs -- and that's a definite problem.

Though a growing number of seniors apparently won't be rushing to claim Social Security, there's still a considerable percentage of pre-retirees out there who are hoping to snatch up those benefits as soon as they're able. But in doing so, those folks are going to take a serious hit to their monthly payments.

Your Social Security benefits are calculated based on your lifetime earnings. Once you reach your full retirement age, you'll be eligible to collect those benefits in full. But if you file for benefits before reaching your FRA, you'll slash your payments by 6.67% per year for the first three years before your FRA, and then another 5% per year on top of that.

The following table will show you how to find your full retirement age depending on the year you were born:

If you were born in 1960 or later and you decide to file for benefits at age 67, you'll get to collect the base amount you're entitled to. But if you file at age 62, you'll slash your benefits by 30% -- for life. Given that a good 60% of retirees rely on Social Security to provide the majority of their monthly income, cutting those benefits by filing early means setting yourself up for a cash-strapped retirement. It's a different story if you have adequate savings -- but most Americans don't. In fact, the median savings amount among pre-retirees aged 56 to 61 is just $17,000, which translates into a mere $70 a month in income over a 20-year retirement.

It's therefore encouraging to learn that more Americans won't be taking Social Security until reaching full retirement age. And it's even more reassuring to hear that a growing percentage of pre-retirees are planning to wait until age 70, especially since seniors get an 8% boost for every year they hold off past full retirement age.

Fidelity offered a number of possible explanations for older Americans' shifting attitude on when to first claim benefits. Back in 2008, when the study was first conducted, 53% of the 61-year-olds who were surveyed were also unemployed -- after all, we were in the depths of the Great Recession. For those folks, filing for Social Security early was probably a no-brainer. This year, however, only 41% of 61-year-old respondents identified as unemployed. Furthermore, back in 2008, more older Americans felt they'd be better off taking their money early and investing it themselves, rather than waiting for delayed-retirement credits from the Social Security Administration.

But if there's one thing that hasn't changed over the nine-year period since Fidelity's survey began, it's the way recipients are planning to use their benefits. Today, 79% -- the same percentage as back in 2008 -- say they expect to use their Social Security income to cover their basic living expenses, which points to a general lack of savings.

While waiting on Social Security is a step in the right direction, the 41% of older Americans without any retirement savings whatsoever need to do more than just delay their benefits; they also need to start saving independently. Even after delaying Social Security, the average recipient will only receive enough in benefits to cover about 40% of their pre-retirement income. But most retirees -- even those willing to live frugally -- need at least 70% of their previous income to stay afloat financially, and some require considerably more.

If you're an older American who has yet to start saving, then you need to start now, while you still have an opportunity to play catch-up. You can start by maxing out your 401(k) or IRA; the annual contribution limits for workers aged 50 and older are $24,000 and $6,500, respectively. Though holding off on Social Security is a good start, you'll need to step up your savings game if you want a shot at a financially secure retirement.