Major reforms to government programs are politically challenging and therefore rare, but big changes may be coming thanks to the American Health Care Act. The AHCA, aka Trumpcare, would repeal and replace Obamacare with an alternative plan that, among other things, calculates insurance subsidies differently and repeals many of Obamacare's taxes.

One of the biggest changes Trumpcare would make relates to Medicaid, a decades-old social insurance program signed into law in 1965 to provide healthcare coverage for individuals with limited means. Medicaid covered 97 million people throughout 2015, and it pays the bills for a surprisingly wide variety of services, including some that middle-class families rely on. This coverage could be at risk. 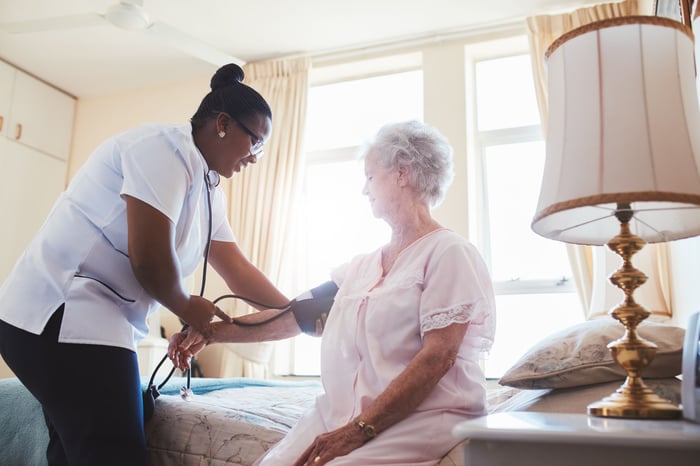 What would happen to Medicaid under Trumpcare?

Trumpcare proposes two major changes to Medicaid. The first is rolling back the Obamacare Medicaid expansion that allows families with incomes up to 133% of the poverty level to qualify for Medicaid. The second big change involves modifying funding so the federal government no longer provides Medicaid money to states based on the actual costs of insuring those who are enrolled. Instead, the federal government would pay a capped amount of money for each enrollee.

Capped funding would be provided based on the total number of enrollees, and a "growth rate" formula would determine how much the federal government provides per enrollee. When federal funds are capped, states face funding shortfalls if Medicaid spending exceeds the limit on federal aid.

If Trumpcare passes as written -- which is unlikely, given that the bill is facing substantial revision in the Senate -- record budget cuts to Medicaid will occur over the next 10 years. However, any modifications to Trumpcare likely won't save Medicaid from deep cuts, because there is strong support within the Republican party for changing the program's funding to a per-capita formula or a "block grant," which also decouples funding from need.

How would this affect Medicaid beneficiaries?

Without a crystal ball, predicting the exact impact of modifying Medicaid's funding structure is challenging. One thing is certain: The least likely option is that Medicaid benefits will continue in their current form. Close to half of all states already face budget shortfalls, and the Center on Budget and Policy Priorities estimates that the proposed changes to Medicaid would shift $370 billion in expenses to the states over the next decade. The Congressional Budget Office warns that changes in Medicaid enrollment would be largely responsible for an estimated 24 million people becoming uninsured between 2018 and 2026.

Projections can be uncertain, but one can look to the past as a precursor of the future. The impact of the Personal Responsibility and Work Opportunity Reconciliation Act of 1996 is a real-world illustration of how changes to federal funding can make benefits far less generous. This Act, often referred to as "welfare reform," was signed into law by Bill Clinton, and it eliminated Aid to Families with Dependent Children, the program providing cash assistance for poorer families. Temporary Assistance for Needy Families (TANF) was created in its place, but TANF imposed new work requirements, lifetime limits, and other modifications making it more difficult to qualify for cash assistance.

Importantly, TANF also changed the funding structure to a block grant, rather than allowing payments to be determined based on need. With block granting came reduced federal oversight into the operation of state welfare programs. States had freedom to impose new restrictions on benefits and had leeway to use federal money for a broad range of expenditures. Many states now use federal funds not to provide cash assistance to their poorest residents, but to fill budget gaps and fund things like college scholarships.

The result: In 2010, 27 out of 100 families with children living in poverty received cash assistance, compared with 68 out of 100 families in 1995, before the reforms took effect. Median benefits to families receiving cash assistance have fallen 20% (after adjusting for inflation), and the number of families in the U.S. living on less than $2 daily per person has doubled, according to the National Poverty Center at the University of Michigan.

If Medicaid funding is decoupled from actual expenditures, and states are given more leeway in administering Medicaid, benefit cuts are inevitable, and they may have a similar effect to welfare reforms in terms of both quality and availability of benefits.

How would middle-class families be affected?

If your income is currently too high to qualify for Medicaid, cuts may still hit your pocketbook directly.

Six million of Medicaid's beneficiaries are seniors, many of whom are using Medicaid services to pay long-term care costs. Around 70% of seniors will need long-term care. The average need for care lasts three years, and average costs are estimated at $82,608 for nursing home care and $38,515 for a home health aide.

Many ordinary families also have disabled children who benefit from Medicaid spending. Medicaid reimburses schools about $4 billion annually for special education services and student educators, and advocacy organizations like the Save Medicaid in the Schools Coalition worry that Medicaid cuts could force states to "ration healthcare for children,."

Medicaid pays for healthcare for the poor, disability services, long-term care, and more. Changes to this program could affect us all.