Here's a guide to the U.S. states with no income taxes.

There are seven U.S. states with no income tax whatsoever and two more that don't tax wage income. If you live in any of the other 41 states or D.C., your state has an income tax. Here's a quick guide to the tax-free states, and the answer to whether having to pay an income tax is really as beneficial as it might seem.

There are seven U.S. states that have no state income tax whatsoever: 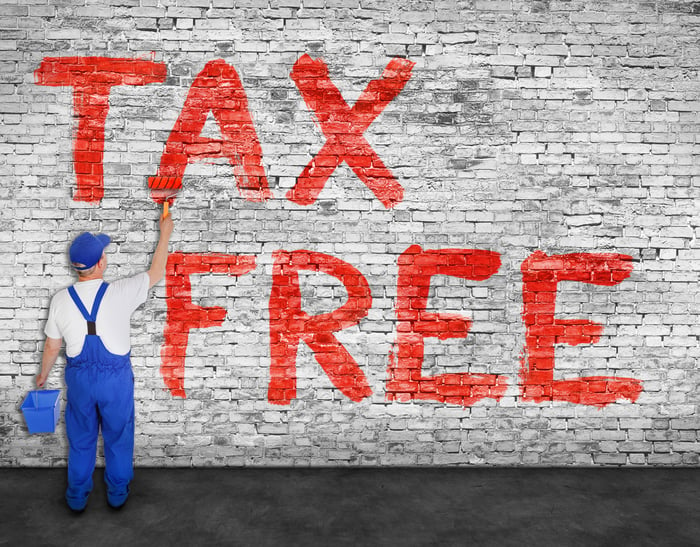 1. Alaska -- One of the few states with no state income tax or sales tax, Alaska residents actually get paid an annual "dividend" to live there, as a result of the state's natural resource revenue.

2. Florida -- Much of Florida's government is funded by sales taxes, which are fueled by the state's tourism industry. Plus, property taxes in Florida are higher than the national average.

4. South Dakota -- Unlike many of the other states without income taxes, South Dakota's sales tax rate is quite low, at just 4%. The state does have other revenue sources, such as excise taxes and video lottery revenue.

5. Texas -- In addition to sales taxes, Texas collects its revenue from royalties on its oil and gas production, as well as from relatively high property taxes.

6. Washington -- Instead of an income tax, Washington relies on its above-average sales tax and its gasoline tax, which is among the highest in the U.S.

7. Wyoming -- The state's revenue comes from its coal mining revenue as well as other sources, such as hunting licenses, which bring in an average of $59 for every resident.

In addition to the seven states mentioned above, Tennessee and New Hampshire are nearly tax-free. Specifically, while they don't tax earned income, there is a tax on interest income and dividends. So, if you live in one of these two states and only get income from a paycheck (not from investments), you don't have to worry about paying a state income tax.

In fact, Tennessee is set to become the eighth tax-free state in 2022, as its 6% tax rate on interest and dividend income is being reduced by 1% per year, beginning in 2016.

So, unless your state is one of the nine mentioned here, the answer to the original question is "Yes, your state has an income tax."

Is living in an income tax-free stare really such a good thing?

However, before you pack your bags, it's important to think about whether living in a tax-free state will actually be a financial benefit to you or not. As I briefly mentioned along with some of the tax-free states, there are several other ways states can bring in revenue, aside from assessing an income tax.

Personally, I lived in a tax-free state for several years (Florida) and a quick calculation shows that I easily paid more in taxes than I do now in South Carolina, where there is a state income tax. Property taxes alone more than made up the savings I got from not having to pay state income tax. The same may be true for you, especially if you're not in the higher income brackets.

Income tax systems, for the most part, have tax brackets that make them progressive taxation systems. In other words, people who earn more pay more, while lower earners pay less as a percentage of their income.

On the other hand, state sales tax systems, gasoline taxes, property taxes, and other sources of revenue usually charge one rate to all taxpayers, making them less beneficial to lower earners. So, if your state substitutes higher flat taxes like these for an income tax, it can end up costing you more than an income tax would. For example, in South Carolina, the lowest state income tax bracket has a rate of just 3%. Meanwhile, the state's 6% sales tax rate is assessed without regard to income.

Even worse, consumption-based taxes can actually be regressive, meaning that lower earners end up paying a higher tax rate. This is because lower-income individuals tend to spend more on purchases, as a percentage of income, than higher earners. In fact, a recent Bankrate analysis determined that four of the five most regressive tax systems in the country are found in states with no state income tax -- Washington, Florida, South Dakota, and Texas.

Because of this, living in a state without an income tax is generally beneficial if you're a high-income household and not such a great thing if you're toward the lower end of the income spectrum.

The bottom line is that state income taxes are just one piece of the taxation puzzle, so be sure to evaluate how all of a state's tax rates affect you, not just how much you're paying in income tax.