Sales taxes, levied on retail goods and services, are often ignored in the tax debate, as politicians and voters tend to focus on income taxes. And unlike income taxes, sales taxes are levied by states and municipalities, rather than the federal government -- though they can still take a big bite out of one's earnings. On the state level, sales and gross receipts taxes, which charge businesses for sales, contribute 30.1% of overall revenue -- nearly as much as income taxes, which bring in 36.6%.

In 2013, sales and gross receipt taxes nationwide totaled $254.7 billion -- a 3.9% increase from the year before -- which means Americans spent an average of $806 on sales taxes last year. That's less than the $309.6 billion, or $979 per American, spent on state income taxes. However, including selective sales taxes, which are levied on goods like gas and cigarettes, Americans actually pay more in sales taxes than they do in state income taxes. 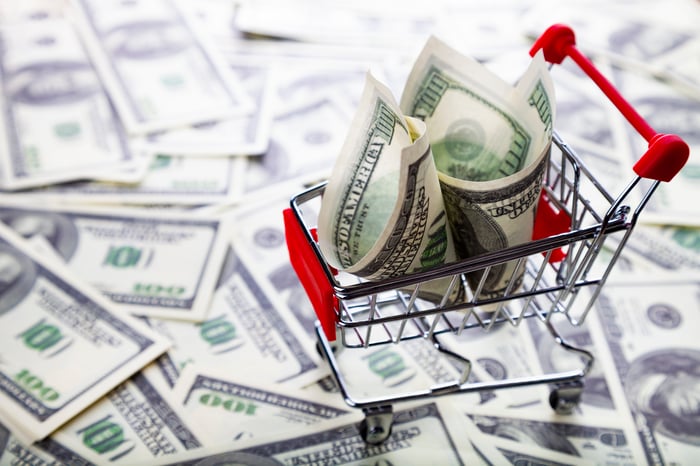 Sales taxes vary widely from state to state. Some states charge no sales tax, while some localities charges as much as 10% when state and local sales taxes are combined. Tennessee, on average, has the highest sales tax at 9.44%.

There are four states with no sales tax: Delaware, Montana, Oregon, and New Hampshire. A fifth, Alaska, has no state-level sales tax but allows municipalities to impose the retail-level tax. As a result, the average sales tax rate in Alaska is 1.69%.

While 10% of U.S. states impose no sales tax, a much smaller percentage of the population lives in one of these states -- only about 2.5%. Let's look at the tax profile in each of these states.

New Hampshire
Known for its motto, "Live Free or Die," New Hampshire has a wide libertarian streak and is proud of it. The state has no general sales tax or income tax, instead relying on the third-highest property taxes in the nation to fill its coffers. Still, Granite State residents rank No. 44 based on percentage of income paid to the state. The vast majority of that goes through property taxes.

Delaware
Perhaps more than any other state on the list, Delaware relies on its lack of sales tax to draw shoppers from bordering states. Delaware's income tax is the 17th-highest in the country, and residents pay an average of $737 in property taxes, putting Delaware at No. 15 based on state and local tax burden. The state is also heavily reliant on corporate taxes from out-of-state companies that are registered in Delaware due to its business-friendly environment; these contribute 40% of the state's tax base.

Montana
Over half of Montana's tax receipts come from income taxes and severance taxes -- that is, the money corporations pay for extracting natural resources. Montana ranks No. 38 out of the 50 states based on its average state and local tax burden of $3,137, or 8.6% of income.

Alaska
Like Montana, Alaska is a major beneficiary of the oil and gas industry. Alaska and New Hampshire are the only two states in the country with neither a sales tax nor an income tax, and Alaska is also known for its libertarian attitude. With a 7% tax burden, the state is ranked the second-lowest in the country; petroleum revenue, investment income, and federal dollars make up nearly the entire state budget.

Oregon
Last on the list is Oregon, by far the most populous of these five states. Unlike most of the states on the list, Oregon has a high overall tax burden, ranking No. 16 in the U.S. with a payout rate 10.1%. Its top income tax rate of 9.9% is the third-highest in the country. The decision to forego a sales tax in Oregon seems a matter of structure, rather than lack of need for revenue. Oregon relies more on income taxes than any other state, and given the high unemployment of recent years, the state has faced deficits. Votes have rejected a sales tax nine previous times, but state politicians are hoping to reform the tax system.

Foolish takeaway
There is no such thing as perfect tax, and sales taxes have been criticized as being regressive, or putting a heavier burden on poor people. However, they can also serve to diversify a tax base and bring in revenue from tourists and visitors from other states, which other forms of taxation, such as income or property, cannot do. Each of the states above has its own reason for not having a sales tax, and although an annual tax bill of largely $1,000 is hardly enough to incentivize a move to another state, the lack of sales taxes likely helps boost retail sales, especially in states that border high-sales-tax states, thus offering locals some relief.