When we talk about retiring on time, we're generally referring to leaving the workforce at what the Social Security Administration deems full retirement age. For today's older workers, full retirement age is 66, 67, or somewhere in between, and if you wait until that age to file for Social Security, you'll collect your benefits in full. For the purpose of our discussion, retiring early means exiting the workforce prior to that age -- and believe it or not, a large number of Americans do it.

According to the U.S. Census Bureau, the average retirement age in the U.S. is 63 -- which, incidentally, is a year later than the earliest age at which you can collect Social Security retirement benefits. There are a few drawbacks to ending your career earlier than your full retirement age. For one thing, if you file for Social Security simultaneously, you'll lose out on a portion of your benefits. You'll also limit your opportunity to save more money toward the end of your career when, presumably, your earnings level is at its highest. 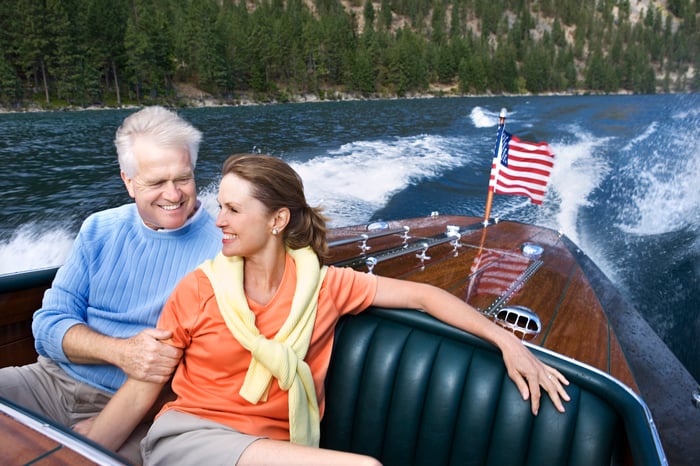 On the other hand, there are a number of good reasons to retire early. Here are just a few.

1. You'll enjoy your leisure time while you're younger (and healthier)

Countless people dream of traveling extensively in retirement or pursuing hobbies they didn't have time for during their working years. If you break free from the shackles of your job earlier in life, you'll get to pursue your passions while you're more energetic and in better health than you're likely to be at, say, age 70.

It's an unfortunate fact that more than 50% of Americans consider themselves unhappy at work. Of course, unhappiness comes in varying forms and degrees, but if your job is a major source of stress, retiring early might actually be a smart move health-wise.

On the flip side, studies have shown that working longer can also lead to a longer life, especially if your job promotes mental stimulation, social interaction, and physical exercise or activity. But if your job is nothing but a perpetual source of misery, leaving it early might actually result in an improvement in your mental and physical health.

3. You'll get a chance to embark on a new business opportunity

Many of us don't think of retirement as a time to explore new career options, but if there's a particular business idea you've always wanted to pursue, but didn't do so because you didn't have the time, now's your chance to go for it. According to the U.S. Bureau of Labor Statistics, Americans aged 65 and older are more likely to be self-employed than people of any other age group. Retiring early will give you a chance to start your own venture and enjoy its success on multiple levels. Better yet, if your business is lucrative enough, it might more than compensate for whatever salary you decide to give up a little early.

How to retire early

If the idea of retiring early sounds good to you, you'll need to start planning for it as soon as possible. Those people who you see retiring early aren't necessarily super-high earners; rather, many of them start saving as early, and as much, as they can.

You can start by living below your means and banking any money that's left over, with the goal of ramping up your retirement plan contributions over time. Currently, workers under age 50 can put up to $18,000 a year into a 401(k) and $5,500 a year into an IRA. These limits then increase by $6,000 and $1,000, respectively, for workers 50 and over. If you max out whatever limit you're eligible for year after year, you'll get to benefit from the tax-advantaged growth that both 401(k)s and IRAs offer.

Even if you can't quite max out the aforementioned limits, if you invest your nest egg wisely, you can turn a series of middling contributions into a pretty remarkable sum over time. For example, saving $1,000 a month for 30 years will leave you with an ending balance of $1.1 million if your investments generate an average return of 7% per year, which is actually a few points below the stock market's long-term average. Set aside $1,500 a month for 30 years, and you'll be sitting on a cool $1.7 million.

Retiring early is often a matter of setting priorities and committing to meeting a goal. If the idea of leaving the workforce ahead of schedule appeals to you, create an aggressive savings plan now and stick to it through thick and thin. You don't need to be rich to retire early; you just need to be smart about how you spend and save your money.