Forget the myths about Medicare being broke. Here's the truth.

There are several popular misconceptions about the financial condition of Medicare, which virtually all American senior citizens rely on to cover healthcare expenses in retirement. Many people believe Medicare is broke, or that there's virtually no chance that Medicare will still be around by the time they retire. Spoiler alert: Neither of these assumptions are true.

Let's set the record straight. The Medicare trustees recently released their annual report, which detailed the financial condition of Medicare at the end of 2016, as well as future projections of the program's finances for the next 75 years. Here are some of the important takeaways from the report that you should be aware of, and what it means for you. 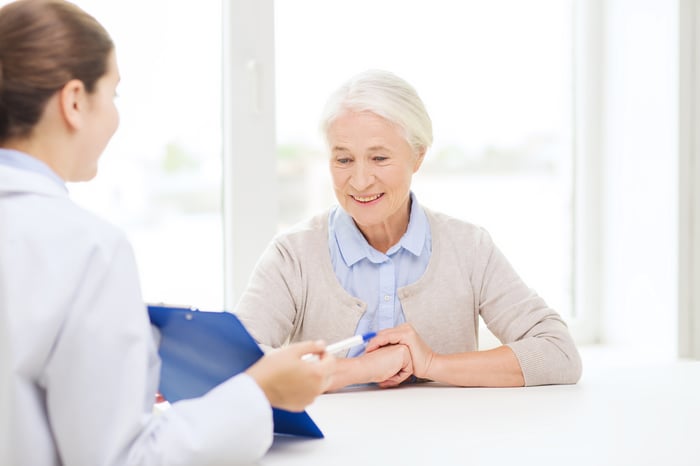 The safety of Medicare Parts B and D aren't in question

Without getting too in depth, Medicare Parts B (medical insurance) and D (prescription drug coverage) are mainly funded through premiums paid by beneficiaries, as well as by general revenue. Both of these sources can be adjusted relatively easily. In other words, if these programs project higher operating costs next year, they can simply raise premiums to generate more revenue.

On the other hand, the HI trust fund supports Medicare Part A, which is free to the vast majority of retirees. Therefore, there is very little premium income that can be controlled.

The major source of revenue for the HI program is the Medicare portion of the payroll tax, as well as an additional 0.9% additional Medicare tax assessed on higher-earning Americans. This tax rate is the current law, and to adjust it to increase revenue would require an act of Congress.

Medicare Part A is also fine -- for now

Having said that, Medicare Part A is on decent financial footing for the time being. In 2016, Medicare Part A took in $290.8 billion in total income and paid out $285.4 billion in benefits and administrative expenses, for a surplus of $5.4 billion. This surplus was added to the HI trust fund, which held a total of $199.1 billion in reserves at the end of 2016. These reserves are invested in U.S. Treasury securities, and earn interest, which serves as another financing source for the program.

Furthermore, surpluses are expected to continue in 2017 through 2022, so between these surpluses and the interest earned on the trust fund's reserves, we can expect to see the reserves grow significantly over the next several years. In 2022, the balance of the HI trust fund is projected to be $265.8 billion, about 33% higher than the current level.

The problem with Medicare's finances

The trouble starts after 2022. Beginning in 2023, Medicare Part A is expected to start running deficits, which are expected to get larger as time goes on.

As a result of the rapidly growing deficits, by 2029, the reserves in the HI trust fund are expected to be completely exhausted. The reason is a simple cash-flow problem.

The massive baby-boomer generation is reaching retirement age and leaving the workforce. And people are living longer lives, in general, which translates to Medicare beneficiaries drawing benefits for more and more years. In a nutshell, fewer people will be paying into the system and more people will be enrolled for benefits.

If Congress fails to make any changes to increase Medicare's long-term solvency, and the Hospital Insurance trust fund runs out of money in 2029, it's important to remember that this wouldn't necessarily be a death sentence for the program. Payroll taxes would still be collected, and Medicare would still receive 1.45% of taxable payroll from both employers and employees. High earners would still pay an additional 0.9%.

In fact, the trustees report estimates that the incoming revenue will still be enough to cover 88% of the hospital insurance program's cost. So, as a worst-case scenario, hospital insurance would be forced to cut benefits by 12% after 2029. I'm not trying to downplay what such a cut would mean -- this would absolutely be a financial burden on many retirees. The average Medicare beneficiary received a $4,968 benefit from their hospital insurance in 2016, so a 12% cut would mean an increase of nearly $600 in the average senior citizen's out-of-pocket medical expenses. However, the point is that Medicare wouldn't simply go away if the trust fund ran out of money.

The bottom line is that, even without any changes, Medicare is completely fine for now, and will continue to be for more than another decade. After that, however, there's a serious possibility that Medicare will run out of money if nothing is done to fix the shortfall. The good news, however, is that there's still plenty of time to do something about it, such as increase Medicare taxes, or implement another solution.