When you finally bid your job adios and prepare to sail off into the world of retirement, you'll face an important decision: what to do with your 401(k) account. A CFPB study revealed that one in three workers who leave their jobs while in their 50s choose to cash out their 401(k) accounts, but that decision can create huge financial problems both immediately and in the future.

During your 50s is a terrible time to take money out of your 401(k) account, thanks to the early withdrawal penalty. If you remove money from a tax-deferred retirement account before age 59 1/2, the IRS will slap a 10% penalty on the withdrawal, payable when you file your federal income taxes for the year. For example, if you had $200,000 in your 401(k) account and you pulled it all out when you quit your job, if you're younger than 59 1/2, you'll owe the IRS $20,000 in penalties. That's a pretty high price to pay for not waiting just a few years longer to access your money. Not to mention the income taxes you'll also owe on the withdrawal (see the next section for more on this).

There is one exception to the early withdrawal penalty: if you leave the employer sponsoring your 401(k) for any reason and you're 55 or older, you can take money from your 401(k) without penalty during that year. You'll still owe income taxes, though. 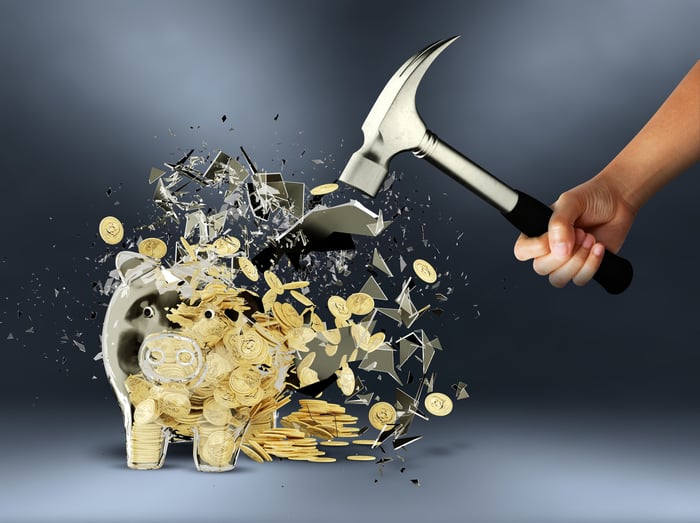 So once you reach age 59 1/2, is it than a good idea to cash in your 401(k)? Probably not. You see, while you will no longer owe the 10% early withdrawal penalty at that point, you will owe income taxes on the entire withdrawal. And because the money you withdrew count as income for tax purposes, it will likely kick you up into a higher tax bracket.

Perils of the lump-sum distribution

Taxes aren't the only issue involved in lump-sum 401(k) distributions. The money in your 401(k) is intended to support you through the length of your retirement, a period that will likely last 30 years or more. Yet a recent Harris Poll survey found that 21% of workers who'd taken a lump-sum distribution from their pensions spent the money within 5 1/2 years. Having all that money lying around in and accessible form makes it easy to overspend; on the other hand, if you leave your money in investments inside a retirement account, you'll likely think twice before tapping into the money.

If you don't want to leave your money sitting in your 401(k) account after you retire, then the best way to manage it is to roll it into an IRA. A rollover protects you from horrific tax bills and allows your investments to keep on growing tax-free.

If you meet the income limit rules, an even better approach might be to roll part of the money into a traditional IRA and part into a Roth IRA. You'll have to pay taxes on the part going into the Roth account, so you'll need to manage the amounts carefully to make sure that your tax bill for the year doesn't become ridiculously large. But once you've moved the money into a Roth account, you won't have to pay taxes on it as you take it out during retirement – and that can save you a bundle during your retirement years, when your fixed income will make cutting expenses even more important.

Finally, if the money is safely in an IRA, you won't be so tempted to cash it all in for a trip around the world – it can sit there and quietly grow, leading to a happily funded retirement for you.