Some people shy away from annuities because compared to other investment options, they can be complicated and difficult to understand. But if you're looking to secure additional income in retirement and have already maxed out your options for funding an IRA or 401(k), an annuity may be your next best bet. Before you purchase one, though, it's critical that you familiarize yourself with some of the rules involved. Here are a few you should be aware of.

One of the reasons traditional IRAs and 401(k)s are so enticing is that you get an up-front tax break for contributing. In the case of an IRA, you fund your account and then get to deduct that amount on your tax return. With a 401(k), you tell your employer how much you want to contribute, and that amount is taken out of your paychecks, pre-tax, and used to fund your account. 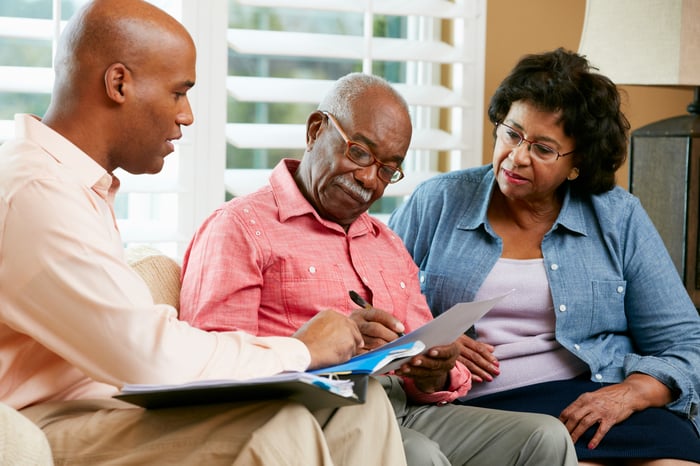 Annuities bought outside an IRA, however, are funded with after-tax dollars, so you won't snag an immediate tax break for purchasing one. However, the money in your annuity gets to grow on a tax-deferred basis, which means you won't pay taxes on any gains until you begin taking withdrawals.

The purpose of an annuity is to provide a stream of income in retirement, so you can't just cash out your account when you feel like it. Just as you'll face an early withdrawal penalty for removing funds from a traditional IRA or 401(k) prior to age 59-1/2, so too will you get penalized to the tune of 10% of your withdrawal amount by tapping your annuity prematurely.

Now there are a few exceptions to this rule, such as if you happen to become permanently disabled or, worse yet, pass away, but generally speaking, it's a bad idea to touch your annuity before reaching 59-1/2. Penalties aside, that money is supposed to serve as an income source in retirement. Withdraw it to go on vacation or fix up your house, and you'll lose out on that cash when you need it the most.

3. Canceling your annuity generally comes at a cost

When you sign an apartment lease, you're agreeing to rent your home for a certain number of months, and you'll typically pay a penalty for breaking that lease early. The same holds true for an annuity -- break that contract, and you could face hefty surrender charges, which are based on the amount you ultimately withdraw.

Though surrender charges can vary based on your annuity provider and the type of contract at hand, they typically start at 7% during the first year of your annuity, and drop 1% each year until they're whittled down.

Now as is the case with early withdrawals, there are some exceptions. You can generally remove up to 10% of your annuity's value each year without getting hit with surrender charges. Similarly, if you become terminally ill or disabled, or if you pass away, the surrender charge for accessing that money early is usually waived. Finally, if you change your mind about your annuity right away, you can typically avoid a surrender charge if you cancel your contract within 30 days. Otherwise, be prepared to pay.

Just as the money you remove from a traditional IRA or 401(k) is taxable in retirement, so too are annuity withdrawals subject to taxes. The way those distributions are taxed, however, is a bit unusual. Generally, if you take money out on your own schedule, annuities are taxed on a last-in, first-out basis, so that when you take your withdrawals, they'll initially be considered to have come from the earnings portion of your account -- and, as such, will be taxed. But once the value of your annuity falls below the amount you paid in premiums, your withdrawals will no longer be taxable. If you convert the annuity to a stream of payments, then the portion of each payment representing earnings will be taxable, while the portion representing your initial premium payment will be treated like a tax-free return of capital.

Though an annuity isn't the right choice for everyone, it could be a good way to secure an additional income stream in retirement. It pays to read up on the pros and cons of annuities to see whether this route is right for you.