Most of the solutions that have been proposed involve just two types of fixes -- benefit reductions or tax increases. Since nobody can seem to agree on the right combination of those, maybe it's time to start thinking outside the box about ways to make Social Security viable for the long run. With that in mind, here are three interesting Social Security fixes that have been suggested recently. 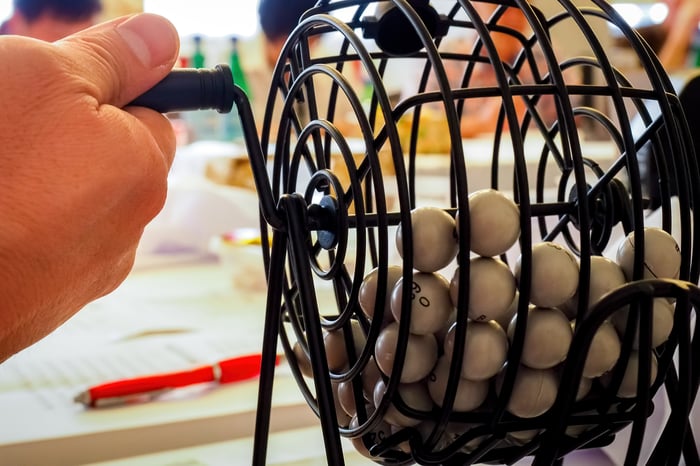 Could a lottery be the answer to Social Security's funding problems? Image Source: Getty Images.

An investment account for every baby born in the U.S.

Financial planner Ric Edelman has an interesting proposal when it comes to fixing Social Security. Basically, the federal government would create an investment account funded with $7,000 for every child born in the United States over the next 35 years, with all investments handled by a panel of experts appointed by the president and Congress.

After the money has been growing for 35 years, the government gets back its original $7,000, indexed for inflation. This would then be used to fund the accounts for newborn children, making the program self-sufficient for the long run. The rest of the money in the account continues to compound and grow until the account holder reaches age 70, at which point the account would distribute monthly benefits to the owner, just like Social Security does now.

Could it work? Well, $7,000 compounded at a historically conservative 6% annual growth rate for 35 years would result in a $53,800 account balance, at which point an inflation-adjusted $7,000 (about $19,700, based on historical inflation data) would be taken out of the account to fund the program. The remaining balance would compound for another 35 years, which could result in a balance of $262,095 and be used to create a significant monthly income stream for beneficiaries.

Should we invest some of Social Security's reserves in the stock market?

As of the most recent Social Security trustees' report, the program has $2.85 trillion in reserves. The problem is that this money is earning relatively small investment returns, and is projected to run out in 2034 thanks to the ongoing retirement of the massive baby boomer generation.

One potential solution calls for gradually investing 40% of the reserves in marketable securities (stocks), which would almost certainly achieve better long-term investment returns than the special government bonds the Social Security reserves are invested in currently.

While this could definitely be a way to boost the Social Security trust fund's investment performance, there are a few issues. First, stocks are risky, especially when compared to government bonds. At a time when Social Security's long-term finances are on shaky ground, it may be unwise to add significant risk.

In addition, it's highly unlikely that this change in investment strategy could solve the problem all by itself. Using historical inflation-adjusted return assumptions, the Social Security Administration determined that this strategy would extend the amount of time Social Security could continue to pay full benefits by just one year.

A lottery that makes all older Americans winners

One idea mentioned in an article in The Hill suggests creating a national lottery for the purpose of eliminating Social Security's funding gap.

There may be some merit to this idea. Lotteries are highly lucrative, with some of the most attractive "house advantages" of any forms of gambling. For example, New Hampshire's lottery reports a 26% profit margin, after all payouts and expenses, and the proceeds are used to help fund the state's schools. California's lottery has made over $29 trillion since 1985. So it's fair to say that a national lottery could potentially generate some serious cash.

Of course, this would be easier said than done. A national lottery would almost certainly cut into the state lotteries, most of which fund essential programs like education, so setting up a new, national lottery system would require extensive research and compromise.

Outside-the-box thinking could be just what we need

While it's uncertain if any of these three solutions could fix Social Security's funding gap, or if they're even practical to implement, outside-the-box solutions like these are certainly a step in the right direction. As I mentioned, virtually all of the viable solutions that have been proposed in Congress have to do with benefit cuts, which are wildly unpopular, or tax increases, which would have to be pretty substantial to fix Social Security all by themselves.