It's no secret that Americans aren't afraid of debt. The average credit card balance among U.S. households is currently $5,700, but when we break down that data by age group, we see that many adults carry much more.

It's not surprising, therefore, to learn that debt prevents a large number of Americans from saving for retirement each year. In fact, 42% of workers say the reason they can't contribute to a 401(k) plan boils down to a need to keep up with credit card debt payments, as per a newly released study from Schwab Retirement Plan Services. Not only that, but those who aren't currently funding a 401(k) regret having taken on so much debt, not just because of its impact on their day-to-day lives, but because it could be the one factor that ultimately destroys their retirement dreams. 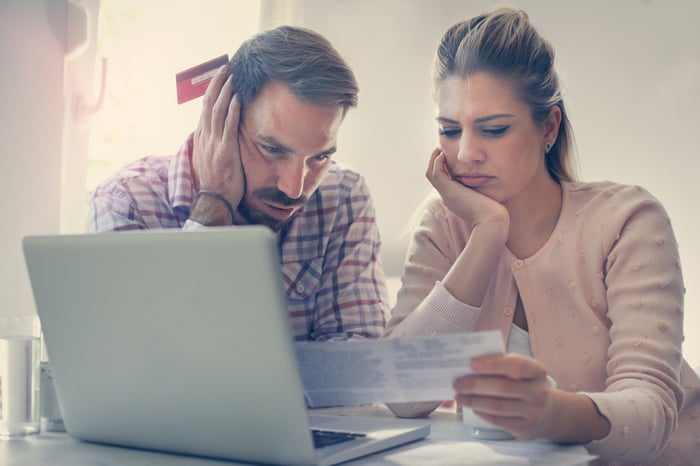 Whether you're just starting out in your career or have decades of experience under your belt, the one thing you should know is that it's imperative to start setting money aside for the future. And if you're not saving at present because your money is going toward debt payments instead, it's time to break that vicious cycle.

You should be earning money -- not your credit card company

It's ironic that the concept of compounding can work both for you and against you, depending on your circumstances. When it comes to retirement savings, compounding is your best friend, because it's what allows you to turn a series of relatively small contributions into a rather whopping sum over time.

Here's an example. Say you pledge to contribute $200 a month to an IRA or 401(k) over the next 30 years. After three decades, you'll have funded your account with $72,000 of your own money. But let's imagine you invest that cash and earn an average annual 7% return on it, which is more than feasible if you focus your portfolio on stocks. After 30 years, you'll end up with nearly $227,000 because you'll not only get to collect money from your investments, but reinvest that cash and earn money on your earnings.

Now clearly, it's far better to be in a position where you're using compounding to your advantage, as opposed to having it work against you. So if you're deep in the throes of debt, it's critical to start paying off what you owe and putting that money to better use -- namely, your retirement savings.

Fund your retirement account as soon as you can

Time is a critical factor in establishing a retirement nest egg, and the more of it you have, the more you'll benefit from the good kind of compounding. So if you're currently spending hundreds of dollars each month on debt payments, you're doing your retirement a major disservice.

Imagine you're currently paying $300 toward a credit card balance each month, and, as such, aren't funding a retirement account. Let's also assume you uphold this pattern for 10 years. At the end of the day, you won't just lose out on $36,000 in retirement cash -- you'll lose out on $36,000 plus whatever growth that money could've achieved. If we apply the 7% rate, that's more like $50,000 in lost retirement income.

But let's take a step back and forget about investment growth for a second. Yes, it's a shame to lose out on any amount of money. But if you don't save for retirement during your working years because your spare cash is tied up in debt payments, you'll essentially end up destroying your retirement. Most people these days don't have pensions, and Social Security isn't enough to sustain the average American -- so if you don't have an additional source of income, such as an IRA or 401(k), once you leave your career behind, you'll be seriously out of luck.

Getting into debt is easy; getting out of debt is an undeniable challenge. But once you eliminate those pesky payments, you'll have more money on hand to fund a retirement account, which, regardless of your age, should be one of your most pressing goals.

Of course, breaking free from debt takes money, so if cutting corners in your budget doesn't work, consider getting a side job, which could easily put more cash in your pocket. Once you have some money to work with, review your debts and focus on the ones that cost you the most. That means paying off a credit card charging 20% interest before dealing with one that charges 15%. Another option to consider is a balance transfer, with which you move from a higher-rate credit card to one with a lower rate.

No matter what steps you take to get out of debt, the key is to make it a priority so that you're able to shift gears as quickly as possible and begin focusing on retirement. Otherwise, you may have a tough road ahead as a senior.

How Badly Will Debt Wreck Your Retirement? @themotleyfool #stocks Next Article
Current