Countless working Americans look forward to retirement, so much so that they often aim to pull the trigger on it as early as possible. But new data shows that more seniors are unhappy in retirement than ever before.

In fact, over 10% of retirees consider themselves "not at all satisfied" with their lifestyle, which is the highest this metric has been in roughly 20 years. And while some of that might boil down to health issues or social factors, a big part of it no doubt has to do with money. 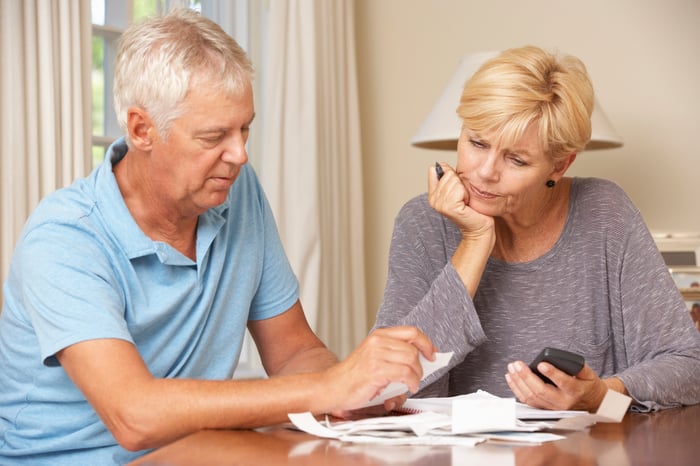 Though retirement does represent an extended period of leisure for many Americans, it's also, for plenty of folks, a period of financial stress. With that in mind, here are three major money mistakes retirees tend to make -- and ways to avoid each one.

1. Not adjusting your lifestyle

Many people grow accustomed to a certain standard of living during their working years. Of course, there's nothing wrong with owning a large home and nice car if you earn enough money to pay for those things. But once retirement rolls around, you'll be limited to a fixed income, and if your savings aren't enough to support your old lifestyle, you'll need to start making adjustments.

Unfortunately, many seniors wind up spending more money, not less, during their early retirement years, and as a result, they drain their savings more rapidly than expected. Even if your spending level doesn't increase, unless you've truly saved a bundle, there's a good chance you can't actually afford your old lifestyle, but rather, need to start cutting back to maintain a healthy cushion.

To avoid the stress that comes with overspending and depleting your savings too quickly, create a new retirement budget, and identify ways to trim your expenses. This might mean cooking more often instead of dining out -- which, if you're no longer working, you'll thankfully have more time for. It might also mean downsizing to a more economical living space if your current home is costing you a fortune. No matter what adjustments you make, the key is to be realistic about what your new income level will buy you. And the earlier on in retirement you figure that out, the better.

While many seniors do see their tax bills go down once they enter retirement, others are surprised by how much they ultimately end up owing the IRS. If you're withdrawing funds from a traditional IRA or 401(k) to cover your expenses, you should know that those distributions will be subject to taxes. The same holds true for investments gains, interest payments, or dividends that stem from a traditional brokerage account.

Furthermore, there are 13 states that tax Social Security benefits to varying degrees. Now if your total income is low enough, you might qualify for an exemption, but if not, you'll face taxes at the state level as well.

Knowing what to expect tax-wise can help alleviate the stress that comes with writing the IRS a giant check come April. In fact, remember that new budget we talked about earlier? You should incorporate taxes into it as well so that you're setting money aside each month to cover your total IRS bill.

Unless you're housing your retirement savings in a Roth account, you can't just leave that money in there forever. Rather, you must start withdrawing from your savings once you reach age 70 1/2. Your required minimum distributions, or RMDs, will depend on your account balance and life expectancy at the time, but if you ignore them, you'll face a 50% tax penalty on any amount you fail to withdraw. For example, if your RMD is $6,000 and you neglect to take it, you'll lose $3,000 of your hard-earned savings off the bat.

That's why it's crucial to pay attention to RMD deadlines. Your first RMD must be taken in full by April 1 of the year following the calendar year during which you turn 70 1/2. This means that if you turn 70 in February 2018, you'll need to take your first RMD by April 1, 2019, with all subsequent distributions coming due by December 31 of each year that follows. Though RMDs can be a pain if you don't need the money -- namely, because they trigger taxes -- disregarding these deadlines could end up being an extremely costly mistake.

Your best bet for a happy retirement is to eliminate as much financial stress as possible. Avoid these mistakes, and you're more likely to enjoy retirement to the fullest.