Retirement may be a dream for most people, but it doesn't come true for everyone.

Ah, retirement. Most people dream of the day they can walk out of their jobs and spend the rest of their lives relaxing and living the life they'd always wanted.

Unfortunately, retirement isn't all it's cracked up to be for some people, and others are lucky if they ever get to retire at all. In fact, a quarter of American adults say they don't think they'll ever retire, according to a TD Ameritrade survey.

And considering the fact that the median amount that American families age 56-61 have saved is just $17,000, it's not too surprising that so many people will be working their entire lives.

While there's no way to tell for certain whether you'll have enough saved to allow you to comfortably retire (at least for more than a year or two), there are a few signs that you may be off track for retirement. 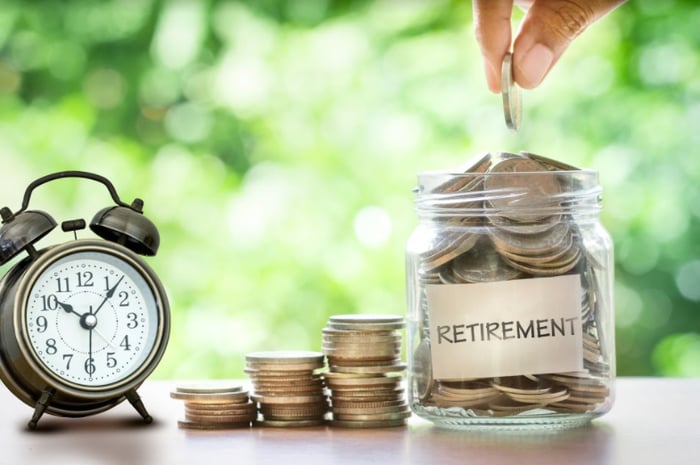 When you're young, you figure you have plenty of time to save for retirement. And when you have student loans, rent, car payments, and a (probably) meager paycheck, saving for retirement is understandably the last thing on your mind.

But saving even a few dollars starting at an early age can make or break your retirement fund thanks to the power of compound interest.

What if, however, you put off saving until you were 40 and still wanted to retire at 65? Even if you saved three times as much per week to catch up, you'd still have only around $205,000 by the time you retire.

That's not to say, though, that it's impossible to catch up. It's better late than never, so even if you've gotten a late start to saving, the longer you wait, the harder it will be to catch up.

2. You'll be relying on Social Security to make ends meet

The average Social Security check amounts to about $1,400 per month, though that number varies based on factors such as your retirement age and work history.

For some people, $1,400 per month is enough to live comfortably. But with the Social Security program on shaky ground, it's not a wise move to assume you'll be receiving $1,400 per month forever.

According to the Social Security Board of Trustees, the program is facing a cash shortage. With baby boomers retiring in record numbers with fewer younger employees replacing them in the workforce, the program is paying out more than it's taking in. And although Social Security won't come crashing to the ground (because as long as people keep paying payroll taxes, there will always be money in the program), there may be cuts in the relatively near future.

By 2034, the asset reserves will run dry, and retirees may see their benefits slashed by up to 23% -- that is, unless Congress comes up with a solution to the problem by them. While it's likely that cuts won't be quite this severe, it's still not a good idea to risk it and bet everything that the government will figure it out.

3. You're not taking advantage of employer 401(k) contributions

Your 401(k) is one of the most powerful retirement tools at your disposal, partly because of your employer's matching contributions. Employer contributions are essentially free money, so by not taking full advantage of them, you're inadvertently hurting your retirement fund.

But it's not just failing to claim your "free money" that can hurt your chances at retirement -- if you're not contributing enough to even earn your full match, you're probably not saving enough to retire.

While employer matches vary based on the company, most will match between 3% and 6% of your salary.However, most experts advise putting 10% to 15% of your income toward retirement.

While $303,000 is serious cash, if you're assuming you'll still need around $50,000 per year to cover your expenses, that money will only last you around 6 years. Of course, you may have Social Security benefits and (if you're lucky) a pension to supplement that income, but with the average retirement lasting 18 years, those supplements may not be enough for the long haul.

Retirement is a dream some people wait their whole lives for, so don't let it slip away by making these retirement mistakes. And even if you're off track right now, that doesn't mean you won't be able to retire. By realizing the areas where you can improve, you can adjust your savings accordingly to get back on track.