Are they telling the truth, or just making excuses?

There are numerous reasons Americans on a whole don't tend to do a good job of saving money. For some, it's a matter of unavoidable expenses, like healthcare. For others, it's a function of nagging debt. But whether our collective reasons for not saving boil down to valid points versus excuses, it's pretty safe to say that if we all somehow got our hands on more money, we'd be better positioned to save.

That's the question countless workers will no doubt find themselves asking in light of recent NerdWallet data, which found that even high earners claim they don't make enough to contribute to their savings. In fact, more than 30% of adults earning $100,000 or more per year say they'd need their income to increase to have a shot at saving money. Given that the median household in the country only earns about $56,000, it sure puts average workers at a key disadvantage. After all, if the rich aren't making enough money to save, how are the rest of us supposed to pull it off? 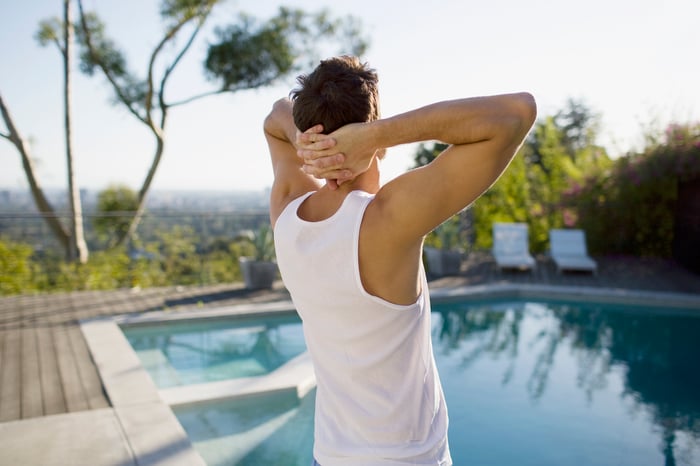 But here's the thing -- many lower earners do manage to save money, as do middle earners. So if you're among the country's wealthiest and aren't saving, it could be that the problem isn't your income, but rather, your spending.

A matter of money (mis)management

Though lower earners have some opportunity (though not necessarily a ton) to save money, it stands to reason that higher earners are in the best position to bank some serious bucks. After all, if the average rent in your area is $2,000 a month, and you're making $100,000 a year, you'll have more money left over to save than someone earning $50,000 a year, all other things being equal.

The problem, however, is that the rich also tend to live rich. Rather than opt to live below their means (even if ever so slightly), countless wealthy Americans choose to take on expensive mortgages, drive fancy cars, and indulge in the purchases and conveniences that make daily life all the more pleasant.

But the danger in this approach is that failing to save money will eventually come back to haunt these folks when retirement rolls around. The reason? No matter your earnings level, it's up to you to primarily fund your golden years. Social Security will provide some income, but it won't be enough to sustain yourself. The only way to get by in retirement is to have independent savings, and if you go too long without realizing this, you'll compromise your eventual financial security. Talk about a waste of a high salary.

Sure, it's tempting to spend your hard-earned money on things that bring you enjoyment. And this isn't to say you shouldn't treat yourself in moderation. But the fact that more than 30% of higher earners cite a lack of money as their primary reason for not saving means many don't have their priorities straight.

If you're one of them, here's a better idea. Map out a budget of your monthly costs. Compare that total to your income. See how much you're saving, and if the answer is "nothing," start reviewing your various expense categories and figure out which you can most easily cut. You don't have to give up every luxury you've grown accustomed to, but if you don't work on slashing some of your expenses, you're going to wind up dirt poor in retirement. There's no way around it.

Say your largest expenses at present are a $3,000-a-month mortgage payment, a $700-a-month car payment, and $850 a month in restaurant meals. If your goal is to save 10% of your salary, which should really be the minimum, and you're earning $100,000 a year, then you'll need to cut roughly $833 per month in expenses. To do so, you can pledge not to dine out at all, move to a less expensive house whose mortgage payment is $833 lower, or cut your restaurant and auto spending in half, and make a couple of minor tweaks elsewhere to cover the difference. You don't need to give up all of the extravagances you've come to enjoy in life, but you will need to decide which are the least and most important to you, and take it from there.

While earning $100,000 or more won't necessarily leave you rolling in dough, it should afford you a reasonable opportunity to set aside some money for the future. And if it isn't, then it's time to take a long, hard look at your spending and get your priorities back on track.