Now that we're deep into November, consumers everywhere are bound to start hitting the stores to get a jump start on their holiday shopping. And while it's great to embrace the holiday spirit, the problem with this time of the year is that it causes countless adults to wind up deep in debt. If you'd rather avoid that particular trap, here are a few major mistakes to sidestep.

1. Failing to set a budget

Just as you need a budget to keep tabs on your spending in life, so, too, do you need one to keep your holiday spending in check. Yet more than one-third of Americans don't bother creating a holiday budget. And that's silly, because doing so is easy. Just figure out how much money you'll have available for holiday purchases, come up with a list of expenses, and make sure the numbers align. If they don't, then you'll need to rethink what you're buying. Reducing what you spend in a single category, whether it's gifts, holiday attire, or decorations, could help you avoid racking up unwanted debt. 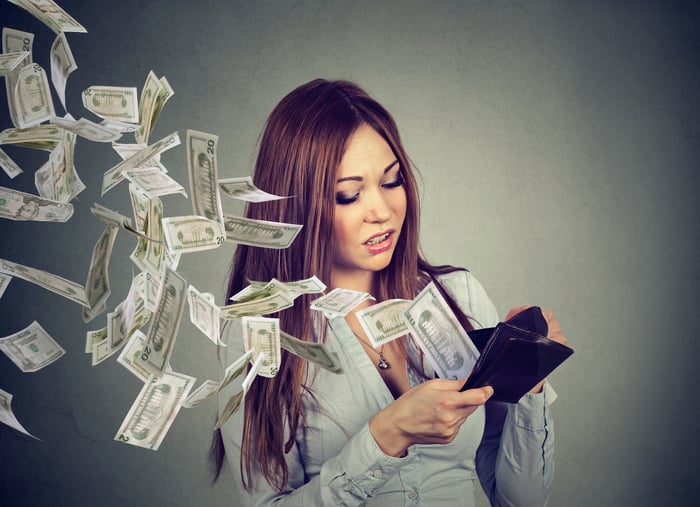 2. Setting a budget, but ignoring it

The fact that a good 65% of adults set a holiday budget is a good thing, but the fact that 77% of those same folks plan to exceed their budgets is a dangerous thing. Not only does going over your budget negate the benefit of creating it in the first place, but it also exposes you to the same level of debt as those who don't create one. If you're going to map out a budget, follow it -- even if that means forcing yourself to shop only with cash to avoid the temptation that comes with having a credit card.

3. Not maximizing your credit card rewards

Though credit cards often cause consumers to overspend, when used wisely, they offer numerous benefits that cash alone can't match. However, countless shoppers fail to take advantage of those benefits by skimping on the details of their rewards programs.

Some credit cards, for example, offer as much as 5% back on holiday purchases during the last quarter of the year, and all you need to do to snag that bonus is click a button and enroll. Yet many shoppers don't take 12 seconds out of their lives to do so because they assume those rewards will come automatically. Another common mistake shoppers make is letting rewards expire. This is especially common with store credit cards, which tend to impose greater restrictions than general credit cards. Pay attention to your cards' rewards programs and policies to avoid losing out on free money -- money that can certainly come in handy around the holidays.

There's nothing like the idea of saving money to lure you into shopping the sales. But here's the problem: Unless the sale items you buy are actual needs, or things that were already on your holiday shopping list, you're not going to save a dime by buying them. Quite the contrary -- you'll end up wasting money by buying things for the purpose of snagging a good deal.

Furthermore, keep in mind that the prices you see advertised around the holidays aren't necessarily the best deals out there. Many folks aim to shop on Black Friday, for example, because they're convinced they'll snag the deepest discounts. But according to The Wall Street Journal, most items are offered below Black Friday prices at different times during the year -- which means you won't benefit by dragging yourself out when you'd rather be nursing a post-turkey hangover.

Many consumers are quick to toss out their receipts once they bring their purchases home. After all, those receipts are just little bits of garbage taking up space in your wallet or purse. But unless you've paid with a credit card, throwing out or misplacing your receipts is a bad idea. That's because without those pesky pieces of paper, there's no legitimate record of your purchases, which leaves you with much less recourse in the event something you buy is damaged or defective. A better bet is to retain copies of your receipts, and if you're worried they'll somehow go missing, snap photos of them and store that evidence electronically. That way, you'll have a leg to stand on if you wind up needing or wanting your money back.

If you're not careful, the shopping you do this season could end up costing you more money than necessary. And in many cases, it could end up driving you into debt. Avoid these mistakes, and you'll have less financial stress to deal with when the holidays come to a close.