Please ensure Javascript is enabled for purposes of website accessibility
Log In Help Join The Motley Fool
Free Article Join Over 1 Million Premium Members And Get More In-Depth Stock Guidance and Research
By Maurie Backman – Dec 12, 2017 at 5:36AM

In the dark about Medicare? Here's how to break down all that mind-boggling lingo.

Countless seniors rely on Medicare for their health-related needs. But if you're first learning about the program, navigating its various terminology can leave your head spinning. Here are a few commonly used terms associated with Medicare and what they mean to you.

This is the amount you'll pay in exchange for coverage under Medicare. Most enrollees don't pay a premium for Medicare Part A. However, Parts B and D come at a cost. The average monthly Part B premium, for example, is $134. 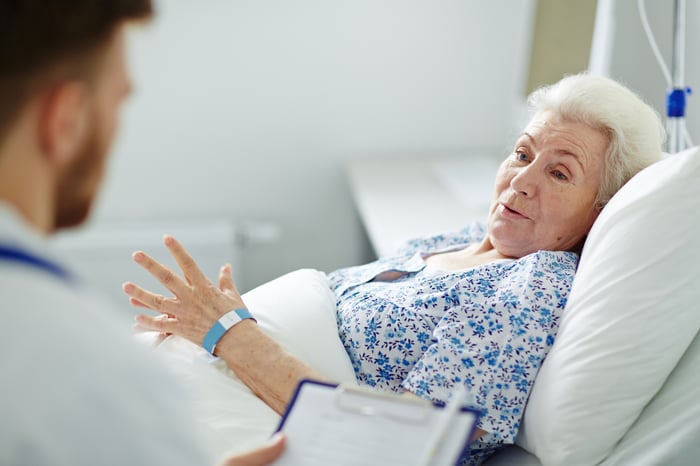 In general health insurance terms, a deductible is a sum of money you're required to pay out of pocket until your insurance company starts paying for your services. And as far as Medicare goes, it's the exact same thing. Enrollees who use services under Part A, for instance, currently have a $1,136 deductible per benefit period, and this number will climb to $1,340 in 2018. Part B, meanwhile, comes with an annual deductible of $183 that's slated to remain unchanged next year.

Again, these terms apply to Medicare and health plans in general. A copay (short for copayment) is the amount you're responsible for each time you utilize medical services or receive care, after your deductible has been met. Coinsurance is similar, only whereas copays come in preset amounts, coinsurance is calculated as a percentage of the cost of your service. With Part B, once your deductible has been met for the year, you'll typically be liable for 20% coinsurance, which means you'll pay 20% of the Medicare-approved amount for most services.

Your initial enrollment period refers to the period of time during which you're first eligible to sign up for Medicare. This period is seven months long, beginning three months before the month of your 65th birthday and ending three months after the month of your 65th birthday. If you fail to sign up for Medicare during your initial enrollment period, you'll still have an opportunity to do later. That said, it pays to sign up on time, because if you don't, you could see a 10% increase in your Part B premiums going forward for every 12-month period you were eligible for Medicare but didn't enroll.

Some eligible seniors get a special period during which they can enroll in Medicare without being penalized for missing their initial enrollment period. For example, if you're still working for a company with 20 employees or more during your initial enrollment period, and that company provides health insurance, you can hold off on signing up for Part B and also avoid the 10% penalty we discussed earlier. In this scenario, you'll be eligible for a special enrollment period that lasts eight months, beginning the month after you leave your job or the month your health insurance is terminated -- whichever happens first.

Many seniors assume that once they're on Medicare, all of their health-related needs will be taken care of. But actually, there are a number of services Medicare doesn't cover, and that's where Medigap comes in. Also known as Medicare Supplement Insurance, Medigap offers additional coverage on top of what plain old Medicare will give you. Though you'll pay for Medigap, it may be worth the cost if you expect to incur high noncovered healthcare expenses in retirement. But before you get too excited about Medigap, know this: Medigap plans typically don't cover common expenses also not covered by Medicare, such as long-term care, vision and dental services, hearing aids, and private nursing services.

Original Medicare refers to Parts A and B -- the former covers hospital visits, while the latter covers diagnostics, doctor visits, and preventative care. Now one thing original Medicare doesn't cover is prescription drugs -- you'll need a separate Part D plan for that. And as we just learned, it also doesn't cover things like long-term care expenses, eyeglasses, or dental work.

Medicare Advantage, on the other hand, combines Medicare Parts A and B into one plan, and typically covers services like vision, dental care, and hearing aids. Many Medicare Advantage plans offer additional benefits on top of these, and most cover prescription drugs as well.

Though you will pay a premium for Medicare Advantage, the right plan could save you money on your healthcare needs overall. Additionally, whereas your out-of-pocket spending under original Medicare is virtually limitless, Medicare Advantage plans have an annual out-of-pocket maximum, offering enrollees a greater degree of financial protection.

Getting acquainted with Medicare might initially make your head hurt, but understanding these key terms will help make things easier to digest. Furthermore, it pays to read up on Medicare and how it works so that you're best equipped to make the most of it once you're ready to enroll.