Countless seniors rely on Social Security to pay the bills in retirement. But if you're not careful, you could end up losing out on some of the money you'd otherwise be entitled to. As we prepare to start a new year, here are three glaring Social Security mistakes you should pledge to avoid at all costs.

1. Jumping the gun on benefits

If you're turning 62 in 2018, you may be tempted to file for Social Security right away and get your hands on the cash you're eligible for. But before you rush to claim benefits, you should be aware that if you file before reaching full retirement age, you'll reduce the amount you get to collect each month. 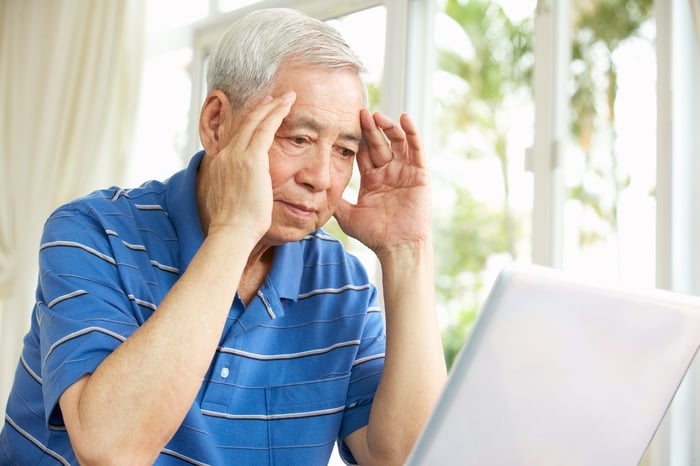 How much of a hit are we talking about? Say your full retirement age is 67, at which point you'd be entitled to $1,600 a month based on your personal earnings history. If you claim benefits at 62, you'll lower each payment to just $1,120.

Now if you're not really counting on Social Security to pay the bills in retirement, but rather just want the money sooner to use mostly for leisure purposes, then claiming benefits at 62 isn't such a bad idea. But if your savings level is poor and you need those benefits to stay afloat financially in retirement, then be sure to think twice before filing early and slashing your payments for life.

2. Delaying benefits when your health is poor

We just talked about the fact that filing for Social Security early is a move that can backfire in the long run. On the other hand, if you're diagnosed with a medical condition next year that shortens your life expectancy, and you're at least 62 at that point, then it actually pays to file for benefits rather than wait until the age you might've previously planned on.

Though Social Security is technically designed to pay you the same amount in lifetime benefits regardless of when you first file, that formula only works if you live an average life expectancy. If you have reason to believe that you'll pass away sooner than the average person your age, then it pays to jump on those benefits immediately.

If you're already collecting Social Security and suddenly have a payment go missing next year, don't wait to follow up on it. Thanks to the Equifax data breach that occurred earlier this year, countless Social Security numbers were left compromised, so if you don't receive a payment as scheduled, it could be that a criminal has gotten your information and has managed to divert your benefits to a new address. If that's the case, then you'll need to get on top of that issue before more of your money goes missing.

What should you do in this sort of scenario? Your first move should be to contact the Social Security Administration and get the issue on record. From there, you should be given instructions on what you'll need to do to verify your identity and prove that the criminal claiming to be you isn't. This could mean providing copies of old tax records, pay stubs, or even Social Security documents you formerly received. Convincing the Social Security Administration that you've had your benefits stolen could be a lengthy process that takes time to correct, so don't delay if you find that your payments suddenly stop.

Avoiding these huge Social Security mistakes can set the stage for not just a more prosperous 2018, but a healthier long-term financial outlook. So as the new year gets closer, pledge to read up on Social Security and familiarize yourself with how it works. Consider it a resolution you can easily keep.