Please ensure Javascript is enabled for purposes of website accessibility
Log In Help Join The Motley Fool
Free Article Join Over 1 Million Premium Members And Get More In-Depth Stock Guidance and Research
By Maurie Backman - Dec 18, 2017 at 7:09AM

Though you might want your money as soon as possible, filing for Social Security at 62 could end up hurting you -- and your family.

When we think about filing for Social Security, we're generally looking at an eight-year window that begins at age 62 and ends at age 70 (technically, you don't have to file once you reach 70, but there's no financial incentive to postpone past then). Now at first glance, 62 might seem like the most ideal age to take benefits, since it means getting your hands on them as soon as possible. But while there are a few valid reasons to claim Social Security at 62, going this route can also backfire. Here, in fact, are three terrible reasons to rush to take benefits at the earliest age possible.

1. You'll lower your monthly payments when you probably can't afford to be doing so

It's not a secret that Americans are behind on retirement savings across the board, but it's especially frightening to see how little near-retirees have put away. The Economic Policy Institute reports that the median savings balance among households aged 56 to 61 is a mere $17,000. Think about it: That's $17,000 worth of income over the course of what could be a 20-, 25-, or even 30-year retirement. What this means is that anyone in the same situation or similar will no doubt become reliant on Social Security upon leaving the workforce, and that's why it pays to get the most out of those benefits, not the least. 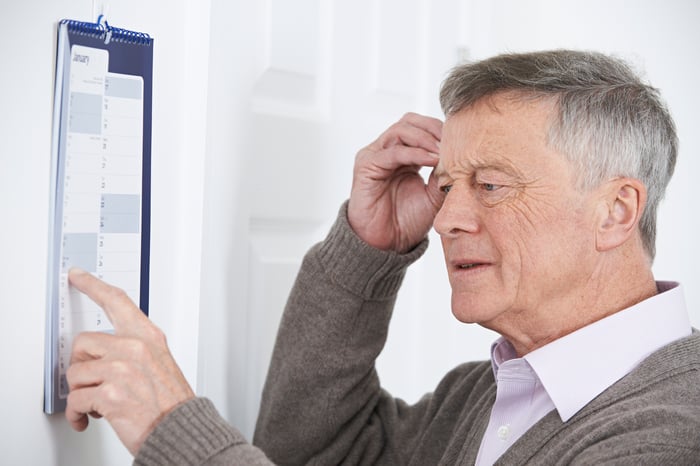 See, your Social Security benefits are calculated based on how much you earned during your top 35 working years. Once your monthly benefit amount is established, you'll get to collect it in full upon reaching what's known as full retirement age. Here's what that age looks like, depending on when you were born:

Today's workers have a full retirement age that falls between 66 and 67. Therefore, if you file for benefits at 62, you'll automatically reduce them.

Now let's say you're counting on Social Security to provide the bulk of your retirement income, and you'd normally be eligible for $1,600 a month starting at your full retirement age of 67. If you rush to file for benefits at 62, you'll lower each payment to $1,120. That's over $5,700 less per year in income, which is money you probably can't afford to forgo.

Incidentally, you'll get an 8% increase in benefits if you hold off on filing past full retirement age, up until age 70. If your savings situation is truly abysmal, it might actually pay to wait until 70 and boost your monthly payments to the fullest extent possible.

2. You'll leave a surviving spouse in the lurch

We just learned that filing for Social Security at 62 will lower your monthly payments. But what's interesting about Social Security is that it's designed to pay you the same amount in lifetime benefits regardless of when you first claim them. This formula, however, assumes an average life expectancy. If your health is poor, then it often pays to file for benefits as early as possible -- assuming you only have your own needs to think about. On the other hand, if you're married, and your spouse is relying on those benefits too, then filing at 62 could end up backfiring.

Imagine your health isn't great, and so you want to get at those benefits as soon as you possibly can. What you need to realize is that once you pass away, your spouse will be eligible to collect your benefits in full, provided he or she waits until full retirement age to take them. If you lower your benefits by filing at 62, and your spouse then outlives you for another 20 years, he or she might wind up collecting considerably less income. So even though waiting to file might cause you to see a lower lifetime payout, from a family perspective, you might come out ahead.

If you're nearing retirement and are convinced that Social Security will soon run out of money, you're not alone. An estimated 78% of adults over 50 worry that Social Security won't be around when they need it. But contrary to what you may have heard, Social Security is by no means going broke. Though it's facing a financial crisis, the program still has the means to sustain benefits for another 16 to 17 years.

Now the latest projections do tell us that come 2034, recipients may start to see less money in their benefits if Social Security's problems aren't resolved by then. But even in a worst-case scenario, you'd still be looking at 77% of your scheduled benefits, which is hardly the same thing as $0. Furthermore, Congress has more than a decade and a half to come up with a solution to Social Security's impending shortfall, so there's no need to jump the gun on benefits out of fear alone.

While some people will come out ahead by filing for Social Security at 62, it pays to consider the reasons that claiming benefits that early is a horrible idea. If you're reliant on that income, have a surviving spouse to think about, or only want your money sooner because you believe the rumors that Social Security is going away, be sure to rethink your strategy before pulling the trigger.