Please ensure Javascript is enabled for purposes of website accessibility
Log In Help Join The Motley Fool
Free Article Join Over 1 Million Premium Members And Get More In-Depth Stock Guidance and Research
By Maurie Backman - Dec 18, 2017 at 10:36AM

When you're deep in debt, declaring bankruptcy might seem like the quickest solution to your problem. But there are consequences associated with filing for bankruptcy that you need to be aware of first.

When you're drowning in debt and the bills seem to just keep piling up, it's tempting to do whatever it takes to bust out of that hole. And in some cases, that could mean filing for bankruptcy.

There are actually two types of personal bankruptcy filings you might consider: Chapter 7 and Chapter 13. Chapter 7 is essentially a personal liquidation -- your major assets are sold off, and the proceeds are used to wipe out your existing debt (though not all of it). Chapter 13, on the other hand, works more like a repayment plan, where your debts are consolidated and reorganized so that they're easier to pay off. 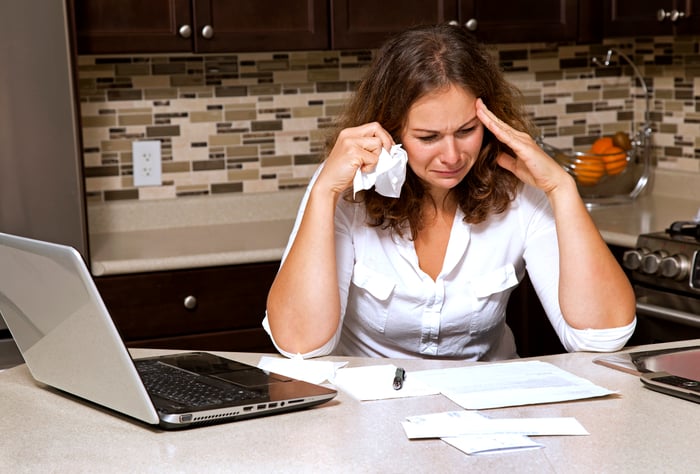 Now at face value, both options might seem pretty good. But before you file for Chapter 7 or 13, remember this: Either type of bankruptcy will impact your credit score and result in associated financial consequences. It therefore often pays to seek out alternate solutions before jumping into a bankruptcy filing.

The downside of filing for bankruptcy

Many people view bankruptcy as a get-out-of-jail-free card of sorts. After all, you simply file some paperwork in court and call it a day. The reality, however, is that bankruptcy can result in a host of financial repercussions.

First of all, bankruptcy filings cost money. You'll need an attorney to guide you through the process, and that alone can cost several thousand dollars on top of filing fees. But what's just as important to note is the fact that bankruptcy filings stay on your credit record for quite some time -- seven years in the case of Chapter 13 and 10 years for Chapter 7. This means that if you file, you'll likely encounter difficulties renting an apartment, getting a car loan, or buying a home for the better part of a decade, or an entire decade, depending on which option is more suitable for you.

Another thing many people don't realize? It's perfectly legal for companies to access your credit history before extending a job offer, and some might actually go so far as to deny you employment because there's a bankruptcy on your record. True story.

Finally, bankruptcy may not be the effective debt elimination solution you expect it to be. There are several types of debt that can't be discharged under bankruptcy, and these include common ones such as overdue taxes, student loans, alimony, and child support. Now it happens to be that most Americans who file for bankruptcy do so for other reasons -- namely, medical debt -- but you should still be aware of what a filing will and will not help you with.

A better way out

Before you rush to declare bankruptcy, it pays to consider some alternatives that won't affect your credit score for seven years of your life or longer. For one thing, you could try negotiating with your existing creditors, either on your own or via an attorney. Why might a creditor be willing to arrange a settlement? It's simple -- to get some money out of you. Depending on how a bankruptcy plays out, that creditor might otherwise not see a dime. If you're able to get your debt payments lowered, or a portion of them wiped out, you'll have an easier time keeping up while avoiding bankruptcy in the process.

Another option? Get a side job to generate more income, and use it to pay down your existing debt. You could also try scaling back on living expenses to achieve the same goal, provided there's some degree of wiggle room in your budget.

Though filing for bankruptcy might seem like the easiest and most painless solution to a serious debt problem, it's a decision that could end up haunting you for many years to come. While many folks have no choice but to declare bankruptcy, chances are, you'll be much better off in the long run if you manage to avoid it.