It's no secret that Americans regularly experience their fair share of financial stress. A good 85% of U.S. adults suffer from financial anxiety, a quarter of whom point to high levels of credit card debt as the primary cause. In fact, the problem has gotten so bad that credit card debt recently reached an all-time high in the country, with the typical balance-carrying household owing roughly $16,000.

But while it's one thing to carry high levels of debt and stress about it, it's another thing to actually lose sleep over it. Yet a large number of indebted Americans are apparently doing just that. In a recent study by Best Mattress Brand, Americans with more than $60,000 in debt were the most likely to report getting a mere five hours of sleep per night, whereas those with lower levels of debt consistently got more. Those with the highest debt levels also reported the lowest quality of sleep. 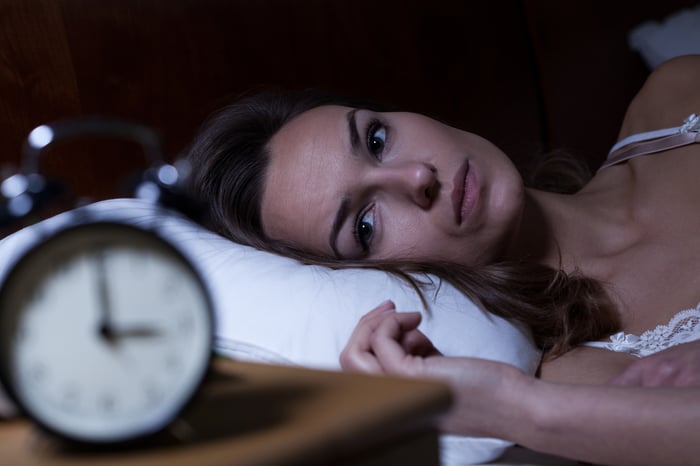 Not only can high levels of debt mess with your sleep but, apparently, they can also impact your dreams. Nearly 50% of adults with debt dreamt about coming into money -- talk about wishful thinking.

If you're drowning in debt, rather than lose sleep over it, it pays to come up with a plan for digging out of that hole. After all, your health depends on it.

Let's get one thing out of the way: If you're thousands of dollars deep in credit card debt, there's a good chance you won't manage to shed that burden right away (unless, of course, your dreams come true and you do indeed come into a windfall). That doesn't mean you won't start to feel better about things once you see that balance slowly but surely start to drop.

Your first step in eliminating debt should involve examining your outstanding bills and seeing which are costing you the most in interest. You may be tempted, for example, to pay off a credit card with a $500 balance before tackling a separate $4,000 debt, but if the former comes with a lower interest rate than the latter, you should actually switch gears and tackle that costlier sum first.

Another option? See about consolidating your outstanding debts, and lowering your interest rate in the process. If you manage to qualify for a balance transfer, you could end up saving money on interest while making the debt management process easier on yourself.

Once you figure out which debts you're going to pay off first, your next move is to come up with the money to do so. And in that regard, creating a budget can really help. Most adults don't follow a budget, but without one, you'll have no easy means of tracking your spending and identifying ways to cut corners. Rather than wing it, sit down for an hour and create a budget that maps out your current spending. From there, it's a simple matter of choosing which expenses you're willing or able to cut to free up cash.

Now if you find that slashing expenses does the trick in helping you pay down your debt at a reasonable pace, fine. But if you're really deep in the hole, that probably won't be the case, at which point it's time to consider getting a side hustle. A good 44 million Americans are currently working a secondary gig on top of their regular jobs, and it's helping them pocket a substantial amount of cash. If you owe, say, $9,000 in credit card debt but get a side hustle that puts an extra $600 a month in your pocket, you'll have that balance paid off in roughly 15 months. Cut expenses simultaneously, and you may very well end up debt-free within a year.

If your debt is keeping you up at night, it's time to attack the problem head-on rather than continue to let it deprive you of that much-needed sleep. So come up with a plan for unloading that debt, and follow it till you're free and clear. Your body will thank you for it later.