With tax reform monopolizing much of the news these past few months, it's not shocking to learn that countless Americans have IRS matters on the brain. But what is surprising is that so many folks don't seem to know when these changes will take effect.

Nearly three-quarters of Americans think the new tax reform bill will impact the current year's return, according to a recent survey by Liberty Tax Service. Specifically, close to 50% expect to see their 2017 taxes go up, while 22% expect to see their taxes go down, as a result of the latest changes. 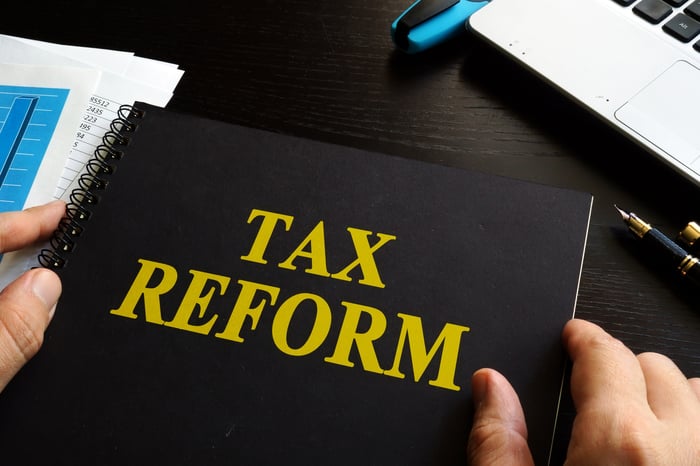 The reality, however, is that they're all wrong. While the soon-to-be implemented changes will impact your 2018 taxes, they don't apply to the current year. That said, there are a few things you can do to lower your 2017 tax bill -- provided you act quickly.

Though the charitable contributions deduction won't be going away next year, any donations you make in 2018 will only serve the purpose of helping out with your 2018 taxes. If you want to lower your taxes for the current year, then you'll need to get moving on those donations before 2017 draws to a close.

Keep in mind that it's not just cash donations that'll help your taxes. If you donate goods to a registered charity, you can take a deduction for their fair market value, which is the amount they'd go for in their present state. (In other words, if you donate a three-year-old coat you initially bought for $200, you can't take a $200 deduction; rather, you can deduct what that coat would sell for today.)

You're also allowed to claim a deduction for the money you spend volunteering. If you're running a late December food drive at your church, for instance, and you spend $30 of your own money on packing supplies, you can write that amount off on your taxes.

While many folks are naturally inclined to be more charitable around this time of the year, if you have reason to believe that you'll owe money on your taxes -- say you just got a larger-than-expected bonus, or sold some investments at a profit -- then it pays to offset that extra income with some last-minute donations. It's a great way to give back and shield money from the IRS at the same time.

The mortgage interest deduction is mostly staying in place for 2018, albeit at a lower threshold. But that doesn't mean you shouldn't further capitalize on that deduction for the current year. If you're worried that you've underpaid your 2017 taxes, a good way to compensate is to sneak an additional mortgage payment in before the end of the year. That way, you'll get to write off the associated interest, thus lowering your taxes.

3. Throw some additional money into your 401(k)

If you're looking for a way to lower your 2017 taxes while also benefiting yourself in the future, then now's the time to stick some last-minute money into your 401(k). That said, you should know that in some cases, it may be too late, especially if it takes several pay cycles to implement 401(k) changes at your company. But if your employer can accommodate your request, you'll be doing yourself a big favor by boosting your final 401(k) contribution for the year.

If you sold investments this year at a profit, then you'll need to factor capital gains taxes into your final IRS bill. On the other hand, if you have investments sitting in your portfolio that aren't doing particularly well, selling them by the end of the year could get you out of paying those gains. That's because investment losses serve the key purpose of offsetting gains, and if your losses equal your gains, they'll completely cancel each other out.

Furthermore, if your net losses exceed your net gains, you'll get the option to apply $3,000 against your ordinary income. But don't wait -- if you don't unload those investments in the next week, they won't help you as far as your 2017 return goes.

As you anxiously await the tax changes that are set to take effect in 2018, spend a little time working to lower your tax burden at present. That way, you'll have one less tax-related item to stress about going into the new year.