Of all the milestones you'll reach in life, 62 may not seem like the most significant. But actually, turning 62 could mean several things as far as your retirement goes. Here are a few things you should know if you'll be 62 this year.

1. You can start taking Social Security benefits -- but that may not be the best idea

One reason why so many people celebrate the idea of turning 62 is that it's the earliest possible age to collect Social Security. Not surprisingly, it's also the most popular age to file for benefits. But while you may be tempted to start taking those benefits the moment you're eligible, you should know that doing so has consequences. 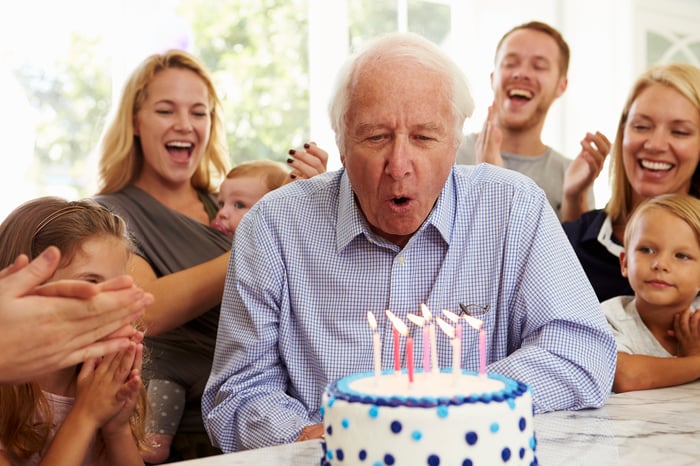 For one thing, filing for benefits before hitting full retirement age will result in an automatic reduction in your monthly payments. This means that if your full retirement age is 66 and change, and you file at 62, you'll reduce your payments by over 25% -- for life.

Not only that, but taking benefits at 62 could mean losing out on several years of higher earnings that work to boost your monthly payments. See, your Social Security benefits are calculated based on your 35 highest years of earnings in the workforce. If, come 62, you find that you're earning significantly more than you did in years past, but you decide to file for Social Security and quit your job simultaneously, you'll lose out on a few years of higher income, and the higher benefit payments they'd produce.

But that's not the only reason to think twice before taking benefits at 62. Most Americans in their early 60s are woefully behind on retirement savings. If you're counting on Social Security to provide a large chunk of your retirement income, then you should consider not only waiting on benefits but ramping up your savings efforts in the process.

2. You should have roughly nine times your income socked away

Though there's no single retirement savings balance all 62-year-olds should aim to have, as a general rule, it's wise to have about nine times your current salary socked away by that point. That's what financial services company Fidelity advises, and it's a pretty good goal to work toward. This means that if your salary is $100,000, you should, ideally, have $900,000 set aside for retirement by age 62. If you're not even close, then consider it a serious wake-up call to ramp up your savings game -- and postpone retirement to a later age.

Keep in mind that this formula isn't perfect. If, say, you're planning to work part-time in retirement and generate a fair amount of income that way, you may not need quite as much money in your IRA or 401(k). But if that's not the plan, and you've only saved, say, four times your current salary by age 62, then take it as a sign that you have some catching up to do.

Luckily, the tax code allows for that, as workers 50 and over are able to contribute more to their retirement plans than their younger counterparts. If you have a 401(k), you can sock away a cool $24,500 annually starting in 2018. If you're working with just an IRA, your annual contributions max out at $6,500, but you can explore other savings vehicles, like annuities or traditional brokerage accounts, if you're able to set aside more than that. In any case, be aware of the benchmarks you should be aiming for savings-wise so that you're not left cash-strapped once you decide to leave your career behind.

3. You shouldn't let your work skills fall by the wayside

Maybe you're not ready to retire at age 62, but rather, figure you'll coast through work for another four or five years before pulling the trigger. But while that might seem like a great plan in theory, it may not work out so well in practice. That's because a surprising 60% of U.S. workers end up being forced to retire earlier than planned, and job loss is certainly a contributing factor to that statistic.

That's why it's crucial to keep your skills current during the latter part of your career, especially if you're planning to work longer than most. If you hold any certifications, make sure they're up to date. If you've lost touch with key business contacts through the years, review your files and start reaching out. And for the sake of job security, be sure to continue adding value at your company, whether it's in the form of heading up major projects or offering up creative solutions to existing problems. Unfortunately, older workers are particularly vulnerable to job loss, so if you're not planning to exit the workforce anytime soon, take added steps to protect yourself.

While 62 may not seem like all that big a deal, it's actually a pretty important age on the road to retirement. Keep the above points in mind as you navigate what will hopefully come to be a very rewarding year.