Please ensure Javascript is enabled for purposes of website accessibility
Log In Help Join The Motley Fool
Free Article Join Over 1 Million Premium Members And Get More In-Depth Stock Guidance and Research
By Maurie Backman - Jan 9, 2018 at 6:36AM

Is filing for benefits ahead of schedule a bad idea? Not always.

Look around the internet and you'll come across countless articles urging you not to file for Social Security ahead of schedule. Heck, I've written several myself. But as is the case with many financial matters, there are always exceptions to the rule. In fact, in just a minute, I'll review some scenarios where claiming benefits early absolutely makes sense.

But first, what does claiming early even mean? To understand what on earth I'm talking about, you'll need a quick review of how Social Security works. 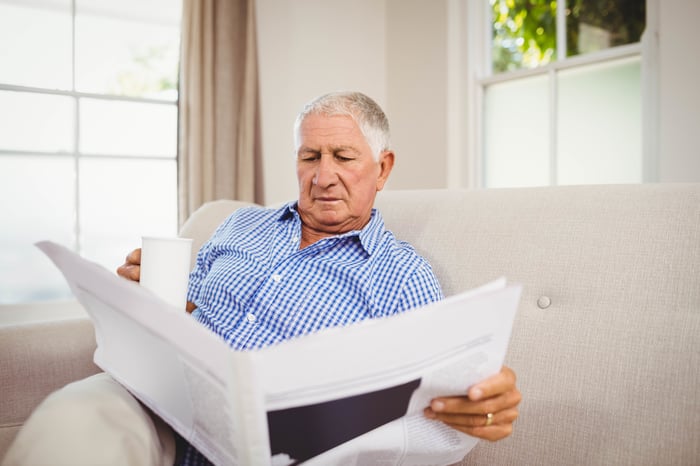 Your Social Security benefits are calculated based on your top 35 years of earnings. Once your monthly benefit amount is established, you'll be eligible to collect it in full upon reaching full retirement age (FRA), which, for anyone born in 1943 or later, is 66, 67, or somewhere in between.

That said, you don't have to file for benefits at FRA -- you actually get an eight-year window to claim them starting at age 62 and ending at age 70 (well, technically you don't have to file at 70, but there's no financial incentive to wait longer than that). Now if you hold off the maximum amount of time, you'll end up boosting your benefits substantially. But if you file early -- meaning prior to FRA -- you'll lose a portion of your benefits for each year you claim them ahead of schedule.

How much money are we talking about? Say your FRA is 67 and your monthly benefit amount is $1,600. If you file at age 62, you'll lower each payment to $1,120. And if you're counting on those benefits to pay the bills in retirement, that sort of reduction can really hurt.

That said, claiming benefits early isn't always a bad idea. Here are three reasons to snag them as soon as you possibly can.

1. You're out of work and need the money

If you're in a situation where you're out of work and don't have enough income to pay your bills, then filing for Social Security is pretty much a no-brainer, even if you're doing so several years before reaching FRA. Though you will face the reduction in payments we talked about, it's a far better move than racking up debilitating credit card debt to cover your expenses.

Here's a little-known fact about Social Security: The program is actually designed to pay you roughly the same amount in lifetime benefits regardless of when you first file. That's because while filing early will slash your payments, you'll also get more of them. On the flip side, holding off on benefits past FRA will cause them to increase, but you'll collect fewer payments. This formula, however, operates on one key assumption -- that you live an average life expectancy. If you pass away sooner, you could end up losing out on lifetime benefits by not claiming them as early as possible.

So let's go back to the above example: Your FRA is 67 and your full monthly benefit amount is $1,600. If you end up living until about 78 1/2, you'll collect roughly the same lifetime payout regardless of whether you file at FRA versus age 62. But if you end up passing away at 73, you'll end up with over $32,000 less if you don't take benefits as early as possible.

Though it's never comfortable to think about our own mortality, the fact of the matter is that you stand to lose out on benefits by not facing reality. If your health is in bad shape, and your life expectancy is lower than average, then it pays to claim Social Security as early as you can.

3. You want to start your own business

Many of us are quick to associate retirement with not working. But actually, a growing number of seniors are using it as an opportunity to venture out on their own. The Kauffman Index of Entrepreneurship reports that 55- to 64-year-olds comprised 24% of new entrepreneurs in 2016. And seniors 65 and older are more likely to be self-employed than any other age group, according to the U.S. Bureau of Labor Statistics. If filing for Social Security early allows you to kick off a moneymaking opportunity, then it pays to access those benefits when you want them, especially if you're having trouble securing an affordable business loan.

Now in this particular scenario, you'll want to come in with not only with a solid business plan but a reasonably healthy level of savings. But assuming that's the case, if your venture does well enough, the profits you reap might more than make up for the reduction you face in benefits.

Of course, none of this should be construed as an invitation to file for Social Security before FRA without considering the consequences. But if you fall into one of the above categories, I certainly wouldn't yell at you for claiming benefits early.