Though 62 remains the most popular age to start collecting Social Security, there are plenty of filers who opt to take their benefits later. Some choose to wait until full retirement age in order to avoid a reduction in payments. Others might opt to wait even longer and accrue delayed retirement credits in the process. But there comes a point where it no longer pays to hold off on filing for benefits -- specifically, age 70. Though you're not compelled to sign up for Social Security at that time, delaying will only cause you to lose money -- money you're entitled to.

How monthly benefits are determined

The amount you collect from Social Security each month is a function of two things: your 35 highest years of earnings, and the age at which you first start taking benefits. The first part of the equation is fairly simple. A formula is applied that establishes your full monthly benefit amount based on your income during your 35 highest years of earnings on record. For example, your monthly benefit might equal $1,600 if that's what your earnings history dictates. Whether you actually end up collecting $1,600 a month, however, will depend on when you first take benefits. 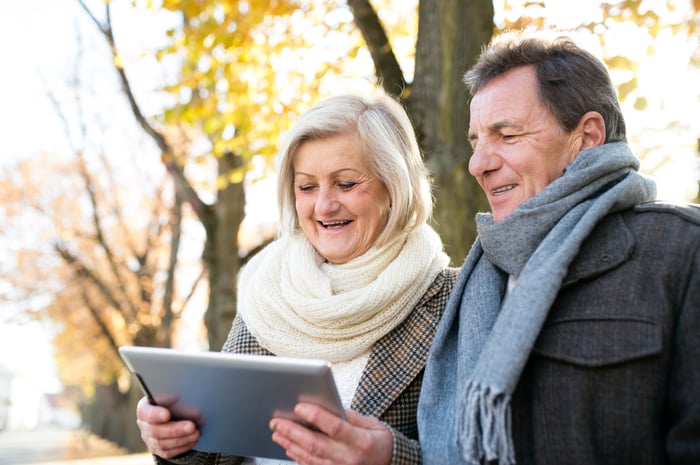 If you file for Social Security at full retirement age, which for today's workers is 66, 67, or somewhere in between, you'll get the full monthly benefit amount you're entitled to. In our example, that's $1,600. However, as stated earlier, most Social Security recipients begin collecting benefits at 62, since it's the earliest age to file. Now, let's say that your year of birth puts your full retirement age at 66. If you were to file at 62, you'd reduce your monthly $1,600 payments to $1,200 apiece. On the other hand, if you hold off on taking benefits past age 66, you'll increase your payments by 8% for each year you wait. This means that if you file at 69 instead of 66, you'll wind up collecting $1,984 per month instead of $1,600.

There's just one catch: The delayed retirement credits you get for waiting on benefits stop accumulating once you reach 70, which means there's no incentive not to file for Social Security at that point. However, nobody's going to force you to file either, which means you'll need to be proactive to avoid losing out on money that's rightfully yours.

Some seniors end up filing for Social Security after age 70 because they think they can continue accruing delayed retirement credits. Others don't file by their 70th birthday because they simply forget. But if you come to find that your 70th birthday has already passed and you're still not collecting benefits, be sure to file at once. The good news is that Social Security will pay up to six months' worth of retroactive benefits, so if you catch your mistake fairly early on, you might avoid losing out on money you're otherwise entitled to. But if you wait past age 70 1/2, you'll end up forgoing benefits for no good reason.

Should you plan to file at 70?

Clearly, waiting until age 70 to claim Social Security will result in your highest possible monthly benefit. But that doesn't mean that by doing so you'll wind up with your greatest total lifetime benefit. One thing many people don't know about Social Security is that it's designed to pay you the same lifetime amount regardless of when you first file. The logic is that while filing early reduces each payment you get, it also increases the number of payments you get. Conversely, waiting until 70 to take benefits decreases the number of payments you get, but boosts each individual payment.

This formula, however, operates under the assumption that you'll live an average lifespan. If your health is poor, you could end up losing money by waiting until 70 rather than filing earlier. Therefore, if you're in your early to mid-60s and are diagnosed with an illness that shortens your lifespan, or just don't have great health to begin with, it generally pays to file as soon as possible.

There are other reasons not to wait until 70 for Social Security. If you lose your job prematurely or come to need the money, you're better off taking your benefits sooner than racking up costly credit card debt. Furthermore, if you don't need the money in your early to mid-60s, but rather want the money to travel or enjoy the earliest stages of retirement when your health is optimal, it often pays to file earlier than 70, provided you have a healthy nest egg to fall back on.

Otherwise, 70 is a pretty good age to collect benefits, as it'll result in the maximum monthly payout you can get. Just don't make the mistake of waiting past that point.