Please ensure Javascript is enabled for purposes of website accessibility
Log In Help Join The Motley Fool
Free Article Join Over 1 Million Premium Members And Get More In-Depth Stock Guidance and Research
By Maurie Backman - Jan 30, 2018 at 8:04AM

Are you worried about taxes? Here's how to make the process less harrowing.

Most of us hardly look forward to tax season, but the majority of Americans are apparently all-out dreading it. An estimated 52% of U.S. adults find the tax-filing process stressful, according to a just-released TaxSlayer survey. But a lot of that sentiment boils down to feeling unprepared and ill-equipped to handle their returns correctly.

If you're anxious about getting your taxes done, you should know that there are certain things you can do to make the process less harrowing. Here's how to start. 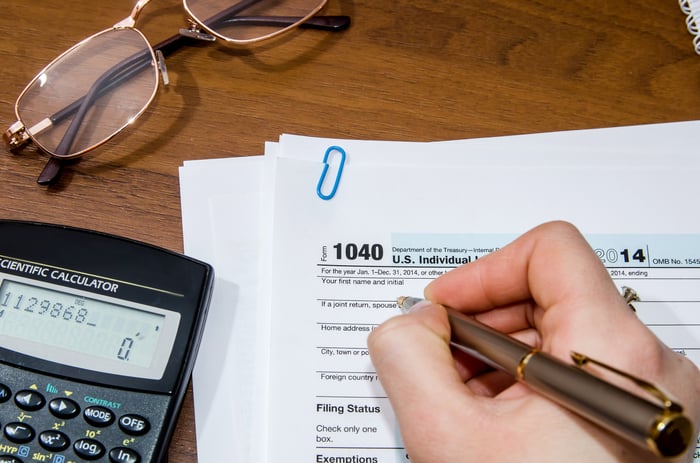 1. Know what documentation you need

One of the most stressful aspects of preparing a tax return is figuring out what items you need to get it done. Now you should know that if you're planning to claim the standard deduction on your 2017 return, you'll have a lot less legwork to do than if you're itemizing. Either way, you'll need to report any income you earned during the year, which means you'll need the following forms:

In addition, you may need documentation summarizing the following items as they apply to 2017:

With the exception of estimated tax payments and retirement plan contributions, which you'll need no matter what, you'll want to gather details on the above items if you're planning to itemize on your return.

2. Give yourself plenty of time

It's easy to get stressed about filing your taxes when it seems like you're rushing through the process. A better bet? Start early, especially if you're planning to itemize and therefore need additional time to go through your various expenses and receipts.

TaxSlayer reports that only 18% of taxpayers typically file in January each year despite the fact that returns can generally be submitted toward the end of the month. Similarly, 18% file in April or later, with procrastination being the No. 1 reason for waiting so long. But if you get moving on your taxes sooner, you'll have more time to follow up on missing forms and be more thorough in general, which can help you avoid making mistakes.

3. Use software or hire a professional

You don't have to be a math wiz to file a tax return. Generally, all you need to do is follow directions and copy the right information from one place to the next. That said, you're far less likely to make a mistake when preparing your return if you use some sort of electronic software. Case in point: Whereas the error rate for returns filed on paper is 21%, the error rate for electronically filed returns is less than 1%. Furthermore, many software platforms guarantee accuracy provided you follow their instructions, so if you go through the process slowly, you're less likely to make mistakes.

That said, if your tax return is particularly complicated -- say, you're combining a salary and small-business income -- then it might pay to hire a professional to prepare it for you. A professional might also identify certain tax breaks you wouldn't necessarily think of yourself, though be aware that most of today's filing software is actually designed to do the same.

4. Understand your options for paying your tax bill

Though the majority of Americans wind up getting a refund from the IRS, if you come to find that you owe money, you might rapidly start to panic, especially if you're looking at a sizable tax bill. But before you do, you should know that you can sign up for an IRS installment plan, which will allow you to pay your tax bill over time rather than fork over that entire sum all at once. Though you'll pay a fee for signing up for a plan (assuming it takes you 120 days or more to pay your debt), and you'll still pay interest on what you owe, the damage won't be nearly as severe as it would be if you were to charge your tax bill on a credit card.

If the idea of filing your taxes is making you sweat, take a step back and remember that as of right now, you have plenty of time to get the job done. So rather than stress, focus on getting organized, and with any luck, this year's filing will be your smoothest to date.