In-home care services and nursing homes are costly and aren’t covered by Medicare.

Long-term care, or LTC, insurance can help protect against these expenses if you or your spouse can no longer perform daily living activities such as bathing, dressing, and eating on your own. However, LTC insurance can be rather costly and isn't right for everybody. Here's a quick introduction to LTC insurance, what it covers and costs, and how you could keep your LTC insurance costs in line. 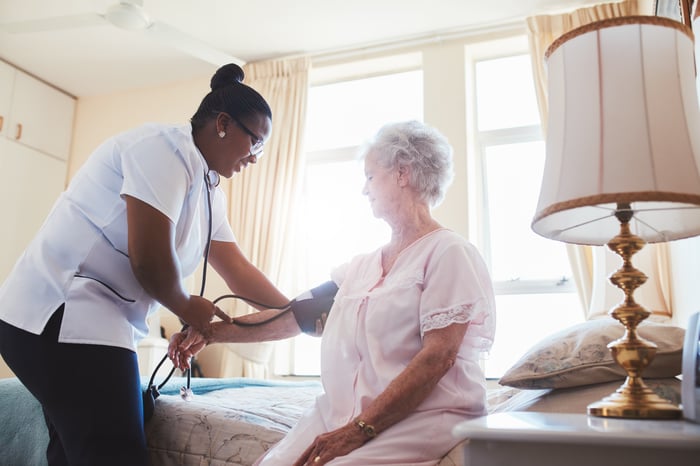 What is long-term care insurance?

Most health insurance covers things like hospital stays, medical procedures, doctors' office visits, and prescription drugs. However, the cost of long-term services such as nursing home stays is generally not covered. Even Medicare will only cover short stays in nursing homes, or some in-home care, but only under specific conditions.

What does long-term care insurance cover?

I already mentioned nursing home stays as one of the common expenses covered by LTC insurance policies. In addition, LTC policies generally cover the following:

Long-term care policies generally start paying benefits after you've waited through your policy's elimination period (more on that in a bit) and have met the "benefit trigger." This is typically defined in terms of Activities of Daily Living (ADLs) and most policies start paying once you need help with two or more of these, which include things like bathing, dressing, and eating.

Why long-term care insurance could be a smart idea

Simply put, long-term care services are expensive, and as I mentioned, are unlikely to be covered by other forms of medical insurance.

Furthermore, South Carolina is a relatively low cost-of-living state. In New York, for example, a private room in a nursing home averages nearly $143,000 per year.

It's also worth noting that individuals in poor health may not qualify for LTC insurance, especially if you are currently or have previously received long-term services.

The biggest downside to long-term care insurance is its cost. Sure, it's most likely cheaper than the benefits you'll get if you actually have to use it, but LTC insurance policies tend to have hefty premiums.

There are several variables that determine your cost of LTC coverage, such as:

Just to give you an idea of how much LTC insurance costs, the average annual premium for a 60-year-old couple is $3,490 for a plan with an initial benefit of $150 per day for up to three years and a 90-day elimination period, according to the 2018 Long-Term Care Insurance Price Index, prepared by the American Association for Long-Term Care Insurance.

Perhaps the best way to keep your costs down is to get your policy early. Obtaining LTC insurance at age 55 can be significantly cheaper than obtaining the same coverage at age 65. I mentioned earlier that the average premium for a 60-year-old couple is $3,490 in 2018. Waiting until age 65 results in a 34% increase, on average, to $4,675.

Speaking of savings, it's also a good idea not to overbuy LTC insurance. It isn't necessary to obtain coverage that will pay for 100% of your long-term care costs -- just the portion that your income (Social Security, pensions, income from savings) may not be sufficient to cover. This is one of the most important things to keep in mind. Buying only the amount of coverage you need can save you a tremendous amount of money.

Finally, it's worth checking to see if your employer offers LTC insurance plans. Employer-sponsored plans are often offered at discounted group rates, and you can generally keep the policy even if you leave employment.

For many retirees, long-term care insurance makes sense as a way to safeguard against the high potential costs of nursing homes, assisted living, and in-home health services. If you feel that a few thousand dollars per year is a fair price to pay for the peace of mind of knowing you'll be able to afford the proper care, LTC insurance could be a smart move for you.