Please ensure Javascript is enabled for purposes of website accessibility
Log In Help Join The Motley Fool
Free Article Join Over 1 Million Premium Members And Get More In-Depth Stock Guidance and Research
By Maurie Backman - Feb 4, 2018 at 11:02AM

It's one thing to be ignorant about taxes. But almost half of filers keep actively overpaying during the year -- and losing out in the process.

Each year, roughly 80% of workers have something to look forward to during tax season: a refund. In 2017, the IRS issued more than $300 billion in refunds on the previous year's tax returns, and at an average of $2,782 per filer.

But while getting a refund might seem like a good thing in theory, it's a problem in practice. That's because most people who get tax refunds can't afford to part with that money up front. Back in 2012, 84% of tax filers earning less than $25,000 a year received a refund, compared with 34% of those earning more than $200,000. But even if you're a middle earner, or a high earner for that matter, you should still aim to get more of your money in your paychecks, as you earn it, as opposed to waiting until tax season year after year. That's because that money is yours, and when you get a refund, all you're doing is lending the government that cash for nothing in return. 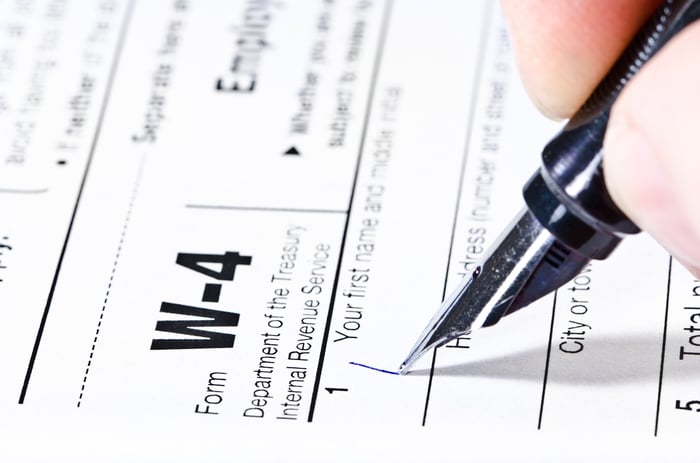 What might you do with that refund if it were to come in the form of a higher paycheck each month? If you're a lower earner, you might build some savings or avoid debt. If you're a higher earner with a solid financial cushion, you might invest that money throughout the year and grow it into a larger sum.

Instead, most Americans are willingly parting with their hard-earned cash, and while some of that might boil down to a lack of awareness, close to half of Americans actually know better. Specifically, a recent TaxSlayer survey found that almost 49% of filers believe they're pay too much tax during the year -- yet those same people aren't doing anything to change that going forward. And that only means one thing: Countless Americans will continue to wait longer than necessary for the money that's rightfully theirs.

Why do we keep overpaying our taxes?

Most people who wind up overpaying their taxes don't do intentionally, at least not from the start. One problem with our tax system is that it's very much a guessing game. You do your best to estimate your withholding on your income and hope that it's enough to mostly break even at the end of the year. But ultimately, there's no way to guarantee you'll get that number just right. And if given the choice between overpaying taxes and snagging a refund versus underpaying and owing the IRS, most people would much rather land in the former scenario.

Why? A big reason boils down to a general fear of owing money. It's estimated that only 39% of U.S. adults have enough cash in the bank to cover a $1,000 expense that's otherwise unplanned -- an expense such as owing that much to the IRS. It's also estimated that 39% of U.S. adults have no money in savings at all. Therefore, it stands to reason that most folks think they simply can't risk underpaying, and so they err on the side of giving up more of their income than necessary. In fact, in the above-mentioned survey, 27% of respondents admitted that if they were to owe money to the IRS in 2018, they wouldn't be confident in their ability to pay that debt.

Clearly, no one wants to wind up in a situation of owing money to the IRS and not being able to pay that bill. That's because the penalties for paying a tax bill late can really add up over time. But you don't have to let that fear of owing money prevent you from changing your ways. If you've historically received a refund, adjust your withholding so that you're getting more cash in your paychecks up front. Then, take that difference and stick it directly into a savings account. You can even arrange to have that money filter into savings automatically so you're not tempted to spend it. That way, if you do end up owing money on your taxes, you'll have a source for paying that bill. In the meantime, you'll have more options for using that money throughout the year, as opposed to waiting until tax season to get at it.

Imagine you encounter a $400 emergency in August, and that you've been stashing away your extra money to protect yourself in the face of potentially owing on your taxes. Rather than charge that expense on a credit card, you'll have the ability to withdraw it from savings and cover that bill immediately. From there, you can work on replenishing that amount, or a portion thereof, if you're truly worried you're underpaying your taxes.

Clearly, our tax system isn't perfect, particularly because it puts the burden on us, as taxpayers, to get our numbers just right. But no matter how you look at it, getting your money as you earn it is better than waiting up to a year to claim what's yours. So this year, take steps to avoid getting a refund, even if it means opening the door to owing the IRS a bit of money down the line. If you save accordingly, you'll get the best of both worlds: your money up front, and a clean slate come tax season.